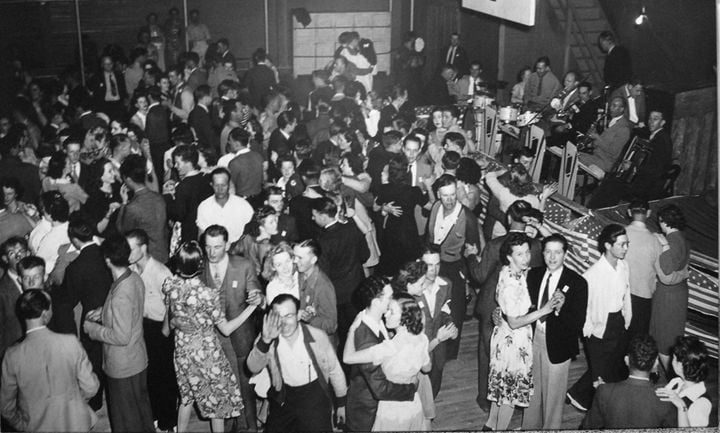 Taken on Aug. 20, 1942, at the Sixth Street Gym in Leadville, this photo shows locals, Camp Hale workers and soldiers dancing as a “swing band beats out the latest of Tin Pan Alley,” according to the caption on the back. “Seems Leadville, once a red-hot boomtown, wasn’t dead – just sleeping,” the caption continues. “The town has returned to its former glory because of the influx of hundreds of workers employed at Camp Hale.” 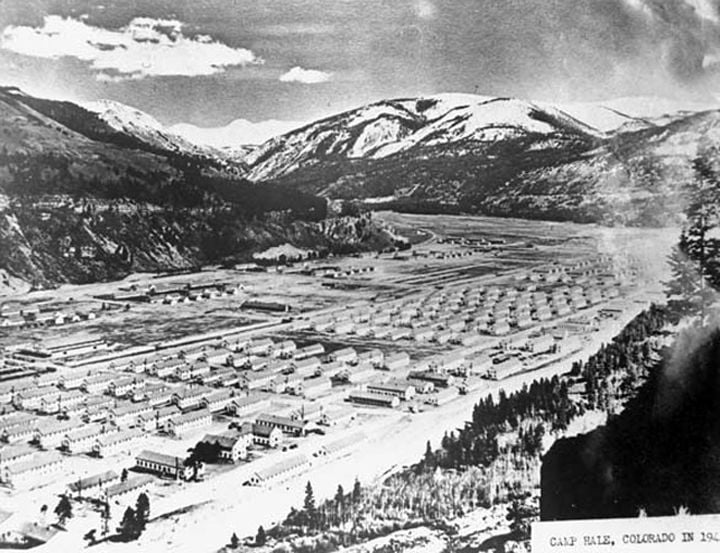 Taken on Aug. 20, 1942, at the Sixth Street Gym in Leadville, this photo shows locals, Camp Hale workers and soldiers dancing as a “swing band beats out the latest of Tin Pan Alley,” according to the caption on the back. “Seems Leadville, once a red-hot boomtown, wasn’t dead – just sleeping,” the caption continues. “The town has returned to its former glory because of the influx of hundreds of workers employed at Camp Hale.”

Even before officially opening, Camp Hale and its thousands of soldiers and civilian workers quickly captured the attention — and the imagination — of the nation. Television and radio newscasters and journalists were quick to swarm to the cantonment, eager to catch the men in action as they trained in alpine and cross-country skiing and honed their skills in cold-weather survival. A November 1942 issue of Life Magazine featured one of the camp’s “Mountain Troopers” on the cover, and was followed just a few months later by an illustration of a soldier clad in the famous white uniform of the 10th on the cover of a March 1943 issue of The Saturday Evening Post. Special broadcasts of popular nationwide radio programs “Army Hour” and “Vox Pop” aired from Camp Hale in January and June 1943, entertaining the soldiers and the country. At the same time, the Associated Press, in conjunction with the surgeon general, issued a dispatch from Washington, D.C. praising the health of the men of Camp Hale, dispelling rumors of numerous deaths and rampant disease at the unique high-altitude facility.

Even Hollywood took note. A Feb. 22, 1943 article appearing in the Carbonate Chronicle announced the arrival of a group of Warner Brothers Studios’ representatives. The producers quickly began making arrangements to begin filming “an ambitious short subject about the activities of the ‘Fighting Mountaineers.’” The featurette, later titled “Mountain Fighters,” chronicled the ambitious training of the soldiers of the 10th, a feat which had never before been attempted in American military history. With a crew of 48 actors and off-screen personnel, “Mountain Fighters” was filmed in a few weeks in the spring and made its world debut Aug. 7, 1943, at the Liberty Bell Theater in Leadville.

The Warner Brothers’ representatives were followed by another Hollywood group in November, this time from Paramount. The crew of producers, directors, camera operators and other behind-the-scenes personnel were visiting Leadville and Camp Hale to take background shots for the feature-length film “I Love a Soldier,” starring Paulette Goddard and Sonny Tufts. The group spent a month gathering their background shots, including exterior shots of four houses on East Ninth Street in Leadville and various buildings and scenic spots at Camp Hale, featuring footage of ski troops in their famous white uniforms. The picture was released Aug. 15, 1944, and had its “western premiere” at the Liberty Bell Theater in Leadville on Sept. 3.

Just as the media endeared the mountain troops of Camp Hale to the American public, the camp’s own newspaper evolved into a professionally printed publication. The new partnership between the reporters of the Camp Hale Ski-Zette and The Herald Democrat was first announced in the April 12, 1943, edition of the Herald. In exchange for printing the weekly, complete with unique mastheads, photographs and columns reporting the movements of each regiment, free and without advertisements, the staff of The Herald Democrat “obtained permission to reprint a number of articles from the Ski-Zette which are deemed of interest to the general public.” From mid-April of that year until the last publication of the Ski-Zette, articles written for and by Army and civilian personnel highlighting life in the camp and the accomplishments of its soldiers were printed in a full-size newspaper courtesy of The Herald Democrat.

Though the troops continued their rigorous training following the official opening of Camp Hale, it wasn’t all work and no play. Within the first months of 1943, three movie theaters opened in the camp. The Service Club hosted regular game nights, live performances and public appearances by celebrities of the time like Patricia Morison, Charlie Peterson, Jinx Falkenburg, Jane Wyman, Richard Himber, Joe Louis and Lowell Thomas.

Notices appeared in The Herald Democrat and Carbonate Chronicle near the end of 1942 requesting young female volunteers from Leadville and surrounding communities to become USO hostesses or dance partners at the regular USO dances for the soldiers of the camp.

In addition to reporting on camp conditions, the Camp Hale Ski-Zette immediately began running notices for new clubs seeking to increase their memberships, including a band and a drama club, which would go on to stage their own original musical, Hale and Hearty, the following February.

Basketball, softball and ski racing teams formed at the same time, going on to win nearly all their matches against opposing clubs from the region. As the soldiers continued to make themselves at home, more recreation facilities opened, stocked with furniture, books, radios, records and other equipment donated by the people of Leadville and other surrounding communities.

Temporary restrictions on travel to Leadville were lifted March 1, 1943, and soldiers and civilian workers began making regular trips to relax — and cause trouble — in Leadville.

The first report of a stolen vehicle, in this instance an Army Jeep, appeared in the Herald Democrat in the first week of September 1942, the first in a long string of misplaced and “borrowed” vehicles from Lake County, Camp Hale, Red Cliff and all surrounding areas. In most cases, after joyriders exhausted their supply of gas, the vehicles were found abandoned by the side of the road anywhere from a few blocks to a few towns away and were returned to their owners. A few others managed to traverse several states before being located, and in one instance, the vehicle, having outlived its usefulness, was set on fire on the side of the road south of Leadville. “Evidently pushed over the bank near the D. & R. G. overpass, the car was burned up completely with the exception of the two rear wheels” by the time authorities arrived on the scene.

Many items also mysteriously disappeared from town. In one case, 27 watches, three diamonds and various other pieces, worth about $2,000 total, were stolen from Parker Jewelry in Leadville. Many of the pieces were later recovered in the possession of Privates Curtis and Sieba from Camp Hale; one had even sent a jewel-encrusted watch home to his father as a souvenir. All of the stolen items were later recovered, and the soldiers in this case were sentenced to 15 years in prison and a dishonorable discharge for their misconduct.

One incident reported in the June 1944 Carbonate Chronicle detailed a stabbing and shooting which took place between a private and a member of the Military Police, or MP, on Harrison Avenue outside of the Paramount Club. After spending the night in the Leadville jail for drunkenness, Private Knute Ranknoe pulled a knife and stabbed MP Private Ed Topping in the back when Topping appeared to rearrest Ranknoe and transport him back to Camp Hale. After being shot, Topping then managed to shoot Ranknoe in the groin. Both men were seriously wounded and transported via ambulance back to the hospital at Camp Hale for treatment. Records of whether they survived their injuries or not could not be found.

During 1943, the Lake County Sheriff’s Office reported just 250 combined civilian arrests for the city of Leadville and the larger county, while 504 soldiers made their way through the county jail during the same period.