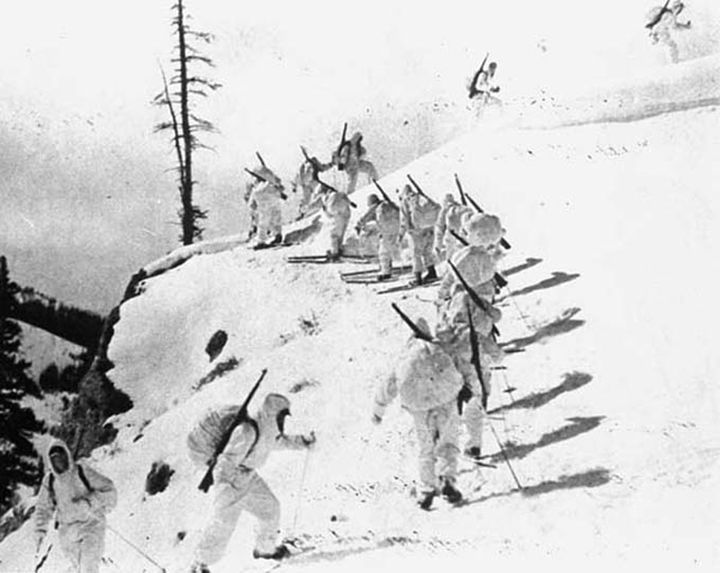 Soldiers of the 10th Mountain Division wearing their famous white uniforms and laden with heavy packs make their way up a steep mountainside on skis. 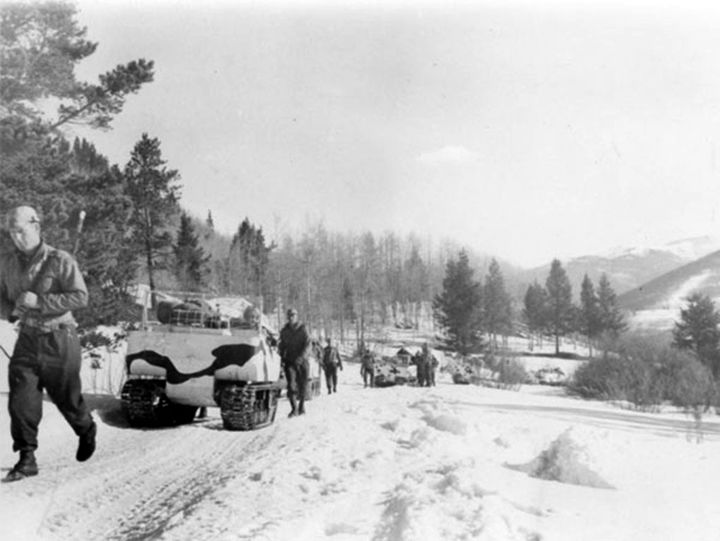 Soldiers trek down Resurrection Road between Camp Hale and Vail Pass with a M29 Weasel. An amphibious vehicle able to quickly traverse muddy and snowy terrain inaccessible to other kinds of transportation, the Weasel was originally developed to carry troops on sabotage missions in wintery Nazi-occupied Norway.

Soldiers of the 10th Mountain Division wearing their famous white uniforms and laden with heavy packs make their way up a steep mountainside on skis.

Soldiers trek down Resurrection Road between Camp Hale and Vail Pass with a M29 Weasel. An amphibious vehicle able to quickly traverse muddy and snowy terrain inaccessible to other kinds of transportation, the Weasel was originally developed to carry troops on sabotage missions in wintery Nazi-occupied Norway.

A handful of soldiers from the 10th Reconnaissance Troop and Mountain Training Group put their training to the test and celebrated the turning of the new year by summitting Mt. Elbert and Mt. Massive in the week between Christmas and New Year’s Eve 1943.

The group consisted of 68 officers and enlisted men, 60 on skis and the rest using snowshoes, who began their ascent of Mt. Elbert early in the morning on Dec. 28. Over the next two days, the soldiers kept up a rapid pace, taking on all manner of winter weather along the Main Range Trail, and made good time in their ascents of both peaks. They spent the evenings of December 28 and 29 in the valleys between peaks, and according to the Jan. 7, 1944, Ski-Zette, “No one seemed to care if it snowed, or noticed that it was cold away from the fires. Everyone was in good condition, and what might have been considered hardships to some people was just duck soup to these mountaineers.”

Upon reaching the summits of Mt. Elbert and Mt. Massive, the soldiers took time to appreciate their surroundings, memorializing the event with pictures and signing the Colorado Mountain Club registers safely hidden atop each peak. In all, “This 32-mile trip, accomplished in severe winter weather, turned out to be a good test of men and equipment, neither of which were found wanting.”

Camp Hale personnel again chose to test their training in late February 1944 by undertaking an ambitious 50-mile trek from Malta, just south of Leadville, to Aspen. “In all, 30 enlisted men and three officers made the trip,” according to the article “Recond, MTG, And Petzoldt Make Rugged 50-Mile Ski Trek to Aspen,” published in the Camp Hale Ski-Zette March 3, “going from Camp Hale to Malta in trucks, and there donning their skis and taking off into the real wilderness.” The trek, billed as a reconnaissance mission, was completed in just four days before returning to camp from Aspen via truck. The rigorous pace set by the veteran outdoorsmen as they skied and scaled the continental divide might have given others pause, but the 30 men participating insisted it was more “a pleasure ‘exertion’ than anything else.”

Just one month later, the entire force of Camp Hale left the cantonment for weeks of extensive field maneuvers, truly putting the fortitude of the entire force to the test. An intense mock-war scenario was devised by Lt. Col. Lucien Bolduc to test the men of the 10th in every feasible manner — within the limits of safety — including live explosives, capturing and interrogating prisoners, and high-stakes medical evacuations in hard-to-reach locations.

“If the mountain training of the 10th Division’s men and the woodsmanship and resourcefulness of which most of them are so proud have built up mutual confidence and esprit de corps to the point where one unit will exert itself to reach a rendezvous, confident that the other units will also have reached the expected place at the proper time, the prime purpose of the maneuver will be achieved and tactical success will be a certainty,” reported the Ski-Zette in announcing the maneuvers.

The exercises culminated in a heavily concentrated up-mountain offensive against a full combat team on a battlefield which spanned 50 square miles, from Sugarloaf Mountain to Red Cliff and Pando to Shrine Pass. The capable men of the 87th Infantry, with supporting artillery, were to act as the enemy against the remainder of the 10th. The two opposing forces spent the next three days “destroying” supplies, cutting communications and sabotaging supply routes.

Thanks to some planted false intelligence, the mock-battle ultimately culminated in a win for the “enemy” combatants of the 87th, but did serve to show the unique capabilities of the entire 10th Infantry Division and the intensive training that suited them perfectly to the equally unique challenges of warfare in the mountains.