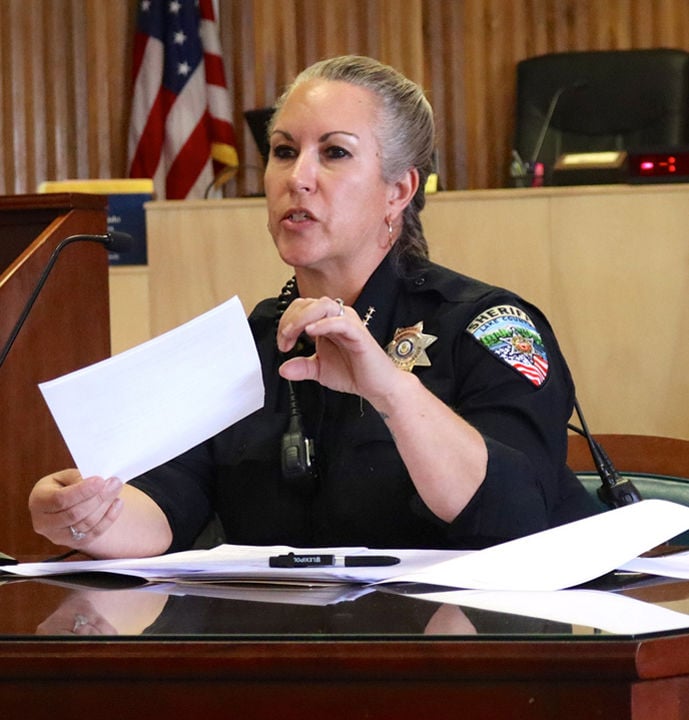 Sheriff Amy Reyes discusses her opposition to the “Red-Flag Law” at a public meeting on Monday. The Board of County Commissioners is considering passing a resolution that would make Lake County a “second-amendment sanctuary.” 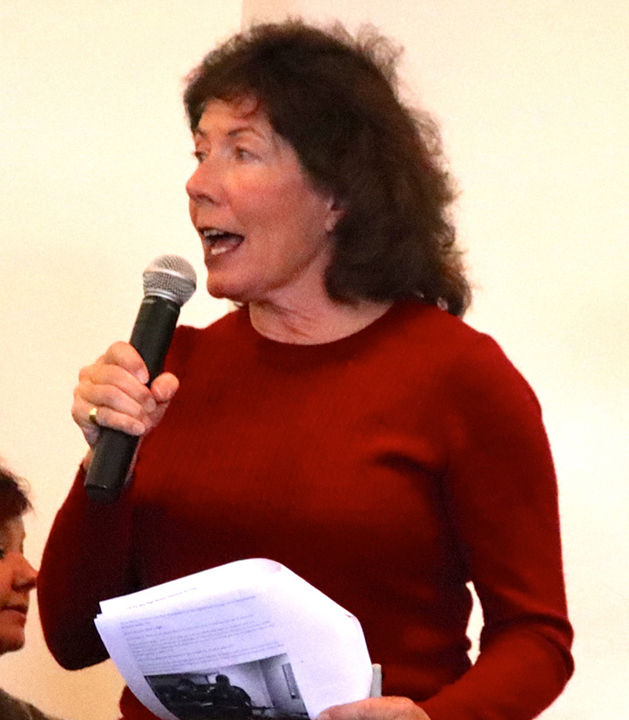 Kelly Sweeney advocates against joining the majority of Colorado counties as a “second-amendment sanctuary.” Sweeney said that House Bill 1177 should be tested in court and amended by the state legislature as needed.

Sheriff Amy Reyes discusses her opposition to the “Red-Flag Law” at a public meeting on Monday. The Board of County Commissioners is considering passing a resolution that would make Lake County a “second-amendment sanctuary.”

Kelly Sweeney advocates against joining the majority of Colorado counties as a “second-amendment sanctuary.” Sweeney said that House Bill 1177 should be tested in court and amended by the state legislature as needed.

The Board of County Commissioners has yet to decide whether Lake County Government will join the majority of Colorado counties as a “second-amendment sanctuary.” Sheriff Amy Reyes supports the idea and opposes House Bill 1177, colloquially known as the “Red-Flag Law.”

If the law is enforced as written, beginning on Jan. 1 a family member, roommate or law-enforcement officer will be able to petition a judge to temporarily remove a person’s firearms.

If the petitioner establishes clear and convincing evidence that a person poses a threat at a preliminary hearing, a judge could grant a temporary extreme-risk protection order (ERPO) that would authorize the seizure of that person’s firearms for up to 14 days. The gun owner does not have to be present at the preliminary hearing. If the ERPO is found warranted at a second hearing, the respondent could loose access to firearms for up to 364 days.

About 20 residents spoke in favor and opposition of the law at a public meeting on Monday afternoon. Those in opposition asked the BOCC to pass a resolution challenging the legislation and prohibiting the use of county funds, resources and employees in enforcing the law.

Reyes, as well as a variety of community members, said the law infringes on the constitutional right to due process and the Fourth Amendment, which protects against unreasonable searches and seizures.

Reyes also asserted that the law is unnecessary, as law enforcement already has the ability to place individuals on an involuntarily 72-hour mental health hold where they are evaluated and treated by licensed mental health professionals.

“It takes out that level of expertise and opens the door to people making accusations because they are angry with someone else,” Reyes said of House Bill 1177.

Constituents echoed Reyes’ thoughts, noting that the law could easily be abused by an individual hoping to take revenge on a gun owner.

“How do I prove I’m not crazy?” Jonathan Espinoza asked the BOCC regarding challenging an ERPO in court. The law stipulates that the state will provide court-appointed counsel for people whose guns are seized.

Reyes also noted that carrying out ERPOs could be risky for law enforcement officers. Additionally, the law does not stipulate what officers should do if someone refuses to hand over their firearms.

“There’s no way to stop a bad guy with a gun,” Robert Gonzales said. “This is all about disarming America.”

Locals who support the law said that potentially infringing on gun rights is a lesser evil than gun violence.

“This bill provides one more tool for those of us in the field to use in a good way,” former social worker Gabrielle Burkham said.

Others said that Lake County should let the law be tested in court and amended by the legislature before making a decision to not enforce it.

“This is state law and we elected a sheriff to enforce state law,” Alice Pugh asserted. “This would be a dangerous precedent to set ... that the sheriff can change state laws.”

“We have a legislature that created a bill,” Kelly Sweeney said. “It may be an imperfect bill ... but let’s follow process and avoid lawsuits against the county by letting it play out through the courts.”

The BOCC expressed concern over potential liability issues for the county if it were to pass the resolution at hand. The board had not heard back from its legal team on liability issues at the time of the meeting.

“We need to take in all sides of the coin and reduce risk for the county,” Commissioner Kayla Marcella told attendees. “We need to be sure to not jump the gun.”

Commissioner Sarah Mudge also stated that she wanted to speak to Lake County’s state representatives about the possibility of amending the law in 2020 before making a decision. Commissioner Mark Glenn had no comment.

The BOCC plans to draft a new second-amendment sanctuary resolution over the next week. The board will discuss the resolution again on Monday at 1 p.m. at the Lake County Courthouse.