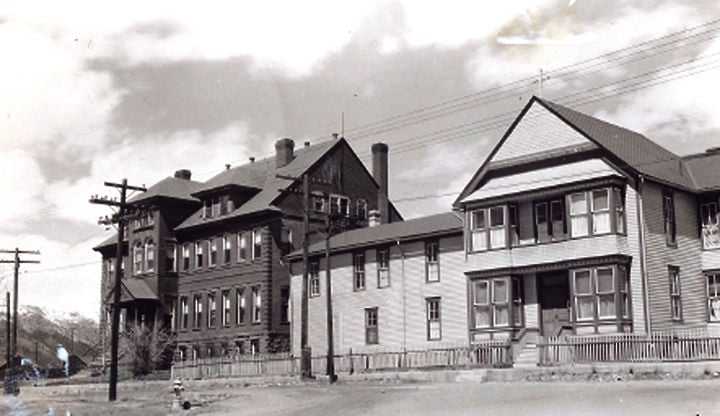 The original 1879 St. Vincent’s Hospital is the building to the right, with the 1901 hospital to the left. The 1901 building is currently condominiums. 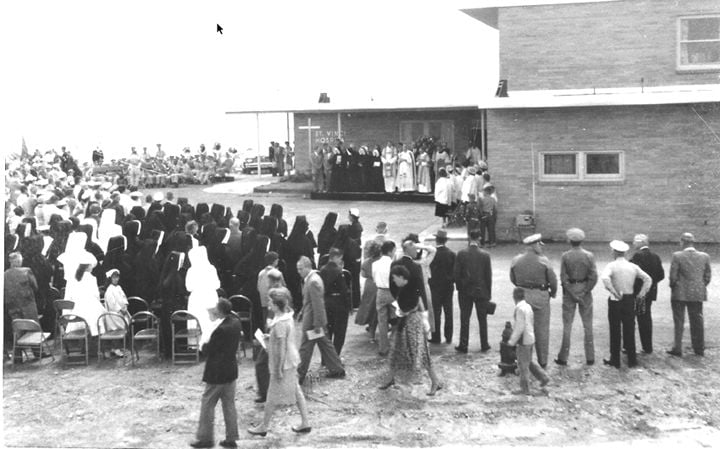 The grounds are packed when the new St. Vincent Hospital is dedicated in June 1958.

The original 1879 St. Vincent’s Hospital is the building to the right, with the 1901 hospital to the left. The 1901 building is currently condominiums.

The grounds are packed when the new St. Vincent Hospital is dedicated in June 1958.

“ ... Toward the end of December 1878, there came to Leadville over the rough roads and through the storm, six noble women.

They had heard that up here on the wild mountain-top was sickness, sorrow and despair, and they came to comfort.

Up to that date it was the custom for men to crowd around a coach known to contain females on its arrival and not always were the remarks there heard belonging to gentlemen. But when the rough crowd saw the females here alluded to, they fell back in respectful silence, and many a rough, long-haired, coarsely appareled miner uncovered his head. The six were Sisters of Charity, come on an errand of mercy.”

This is how the Leadville Daily Chronicle described the arrival of the Sisters of Charity who started the first St. Vincent’s Hospital.

When the Sisters first reached Leadville, the Daily Chronicle of Feb. 1, 1879, remarked that they became the guests of Mrs. Ed Kilduff of the St. Nicholas Hotel in the city’s infamous State Street. It must have been an eye-opening experience.

The Sisters went about their mission of tending sick people wherever they could find them, but quickly the thought of a hospital arose.

H.A.W. Tabor began the effort with a $500 subscription and within a month, enough funds were raised to build the hospital.

Then the Sisters needed a lot upon which to build.

In an editorial in the March 31, 1879 Chronicle, the Sisters gave thanks to W. H. Stevens, who had told the Sisters to select a lot or lots from those he owned on which to erect the hospital. He charged nothing for the lots or for the expense of transferring them.

Sisters M. Crescentia, Francis Xavier and Mary Bernard selected the location and construction was begun immediately under the direction of F. Colahan.

In March of 1879 the three Sisters of Charity went to view the progress on St. Vincent’s hospital. They found the building with a roof, but doors and windows were not in place yet.

As they prepared to leave the building, the unexpected happened. Their first patient was brought in and laid on a pile of shavings at their feet.

Although the Sisters were not prepared to receive patients yet, they decided to stay at the hospital with their patient. That was March 13, 1879, and St. Vincent’s was open for business.

On the second day, workmen arrived to put in the windows and install partitions of canvas and calico separating the rooms into wards and private apartments.

As soon as word was out that the hospital was open, patients started arriving in numbers, including 27 measles patients that arrived at one time.

When Sunday came, Sister Mary Bernard came down with a severe headache and had to be added to the list of the very ill.

The other two sisters were left with more than 30 patients, all confined to their beds and needing hourly attention day and night. Somehow they did it.

The Sisters continued to ask for more help, but none was sent.

Then one day a man arrived at their door saying he had two more patients for them out in the wagon, two ladies.

“Why did you bring them here?” asked Sister Mary Bernard.

“You know there is not another bed in this house for a man, much less two ladies.

The man went to the wagon and brought in Mother Josephine and Sister Martha, whose help was greatly welcome.

On June 2, a reporter for Leadville’s Chronicle arrived at the hospital to interview the sisters.

The sister took down her book and informed him that from March 13 until June 2, there had been 181 patients admitted, of whom 14 died. Currently, there were 50 patients in the hospital.

In speaking of the 14 who had died, the Sister remarked that it seemed like a good many to lose but, as the physician would testify, they were scarcely alive when they arrived.

“Here in this anxious, busy, exciting mining country, men are loath to lay down as long as there is a breath of life left in their bodies,” the Sister said.

The reporter then asked the Sister if they would take him in, if he should fall ill with pneumonia.

She indicated that they would.

“But I am not a member of the Catholic church,” he countered.

“That makes no difference. We never inquire about a patient’s religion. So long as there is room, we take all who come whatever may be their color, creed or nationality. Otherwise it would not be a charity,” she responded.

Although St. Vincent’s Hospital was completed in 1879, soon it became apparent that more room was needed. In June, 1879, the contract was let for work on a new building addition, which would cost $4,000. This contract included having the new addition lathed, plastered and painted, with a new porch across the front of the old building and across the back of the new. A chapel and laundry were included. The Sisters went around town for subscriptions to pay for the building.

Just as the building was completed, it narrowly escaped destruction by forest fires which nearly surrounded it.

Once the building was finished, the patients were transferred into it while the old building was lathed, plastered, painted and partitioned. One strong room was provided for the use of insane patients.

Soon after the building addition was completed, the Sisters became victim, as did other residents in town, of lot-jumpers.

Father Robinson and the sisters had selected their lots at the southeast corner of E. Tenth and Hemlock streets because they were far from the crowded section of town. But in the spring of 1880, the Denver and Rio Grande Railroad purchased lots a few blocks north of the hospital. When it was learned that the railroad was going to build its depot on those lots, the Sisters began getting letters telling them to move their hospital to another location, something they had no intention of doing.

On April 10, they received a particularly threatening letter saying that the hospital would be fired upon at 10 p.m.

The sisters contacted Father Robinson, who went to his parishioners for aid. A group of men came to the hospital that night to stand guard. At about 11 p.m., two men came to the hospital and began tearing down the fence. One of the guards shouted at them to stop, but they did not. Someone fired a pistol and the two ran off. The protectors of the hospital ran after them, another shot was fired, and one of the two men fell.

By the turn of the century, St. Vincent’s Hospital had outgrown itself. The Herald Democrat of May 20, 1900, reported:

“One of the most expensive and important structures to be erected is the new St. Vincent’s Hospital. H. C. Dimick has drawn the plans for the new hospital which will grace the grounds adjoining the present structure, and they are being examined by the various contractors .... It will be of brick and cost more than $30,000. There will be a basement, two stories and an attic. When completed, it will be one of the finest hospitals in the West.”

All concerned with the building were proud to say that it had been designed and erected by Leadville men. It accommodated 75 patients. The letter “M” was placed over the entrance, engraved in gold, by the miners as a token of their appreciation. The new hospital opened in 1901.

It also contained the first elevator in Leadville and hot-water heat.

About 75 years after St. Vincent’s first opened, the hospital was condemned as a fire hazard, and plans were made for the construction of a new hospital. In its first 75 years, St. Vincent had served 33,096 patients. It had its first maternity case in 1905 and had delivered 3,365 babies by December 1953.

On Sept. 29, 1955, ground was broken for the new 35-bed St. Vincent Hospital on Xavier Heights, which was dedicated on June 22, 1958. Archbishop Urban J. Vehr said a pontifical high mass, blessing the building and each room followed by an outdoor benediction.

Two doctors served as the driving force behind the new hospital, Dr. Vincent E. Kelly and Dr. John Kehoe. The building was completed with citizen donations, aid from the federal government and the Ford Foundation, completely free of debt.

The Sisters of Charity took title to the new building, and operated it for 12 years. Then problems with staffing caused them to sell some of their smaller hospitals, including St. Vincent’s. The hospital was sold to the community of Leadville in 1972.

At the time there was a stipulation that the name had to change. The city agreed that it would become St. Vincent Hospital rather than St. Vincent’s.

In May 2003, St. Vincent received the good news that it was designated a critical-access hospital, a designation given to some small, rural community hospitals whose existence is deemed crucial to maintaining access to health care for surrounding residents. The designation changed the way Medicare reimburses St. Vincent, and was expected to bring in more than $500,000 in additional reimbursed medical expenses each year.

The hospital continued to operate under a CEO until 2005 when the hospital board signed a five-year contract with Quorum Health Resources, a hospital management company. Under the terms of this contract, the hospital CEO and CFO were to be employees of Quorum, not St. Vincent. In 2014, facing significant operating losses and dwindling patients, the hospital board of directors attempted increase the hospital mill levy from 5.6 mills to 16.4 mills. The levy increase did not pass and the board announced the hospital would close on March 31, 2015.

The hospital did not close after all, although the extended-care unit was cast off. The hospital board then entered into a contract with Centura, which operates a hospital in Summit County. That relationship was short-lived, and today the hospital is back to operating independently with Gary Campbell as CEO.

As the hospital celebrates its 140th anniversary this year, another new hospital building is under construction on property adjacent to the current hospital

Information for this article, originally written to commemorate the hospital’s 125th anniversary, came from the Carbonate Chronicle, Herald Democrat, St. Vincent Hospital and materials of the Sisters of Charity of Leavenworth, Kan.