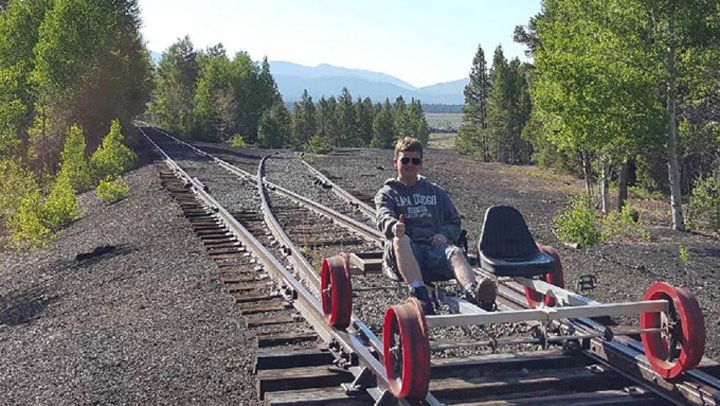 Colorado Mountain College Breckenridge student and Leadville resident Sean Fay pedals one of his RailRiders bikes. The bikes are used in France and Portugal, and some parts of the U.S. 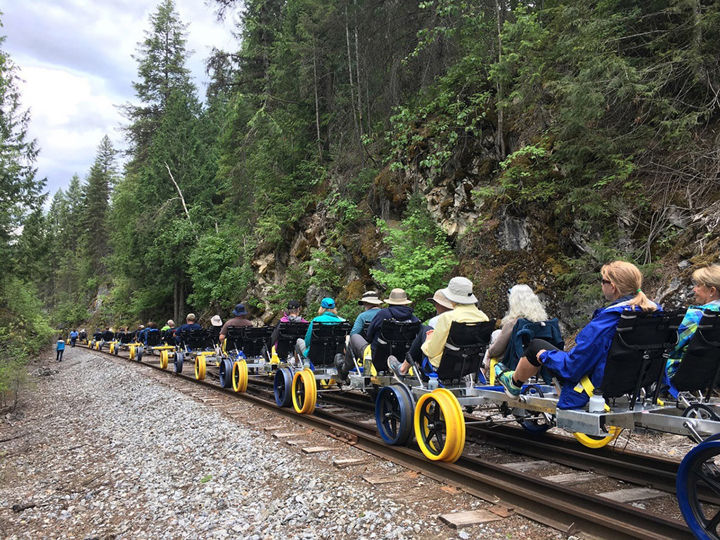 A group of RailRiders enthusiasts pedals down a section of railroad track in Oregon. Colorado Mountain College Breckenridge business student, Leadville resident and RailRiders owner Sean Fay is working to expand rail riding in the U.S.

Colorado Mountain College Breckenridge student and Leadville resident Sean Fay pedals one of his RailRiders bikes. The bikes are used in France and Portugal, and some parts of the U.S.

A group of RailRiders enthusiasts pedals down a section of railroad track in Oregon. Colorado Mountain College Breckenridge business student, Leadville resident and RailRiders owner Sean Fay is working to expand rail riding in the U.S.

We’ve all seen those 19th century sepia-toned photos of railroad workers pumping a seesaw contraption down a section of railroad tracks. Called handcars, these little hand-powered vehicles propelled railroad workers where they needed to go to check tracks and repair rails.

Sean Fay of Leadville is a railroad fanatic and go-cart enthusiast. Trains and those hand-powered carts had a lifelong effect on him.

“From the time I was 4 years old, I can remember playing with my grandpa’s model trains,” said Fay.

Fourteen years ago, Fay’s fascination with trains and tracks led him to Ron Forster, a New Hampshire cyclist who, in 1980, devised a bicycle attached to an outrigger contraption that could be ridden on railroad tracks. Numerous improvements later, the bike became a four-wheeled rail vehicle propelled, not by hand cranking, but by foot pedaling. Forster sold a bunch of the carts and created the Rail Riders Association to promote the hobby.

Fay stayed in touch with Forster, and when he began hearing that the latter might want to sell his unique RailRiders company, Fay took notice. This was right about the time he was taking business classes from Dr. Robert Cartelli at Colorado Mountain College. It couldn’t have happened at a better time.

“Everything I learned in that entrepreneurship class with Robert Cartelli was a godsend,” Fay said. “It was so weird. It applied to everything I needed to know about buying and operating that business. I applied it all right away.”

For the past several years, Fay has been attending Colorado Mountain College Breckenridge while working full time at Beaver Run Resort and Conference Center. He’ began as a security guard and is now an assistant maintenance manager.

He likes the resort business, and is working toward an associate degree in resort management as well as a Bachelor of Science in business administration at CMC.

“That’s my fallback,” he said, grinning.

Fay bought the company from Forster a few years ago, inheriting a clientele of avid yet highly selective people interested in riding abandoned train tracks with human-powered vehicles. Fay concentrates on creating specialized railroad wheels for the bikes. He also will build full four-wheeled bikes for customers.

“I call them the coolest bikes you’ve never heard of,” said Fay.

In Europe, RailRiders bikes can be seen in France and Portugal, where unused tracks aren’t ripped up to make way for walking and bicycling paths, which is often the norm in the U.S. Instead, dedicated railroad tracks are set aside specifically for people who want to pedal down tracks using these specialized vehicles.

Fay said that in the United States, riding the rails is not as common as in other parts of the world. However, track sections dedicated to rail riders are now established in New Hampshire, Maine, Washington, Nevada, South Dakota, upstate New York, Oregon and West Virginia.

Fay said he is talking with railroad track owners in South Fork, Creede, Glenwood Springs and other locations regarding dedicating several track sections to this new mode of “train” travel. “We’ll likely see them in Colorado,” he said.

Even Hollywood is in on the trend. The TV series “Teen Wolf” used one of RailRiders’ platforms for filming several of its episodes.

Safety is paramount in the use of rail rider bikes on railroad tracks. Fay stresses the importance of asking for permission to ride on any railroad line, since tracks are private property no matter how unused they look. And publicly owned tracks, whether in use or abandoned, are off limits.

Editor’s note: Telluride’s Chuck Kroger hand-crafted mountain-bike-based three-wheeled rail vehicles in the 80s and 90s for local use — and that’s another story.