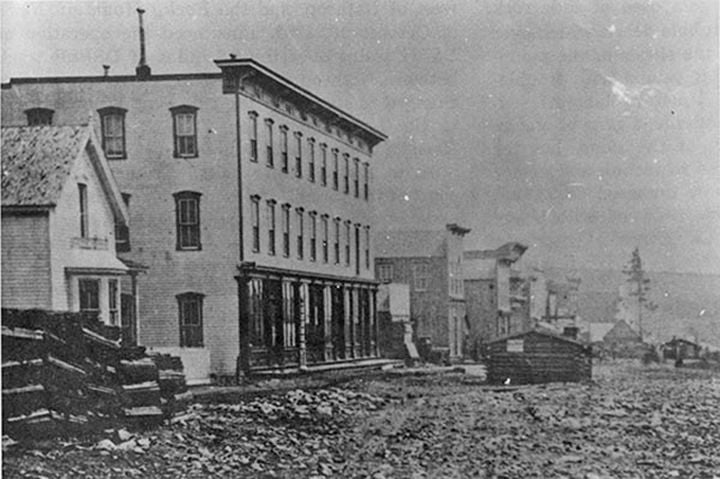 The recently completed Clarendon Hotel sits on Harrison Avenue in 1879. The Leadville home of Horace and Augusta Tabor, which was later moved to its present location, sits to the left. The Clarendon was used as a makeshift city hospital during the Spanish influenza. 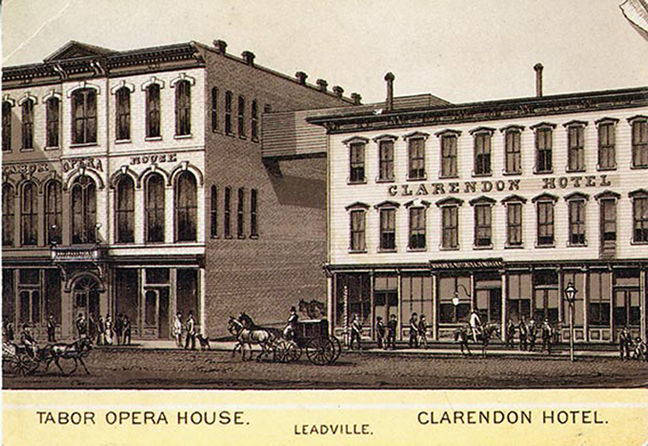 Though the Clarendon Hotel is no longer on Harrison Avenue, the building was built by William H. Bush in 1879. The Clarendon was later connected to the Tabor Opera House via a third-floor skywalk across St. Louis Avenue, between East Third and Fourth Streets. In 1880, it housed Horace Tabor’s then-mistress and future wife, Elizabeth “Baby Doe” Bonduel McCourt, before his divorce from his first wife, Augusta Pierce Tabor.

The recently completed Clarendon Hotel sits on Harrison Avenue in 1879. The Leadville home of Horace and Augusta Tabor, which was later moved to its present location, sits to the left. The Clarendon was used as a makeshift city hospital during the Spanish influenza.

Though the Clarendon Hotel is no longer on Harrison Avenue, the building was built by William H. Bush in 1879. The Clarendon was later connected to the Tabor Opera House via a third-floor skywalk across St. Louis Avenue, between East Third and Fourth Streets. In 1880, it housed Horace Tabor’s then-mistress and future wife, Elizabeth “Baby Doe” Bonduel McCourt, before his divorce from his first wife, Augusta Pierce Tabor.

The Spanish influenza, the deadliest pandemic of the 20th century, officially came to Leadville September 28, 1918. What started with one young man complaining of a high fever, severe cough and fatigue after visiting a friend stationed at Camp Lewis in Washington, began the rapid and deadly spread of influenza throughout Lake County.

Normal life soon came to a screeching halt for most Leadvillians. Schools and businesses closed. Stores that remained open risked heavy fines if too many patrons were found in their establishments at one time. All “non-essential” social functions, and even church gatherings and funerals, were cancelled by city health officials in an effort to check the spread of the disease.

Built in 1879 by William H. Bush, a prominent figure in early Leadville, the Clarendon changed hands a number of times over the intervening four decades. On August 12, 1918, the 100-room hotel was sold by William C. Merrell, Jr., to John Sandburg, both of Denver, for $6,000. The business was managed locally by the Petrini family.

Bart Petrini and his wife Clara, both Italian-Americans, leased the Clarendon, running it as a rooming house and hotel. Prior to the pandemic, the Clarendon hosted a number of immigrants from many different countries.

Just one month after the Spanish flu appeared in the city, county health officers announced that the Clarendon building had been procured as an emergency hospital. Both St. Vincent’s and St. Luke’s Hospitals were filled to capacity, and “the Clarendon building, formerly used as a hotel and rooming house, will be capable of holding scores of cases,” reported the October 26, 1918 edition of the Herald Democrat. A team of firemen, aided by twenty people hired by the city, immediately began sanitizing the facility, along with all its beds and other furniture, to prepare for the arrival of patients.

The new hospital was put under the charge of Miss Mary Craig. It was staffed by four traveling nurses from Denver and Greeley, alongside the proprietors of the Clarendon, and volunteers from the community, many of them residents of Leadville’s red light district. Any new victims identified who were unable to provide their own nursing care during their convalescence were transported to the city hospital, where nursing care, medicine and linens were provided at the city’s expense. By October 31, the Clarendon alone reported 51 cases and two deaths from within its walls.

During the property’s time as an emergency hospital, volunteer healthcare workers, like Louis Springetti, another Italian-born immigrant, along with his wife Lizzie, managers of the Silver Bell Resort at 222 Harrison Avenue, made the Clarendon’s new guests as comfortable as possible. They spent weeks seeing to their needs, providing food, linens, and any diversions they were able to offer to the new residents. They helped to the best of their ability, according to Betty Parks of Boulder, granddaughter of the Springettis. The flu was a disaster for the proprietors of the Clarendon and the Silver Bell Resort. “Whole families died in those rooms,” according to Parks. “They lost a lot of friends.”

The emergency hospital stopped admitting new patients at the beginning of January 1919, after the number of new cases of influenza decreased drastically. It then reopened briefly in February of that year as Leadville saw a brief second wave of infections, but was closed permanently that March.

Following the pandemic, as Leadville and the rest of the world attempted to regain some semblance of normalcy, business never really picked back up for the Clarendon, the Silver Bell resort, and a number of other former Leadville institutions. Bart and Clara Petrini moved on to Glenwood Springs not long after. The Springettis stayed in Leadville, but saw a drastic decline in business in the months after the pandemic. They later sold their resort for just $100, according to Parks. Louis Springetti would pick up odd jobs all over Lake County, including mining and, eventually, working as a Hudson La Salle dealer.

Worldwide, anywhere from 20 to 50 million people succumbed to the disease, though some estimates place that number closer to 100 million. Locally, 223 people of all ages died as a result of the pandemic between September 28 and December 30, 1918. Leadville was one of the harder hit cities in Colorado, but thanks to the quick action of doctors, nurses and city health officials, and the determination and perseverance of the community, the epidemic was relatively short-lived in Lake County.

“There’s only one redeeming feature about being sick in Leadville,” reads an interview with a recovered victim of the Spanish flu printed in the December 2, 1918 edition of the Carbonate Chronicle. “That is, your friends, whether neighbors or not—call them the people generally—are Johnny-on-the-spot with first aid in the way of hot broth, fruits, cooked stuff to eat, errand-runners and what-not. I take my hat off to them every time.”