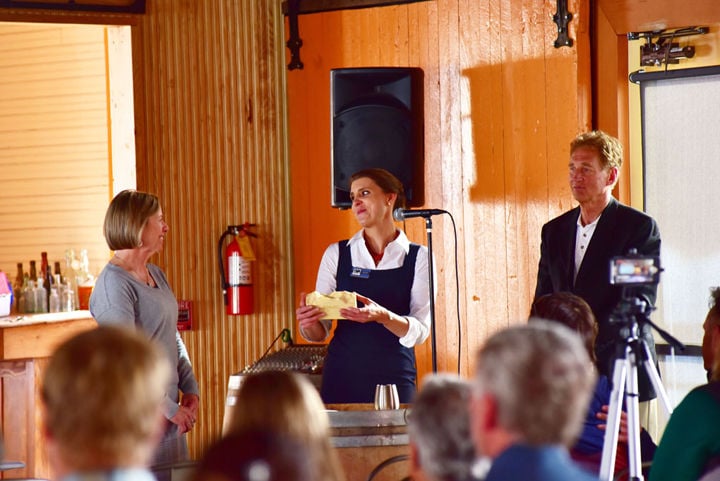 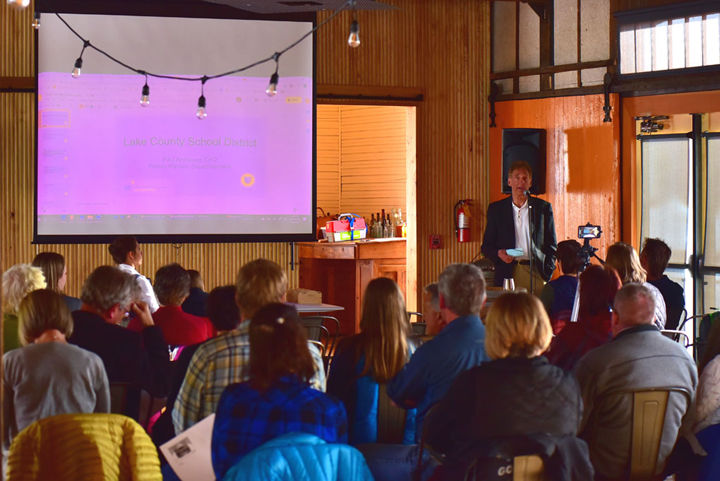 Greg Labbe introduces the presenters to attendees at Wednesday’s State of the Community address hosted at Freight.

Greg Labbe introduces the presenters to attendees at Wednesday’s State of the Community address hosted at Freight.

Community members and representatives from a variety of local organizations and governmental departments gathered Wednesday for the annual State of the Community address.

For the past three years, the Lake County Community Fund had organized the event, though this year they were unable to. The event was co-sponsored by the City of Leadville and the Herald Democrat.

Mayor Greg Labbe opened the event by remembering past years’ addresses and expressed hope that the annual event will continue for many years to come.

Sarah Dallas, administrative services manager for the city, and Labbe began the event with an awards ceremony, presenting community members with the newly-established Tabor Award to honor their work and commitment to Leadville, as a community.

Representatives from eight organizations followed with presentations detailing the efforts of during the past year, the current status of their work, and their goals moving forward.

Lake County School District began the presentation portion of the event. Wendy Wyman detailed the progress being made toward the new elementary school, with the goal of breaking ground in May and opening in fall 2021.

Rachel Pokrandt, vice president and campus dean of Colorado Mountain College, followed the school district’s presentation with information about the recent passage of ballot measures in Poncha Springs and Salida to join the CMC district. Skip Lee, dean of student affairs, presented figures showing steady increases in retention and completion of programs over the last three academic years and highlighted improvements to the dining and residence halls.

St. Vincent Hospital CEO Gary Campbell shared updates on the progress of construction for the new hospital building and the appointment of Whittney Smythe-Smith as the newest board member pending an election for the seat in May.

The Board of County Commissioners, on behalf of Lake County Government, next described the different operations that Lake County government carries out and the taxes, levies, and revenue sources that fund them. Commissioner Kayla Marcella reminded attendees of the coming census and encouraged participation in order to increase the revenue Lake County can access based on population size.

Sarah Dallas, administrative services manager for the City of Leadville, detailed the operations of city government and addressed multiple construction projects impacting Leadville this year, including paving efforts by the state along U.S. Highway 24. Dallas also discussed the potential for the city to transition from a mayoral governmental structure to one with a city manager instead.

Parkville Water District General Manager Greg Teter described the extensive upgrades to the district’s water treatment plant, including replacement water filters and a new emergency backup generator. In 2019, this investment totaled nearly $2 million, utilizing a combination of grant and state funding. Moving forward, the water district aims to bolster the aging infrastructure that it relies on to deliver water throughout the city.

Jane Gowing, speaking for the Leadville Sanitation District, described the efforts being undertaken by the district to meet Colorado Department of Public Health and Environment standards for heavy metals in treated water which they are currently unable to meet. The presence of mercury, arsenic, and other heavy metals are above acceptable levels, and the sanitation district is required to reduce levels to come into compliance with the CDPHE permit. The Sanitation District is required to hold a public hearing about the permit in the coming months.

The Lake County Community Fund rounded out the event with their presentation. Heading into their fourth year of grant programming, the Fund cited the Copper Mountain grant, a $200,000 grant spread over four years, as their biggest success to date. The “We Love Leadville” signage initiative, which is responsible for the new signage at both ends of town, was cited as another successful effort.

After a summary of the evening’s reports, Labbe thanked participants and attendees and closed the event.