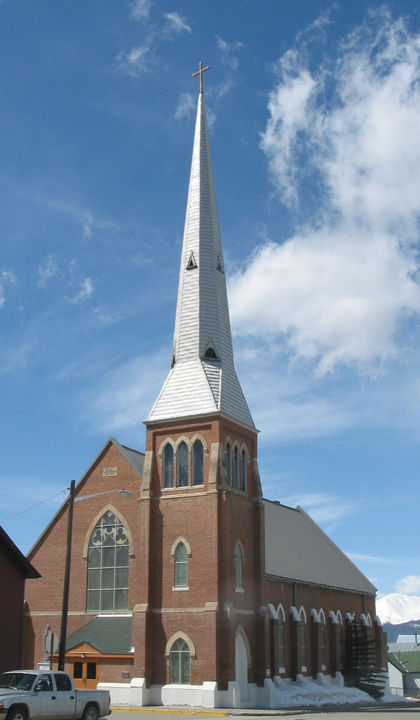 Annunciation Church is the site of the wedding of Margaret Tobin and J.J.Brown. She is better known to some as “the Unsinkable Molly Brown.” 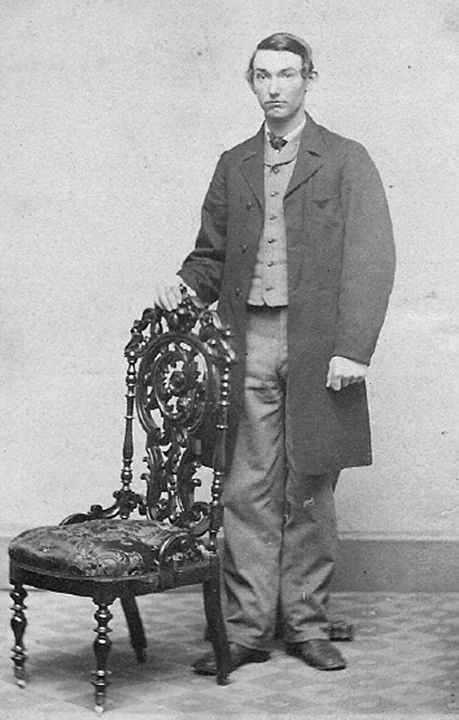 Annunciation Church is the site of the wedding of Margaret Tobin and J.J.Brown. She is better known to some as “the Unsinkable Molly Brown.”

In almost every photo of the city of Leadville taken from 1880 on it’s possible to orient oneself by finding the spire of Annunciation Catholic Church.

This year, Annunciation is 140 years old.

The Leadville Herald in 1880 related that Father Henry Robinson was sent to Leadville in 1879 from Denver and was one of the first clergymen in the carbonate camp.

Robinson, initially based in Fairplay, served a huge district, but as Leadville began to boom, Robinson was assigned here permanently.

Much of the early history of Annunciation is contained in the brochure, “100 years of Faith,” which was published at the time of the church’s 100th anniversary. It was under Robinson’s direction that the building of Annunciaton Church was begun in 1879 and completed in 1881.

The church marks Jan. 1, 1880, as its anniversary date because that is the day the first mass was celebrated at the building. The church came first; the steeple was built later, and the huge bell, weighing 3636 pounds and named “St. Mary,” was not installed until 1885.

The church and rectory cost $40,000 to build. Robinson was the fundraiser, visiting all the mines to obtain contributions. It is said that most Catholic miners contributed a day’s wages ($2 to $3 for a 10-hour shift) to the building fund.

Fairs and a great ball were held to help raise money before the church was dedicated. The Herald described the Catholic Fair, held at the end of 1879, as lasting several days. Initially the fair was kind of chilly as the building was not framed in, the newspaper reported. But construction proceeded quickly.

Entertainment was varied.One night, according to the Herald, “Professor G.A. Godat, who has recently established a dance academy, is director of choreography.” Another night a silver bugle was awarded in a competition between the hose companies – Bush, Tabor and Harrison.

Robinson was the only resident pastor at Annunciation for ten years. In 1889, he was appointed vicar general of the Denver Diocese and left Leadville. At that time, Annunciation financially stable and had $1,000 in the bank.

The history of the church notes that Annunciation was heated for many years by a large furnace in the back of the church which may account for the tendency of parishioners to sit in the back.

During his tenure in Leadville, Robinson was also instrumental in getting the original St. Vincent’s Hospital built as well as St. Mary’s School.

On May 29, 1902, Annunciation was consecrated in a solemn ceremony. Two years earlier, the church had burned its mortgage and became totally debt free, one of the requirements for consecration. It was believed that only two churches in the state were consecrated at that time.

During the ceremony, 12 metal crosses were placed on the church’s inside walls, a symbol of the consecration that cannot be removed. At this time, Reverend J. J. Gibbons was pastor of the church, serving from 1898 to 1911.

St. Joseph Church of Leadville was formally dedicated on Dec. 17, 1899, and both churches shared the same boundaries. St. Joseph, however, was established as a national church, as Neil Reynolds told the Herald in 2005. This meant the church was aligned with an ethnic group. The masses at both churches were in Latin, but the sermons at Annunciation were in English; at St. Joseph, they were in Slovenian.

And although the churches shared the same boundaries, the unofficial boundary was Harrison Avenue, Reynolds said, admitting to some rivalry between the two.

Rev. William O’Malley took over as pastor at Annunciation in 1911 and oversaw a renovation of the church in 1916. This included installing a new cross on the steeple, facing directly east and west. The colored glass windows were then replaced with stained glass, through contributions from various families.

Rev. Henry B. Stern, who served as pastor from 1923 to 1928, was the only priest to die while serving the parish. He was 39 when he died from pneumonia.

The pastor with the longest tenure of service was Rev. Edward E. Horgan, a native of Ireland, who served from 1928 to 1956. His early years were during the Depression, and Horgan became known for his appeals for donations as contributions declined. As the economy improved, so did the financial situation at the church, and Horgan was responsible for paying off accumulated debts and establishing savings.

It was during Horgan’s tenure that Leadville was once again allowed to hold Midnight Mass at Christmas.

Apparently during the early years of the church, several drunken men burst into the church during Christmas Midnight Mass, causing a disturbance. The members of the parish ejected them, but not before some blood was shed. For a number of years the bishops would not allow a Midnight Mass at Annunciation, but Horgan managed to get it reinstated.

Horgan celebrated his 25th anniversary as pastor of Annunciation in 1953. Three years later, due to health problems, he was transferred to Denver.

A major renovation of church facilities took place during Rev. James B. Hamblin’s tenure, which stretched from 1956 to 1966, including building a new convent; nuns had previously been housed in the building which had been the first St.Vincent’s Hospital.

This is when new aluminum shingles were installed on the church spire and electronic chimes were installed, for fear the vibrations from ringing the huge bell would hurt the structural integrity of the church. The church bricks were sandblasted and returned to their original condition.

In summer 1960, Hamblin presided over the 100th anniversary of the first mass said in California Gulch, which had taken place in a blacksmith shop. Hamlin was pastor during the second Vatican Council when many liturgical changes were implemented, including saying the Mass in English. He left when the altitude became too much for him

Rev. Regis McGuire next served from 1966 to 1973, the only Leadville native to become Annunciation’s pastor.

Not only was he educated at St. Mary’s school and Leadville High School, but McGuire worked summers at the Arkansas Valley Smelter and at Climax.

He said his first Mass at Annunciation in 1946.

McGuire helped establish the Memorial Day Field Mass said at St. Joseph Cemetery each year to this day. After being transferred to a parish in Loveland, he returned for the Mass each year for a number of years.

Many of Leadville’s pastors had served previously as assistant pastors here. One was Rev. Neil Hewett, who had worked for McGuire.

He was named pastor in 1973, serving when the church celebrated its centennial in 1979 with activities spread out for more than a year. As the church celebrated 100 years, the economy of Leadville was booming thanks to Climax. But changes were afoot. In 1973, St. Mary’s had closed its doors to regular classes and reopened with the combined Confraternity of Christian Doctrine classes of St. Joseph and Annunciation. By 1987, the facility closed and was sold to the Eagles. There were no more Catholic nuns in town.

The Catholic Community of Leadville was established around 1992, combining the congregations of St. Joseph and Annunciation when there was just one priest left to serve all of Leadville. Later the name was changed to Holy Family Parish, encompassing the two churches.

Annunciation Church celebrated the 125th anniversary of the first Mass said at the church on Jan. 1, 2005. Mass was followed by a breakfast in the Parish Hall consisting of breakfast burritos, potica and Irish soda bread to honor the four major ethnic groups that have comprised the church’s membership over the years.

The Herald Democrat in Leadville will turn 140 years old on Oct. 21. It will be celebrating this event with other entities also turning 140. This is the first in a series of articles profiling those entities.