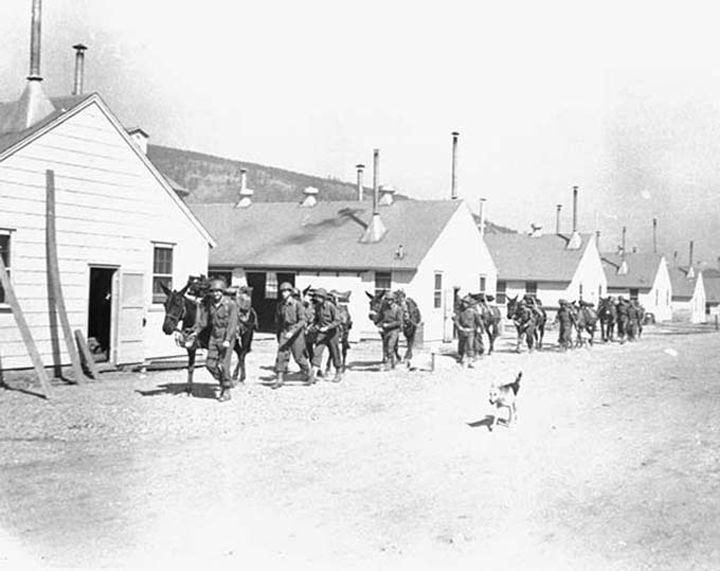 Soldiers lead a line of mules down a barracks-lined Camp Hale street while a dog trots alongside. The men of the 10th Mountain Division often used burros, horses, mules and teams of sled dogs to transport manpower and supplies to areas too remote for Jeeps and other vehicles to reach. 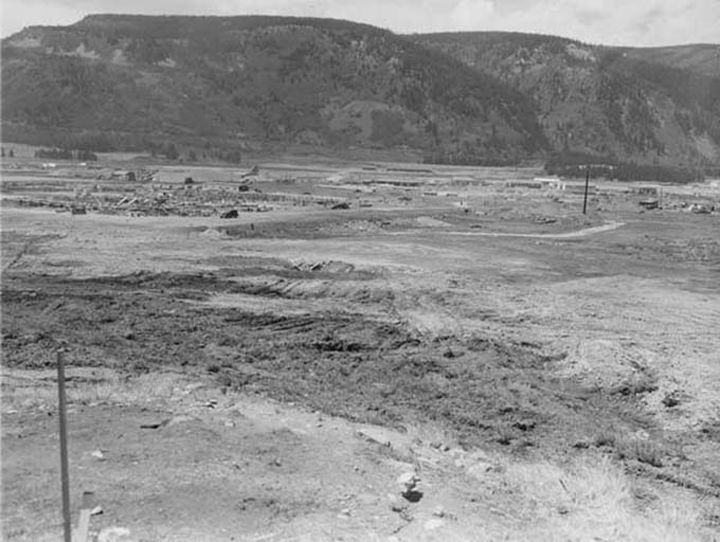 A photographer captures the “noisy, dusty” mess made by military engineers and civilian construction workers as Pando Valley is razed to make way for the Army’s new mountain training facility in 1942.

Soldiers lead a line of mules down a barracks-lined Camp Hale street while a dog trots alongside. The men of the 10th Mountain Division often used burros, horses, mules and teams of sled dogs to transport manpower and supplies to areas too remote for Jeeps and other vehicles to reach.

A photographer captures the “noisy, dusty” mess made by military engineers and civilian construction workers as Pando Valley is razed to make way for the Army’s new mountain training facility in 1942.

Almost 16 miles northwest of Leadville lie the remnants of Camp Hale, a former cantonment of the United States Army which trained the elite troops of the 10th Mountain Division. Deployed to the Italian Alps near the end of World War II, the soldiers of the 10th were instrumental in the Allies’ victory in Europe, using their unique training to take every objective and never give up any ground.

Today, little besides a collection of plaques and worn foundations remain of the camp itself, and little evidence remains of the extensive training the soldiers received in the wilderness surrounding the 9,200-foot-high camp, aside from rusty C-ration cans and bits of barbed wire and depressions in the forest floor from filled-in fox holes.

Now a picturesque wonderland for outdoor recreationists of all types, the serene Pando Valley 75 years ago not only played a major role in the war effort of the United States, but left an indelible mark on the surrounding area and the world.

The United States officially entered World War II on Dec. 8, 1941, the day after the bombing of Pearl Harbor in Hawaii. After the attack, Leadville, like every other American city, jumped headfirst into the war effort. The April 6, 1942 Carbonate Chronicle, Leadville’s weekly newspaper, announced the construction of a new army training facility in an article titled “Construction of Army Camp at Pando to start this spring.”

Inspired by tales of small detachments of Finnish troops on skis frustrating attacks by much larger Russian forces, the first unit to be equipped for this type of warfare, the 87th Mountain Infantry Regiment, was officially activated on Nov. 15,1941, with the 85th, 86th and 90th soon to follow.

“Army officers who have inspected the site… agree that the terrain at Pando is ideal for the project. Climatic conditions are superb, also, for winter comes early to this area, and leaves late,” reads the April 6 article. “Indications are that the army will train thousands of soldiers at Pando, giving them the skill and seasoning necessary for wartime service in the coldest fighting zones.”

At the time, Pando, a tiny village about 23 miles from Leadville just beyond the Eagle County border, housed only a few farmers’ and fishermen’s cabins and a small rail station on the Diego & Rio Grande main line. In its earliest days, a number of ovens had been established in Pando Valley during Leadville’s boom in the late 1800s to provide the large smelters of the area with charcoal. Valley residents would go on to ship timber from the area via the Diego & Rio Grande railroad, graze sheep and farm lettuce and spinach, among other crops. By the early 1940s, trains would frequently stop at the small Pando station to refresh their supply of ice from surrounding streams and beaver ponds when transporting fruits and vegetables. The little village also served as a base for fishermen from surrounding communities during the summer and avid hunters in the fall. But following the announcement of the construction of the new Army camp, the valley was flooded with military and civilian engineers. The village of Pando was consumed, and the placid landscape razed to make way for barracks and soldiers.

A group of administrators, shopkeepers and cooks were the first to arrive at the camp in the last week of May 1942. They immediately set to work creating a thriving town, even as construction continued around them. One article from the final issue of the camp newspaper describes the valley in those early days as a “noisy, dusty, confused inferno,” which sent its occupants directly back to pioneer days. Men and women spent those first months in separate dormitories, using sawhorses and rough crates as furniture and sleeping on Army cots. For months the first settlers of the camp had to make do without any running water, instead collecting rainwater for washing and heating it one bucket at a time on portable oil heaters. The plumbing situation wasn’t resolved for some time; water and sewer lines had to be torn up and reinstalled three times, each time deeper than before in an effort to prevent freezing.

As construction at the camp continued and military and civilian workers alike flocked to the area, the Army, alongside numerous local ski clubs and the National Ski Patrol, one of the only private organizations to ever actively recruit for the military, recruited accomplished skiers, experienced hunters and hikers and highly skilled rock climbers and other outdoorsmen as construction began on the new training site. Soldiers of the 85th, 86th, 87th and 90th regiments began their extensive training in Washington near Mt. Rainier.

Finally, by June, the name Camp Hale was officially announced as the camp itself began to take shape. First appearing in the Carbonate Chronicle June 29, 1942, the camp was named for Brigadier General Irving Hale, a native of Denver, United States Army veteran of the Spanish-American and Philippine-American Wars, and founding member of the Veterans of Foreign Wars.

Camp construction neared completion at the end of 1942, “and very soon the Pando Village was a forgotten thing because the Camp Hale area was populated with marching troops, mules, horses, snow buggies, half tracks, skiers and even huskie teams.”

The first edition of the Camp Hale newspaper, the Camp Hale Ski-Zette, was printed and distributed throughout the cantonment on Dec. 18, 1942, and announced the opening dedication ceremony and formal gala for the camp, to which all who had helped construct it were invited.