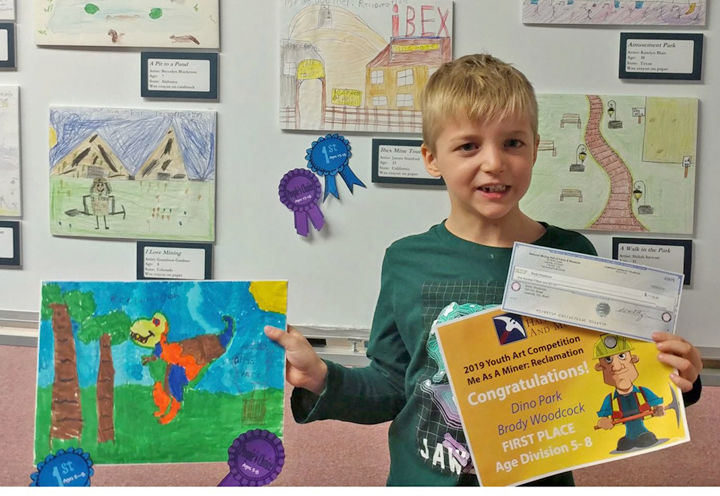 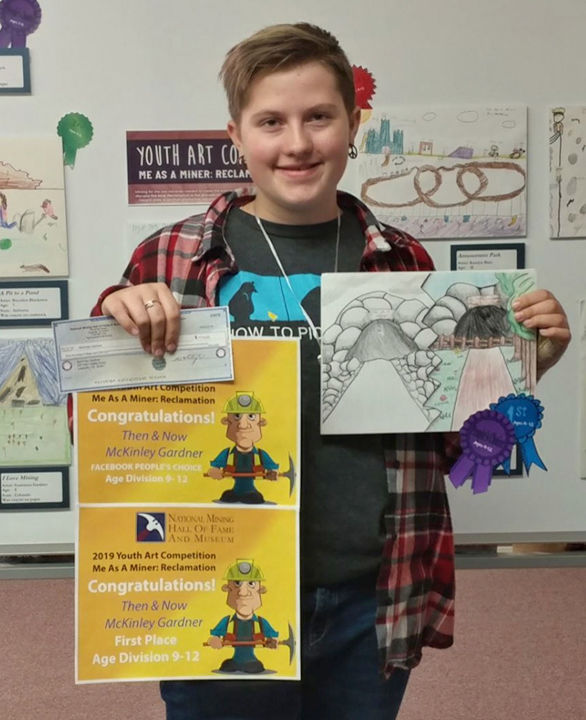 McKinley Gardner shows her winning entry, “Me as a Miner.”

McKinley Gardner shows her winning entry, “Me as a Miner.”

This year’s theme was reclamation, the process of returning mined land to its former state or to another productive and beneficial use.

McKinley submitted “Then and Now,” illustrating what a reclaimed mine site might look like after restoration. Her artwork, using colored pencils, featured the land looking dark and bleak after mining then restored to its former colorful vegetative state. The judges felt McKinley’s artistic interpretation and perspective drawing was strong while her side-by-side comparison of mined versus reclaimed captured the essence of the theme. She won first place and the People’s Choice award in the 9-12 age division. Last year she took third place with “Anime Miner.”

McKinley has begun experimenting with digital art, having purchased an entry-level digital drawing tablet with a portion of last year’s winnings. She hopes NMHFM will allow entries using that medium next year.

In the 5-8 age division, Brody Woodcock’s winning submission is reflective of his love of all things related to dinosaurs. His art suggests reclaiming a dormant mine into a “Dino Park.” His colorful marker artwork caught the attention of the judges, landing first place and People’s Choice awards. Brody intends to invest his prize money in his dinosaur collection.

Californian James Stanford took first place and People Choice awards in the 13-18 age division. His idea, “Ibex Mine Tours,” suggests reclaiming a mine as a tourist attraction, with a theme hotel and underground tours in ore carts. James and his family were visiting the museum during its Boom Days activities when he learned about the contest. His idea for a reclaimed site came to him right away, and he sat down with crayons and paper to produce his winning entry in less than a half hour.

Second and third place in the 5-8 age division went to “A Mine to a Park” by Jackson Milana of Arizona and “A Pit to a Pond” by Brycelyn Blackmon of Alabama.

There were no second and third place winners in the 13-18 age division. Additional entries were received from the states of Georgia, New York, Oregon, and Washington.

The winning artwork, along with additional selected submissions, is on display at the museum through the end of the year.