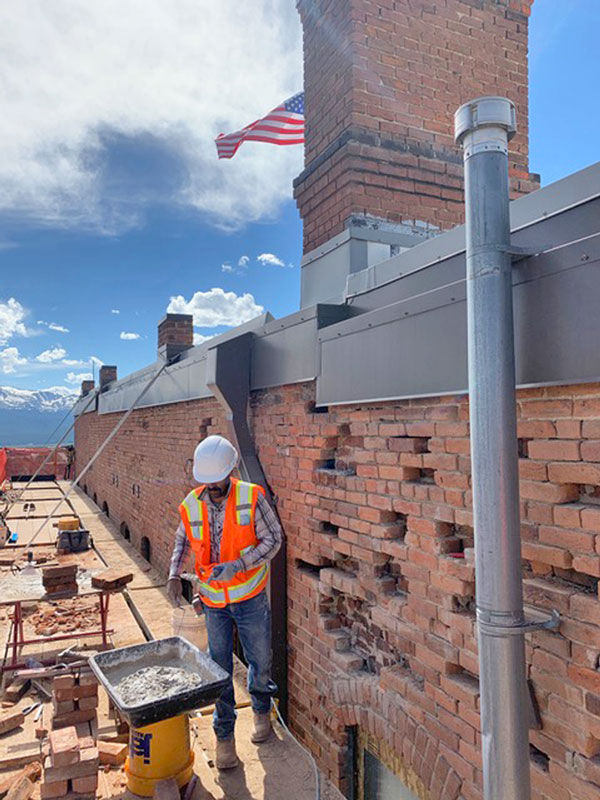 A mason with Agave Masonry & Landscapes handles mortar while standing on scaffolding set up against the Tabor Opera House’s south-facing facade close to the roof. The scaffolding has since been removed. 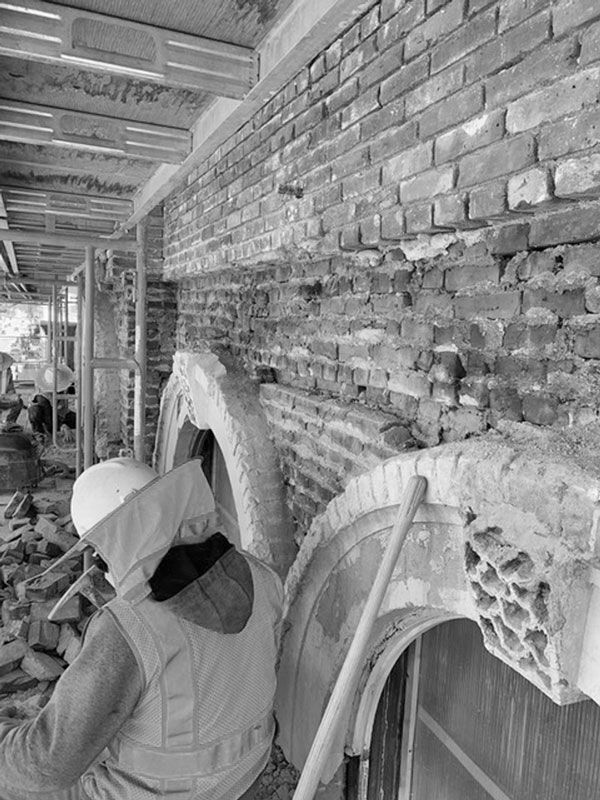 Perched on scaffolding set against the Tabor Opera House’s front-facing facade, a mason with Agave Masonry & Landscapes chips at a reclaimed brick. Crews worked carefully around the building’s arched windows. 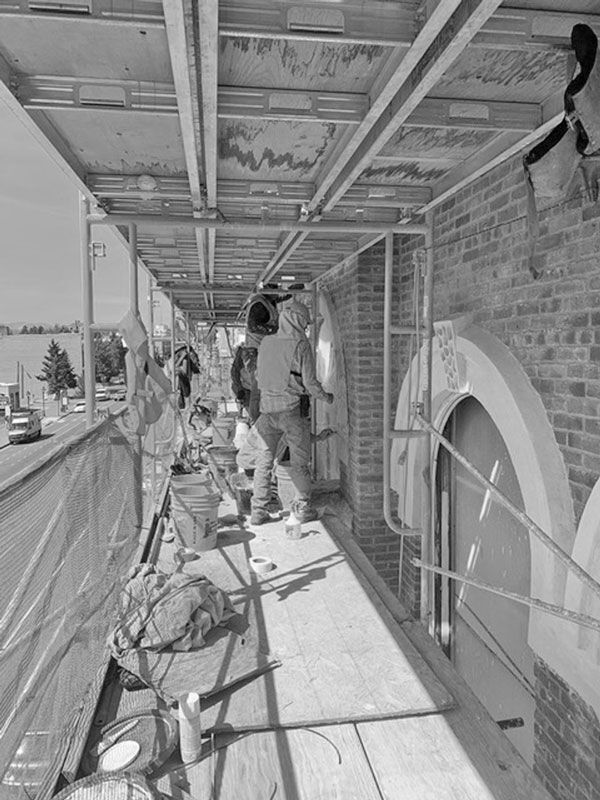 A mason with Agave Masonry & Landscapes handles mortar while standing on scaffolding set up against the Tabor Opera House’s south-facing facade close to the roof. The scaffolding has since been removed.

Perched on scaffolding set against the Tabor Opera House’s front-facing facade, a mason with Agave Masonry & Landscapes chips at a reclaimed brick. Crews worked carefully around the building’s arched windows.

Since securing a bid to restore the Tabor Opera House’s brick facade in early 2020, Agave Landscapes & Masonry, a Salida-based company, has taken on additional projects along Harrison Avenue, where historic buildings are begging for cosmetic and structural repair.

“For me at least, these structures were built well enough to last a long time, but like with anything, they need maintenance, and I think that was lost at whatever point in time,” said Thaddeus Hust, owner of Agave Landscapes & Masonry (ALM). “But helping to preserve a structure or an entire historic downtown also preserves a neighborhood’s character and identity. And I think people are realizing that these structures can also help local economies.”

Hust began his career as a mason more than 20 years ago while working a summer job in Durango. Over time, Hust grew fond of masonry for the creative aspects of the work. He built stone patios, retaining walls and placed boulders strategically in clients’ yards. In 2009, Hust began practicing preservation architecture, which seeks to preserve old buildings with historic value. ALM has since taken on a number of preservation projects throughout Colorado, including the Tabor Opera House in Leadville.

The Tabor Opera House project began in March 2020 after a building analysis revealed significant deterioration to the historic structure. After two summers of work, ALM removed scaffolding revealing the Tabor Opera House’s renewed south-facing wall in 2020 and west-facing facade in 2021. Although the project is not yet complete, Hust and his crew performed a number of procedures on the 142-year-old facade, a task that is tedious at best and requires an abundance of patience, according to Hust. ALM is also bidding for phase two of the project, which will begin this summer.

Hust’s initial reaction to the Tabor Opera House project was that a lot of work needed to be done, although he knew he had the right crew for the job. ALM’s nine employees are trained as high-production masons, meaning they work quickly to turn around large projects. Hust said they also work as traditional masons, which refers less to a specific skill and more to the knowledge required to work on old buildings. For instance, unlike newer brick sturctures, brick walls serve as structural support for old buildings, requiring patience and care as masons repair them.

ALM’s first step in tackling the project was to strip multiple layers of paint from the brick. Since some brick was too damaged to repair, the company ordered 14 pallets of brick from a salvage yard in Denver, each with 500 bricks created around the same time as the Tabor Opera House. Then ALM’s crew began the painstaking process of flipping or replacing each brick line by line.

After concluding the opera house project earlier this year, ALM moved its scaffolding a few blocks north to 510 Harrison Ave. And in December, ALM kicked off a similar project at the Herald’s home at 717 Harrison Ave. ALM spent recent months working to restore both buildings’ brick exteriors using similar methods to those seen at the Tabor Opera House.

But while Hust and his crew have found something of a temporary home on Harrison Avenue with one project underway and two completed, ALM’s history in preservation architecture extends beyond Leadville to other corners of Colorado and even abroad. Hust has worked in California, El Salvador, Oregon, Arizona and New Mexico. In Colorado, Hust’s home state, ALM has taken on projects throughout the Arkansas River Valley, Trinidad, Manitou Springs and Gunnison.

In addition to projects in Leadville, ALM is currently working on the Fox West Theater in Trinidad, which opened in 1908 as an independently owned and operated performance venue. In 2013, the theater closed after many decades of performances. Now, more than a century after opening, and as Trinidad’s art scene burgeons, the Fox West Theater is gearing up to reopen. While Hust isn’t typically involved after a project’s completion, when the public takes over the newly-renovated space, he said he’s happy that old buildings are being reproposed.

“I think we all want the same thing in terms of bringing new life to these buildings,” said Hust. “I think it’s important to recognize that if we do things the right way, these buildings will last another 100 years. And maybe creating more awareness about maintaining them more than every 100 years. Maybe every 20 years when it’s not as much work.”