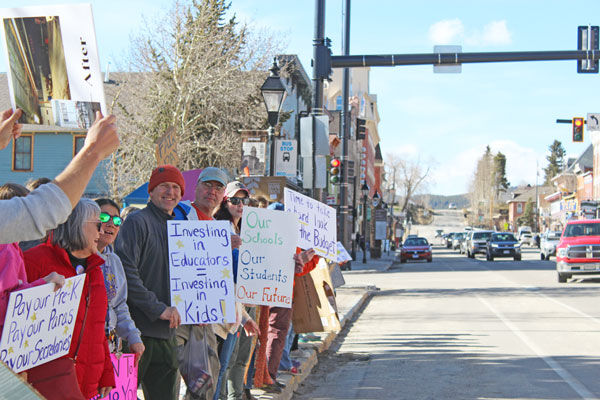 Lake County School District educators, parents and members of the public rally outside the courthouse in support of better salaries and wages for district employees last week. 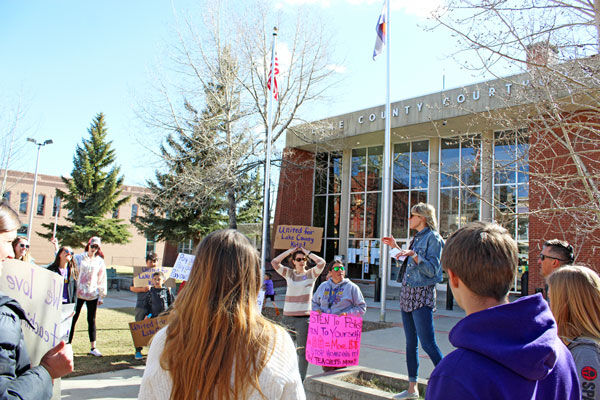 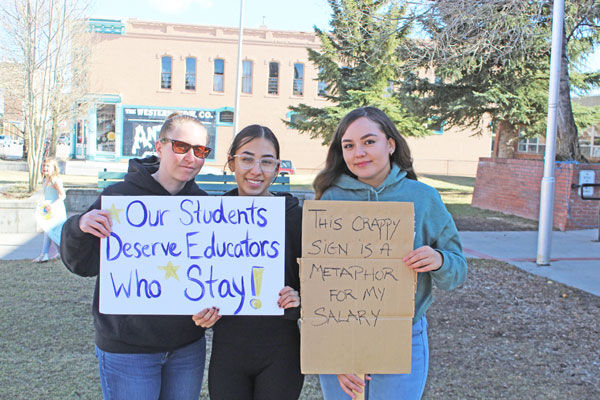 Lake County School District educators, parents and members of the public rally outside the courthouse in support of better salaries and wages for district employees last week.

The Lake County Education Association (LCEA) is expected to become a bargaining unit for the district’s preschool, paraprofessional and office staff after weeks of grueling contract negotiations.

The union and Lake County School District (LCSD) negotiation teams met for eight hours on May 6 to discuss certified teacher salaries. This was the third meeting over the last few weeks where both groups proposed salary increases.

Following the recent negotiation meetings, LCEA presented to the Board of Education on May 9 and argued that preschool teachers, paraprofessionals and office staff should be represented by LCEA and included in the district’s master agreement.

The Board of Education agreed on the condition that it receives letters signed by the majority of each employee group stating interest.

If the conditions are met, LCEA can represent preschool teachers, paraprofessionals and office staff in future contract negotiations. The union already represents certified teachers. Only certified teachers and special service providers are included in the district’s current master agreement.

The average teacher salary for non-charter schools in Colorado is $62,621. In Lake County, it’s $49,871, according to data from the Colorado Department of Education.

LCEA is proposing a base salary of $45,000 for Lake County certified teachers and a 21.56 percent wage increase for other employee groups.

The district said in a May 5 press release that it does not have the recurring funding to support this proposal.

The district has made two different proposals this negotiation season. Proposal A increases base pay to $45,000 and gives employees an annual step of 2.1 percent. They can qualify for a lane advancement at increments of $572. Teachers earn higher lanes by earning more certificates or degrees, and move up steps each year they work for the district. The current base salary for the district is around $36,000.

Proposal B is a $40,000 base pay with a 3.5 percent annual step, but the lane calculations stay the same. The average salary increase would be 13 percent.

LCEA members were adamant about including preschool teachers, paraprofessionals and office staff in these negotiations, which the distrct did not include in its proposals.

The state average turnover rate for all district employees during this time was 21.2 percent .

“We are seeing significantly below average compensation and significantly above average turnover,” said high school teacher Cody Jump. “And those things are certainly correlated.”

LCEA hosted a rally at the courthouse on Thursday, May 5 to request better wages for certified teachers, as well as the district’s paraprofessionals, office staff and pre-K teachers.

They chanted “What do we want? Teachers! When do we want it? Now!” and “Whose schools? Our schools!” Some local businesses have also put up signs that say “This business believes that Lake County educators deserve a living wage.”

Jeff Spencer, a math teacher at Lake County High School, is a member of LCEA and said the group has an interest in ensuring LCSD remains a viable, long-term school district for the community.

“In this town, our school is the social and educational bedrock,” said Spencer. “And if we can’t make sure that we have people in our buildings who should be in front of our kids, then that starts to fall apart pretty quickly.”

Beyond certified teachers, LCEA president Keely Kuehl said the union wants to make sure other district employee groups can make a living wage.

Hannah Scheer, an intervention literacy paraprofessional in the district, attended the rally and negotiations. She said employees who aren’t certified teachers are on an entirely different paygrade.

There isn’t an incentive for educators to move to Leadville if they are being paid $14,000 less than the state average, said Scheer. Seeing the high turnover of teachers each year is disheartening and creates instability for students.

“I love these kids,” said Scheer. “I see how much they struggle and they deserve a community that gives a ‘you know what.’”

Preschool teacher Stephanie Koucherik said it’s hard to pay bills on the preschool salary. “We’re living paycheck to paycheck, and it’s very important that we start to be noticed just like the rest of the district.”

During the May 6 negotiations, LCSD Superintendent Bethany Massey said she wanted to know that a majority of preschool teachers were actually interested in being part of the contract with the district. Members of the district’s negotiation team did not want to change the preamble of the master agreement to include preschool teachers and other groups until the Board of Education approved it.

Jump estimated that more than 40 preschool teachers and paraprofessionals showed up to the negotiation meetings, whether on person or Zoom.

But this turnout isn’t a cause for celebration, said Jump. It means there is a significant enough problem that people are taking action against.

LCSD HR Manager Kathleen Fitzsimmons emphasized wanting to keep the master contract flexible for different groups, not pigeonholing them into something they didn’t sign up for.

“The way the contract is currently written is very much relevant to the classroom teacher,” said Paul Anderson, the district’s chief financial officer. The contract doesn’t necessarily transfer over to other employee groups. If they are going to be represented in the contract, there’s some substantial contract work that needs to take place.

The district pays its teachers with funds that mostly come from taxes, with a significant portion being property taxes in Lake County, according to the press release.

The district expects to receive an additional $600,000 from the state which will go toward staff pay raises. It has also worked to secure an additional $300,000 for staff raises through grants.

“Anytime we’re getting this grant funding that helps to support salaries, there’s still a little bit of a risk in that because these grants don’t last forever,” said Massey.

The district negotiations team met with LCEA again on May 11 — before the Herald’s print deadline — to further discuss the proposals. This time, LCEA represented preschool, paraprofessional and office staff during the meeting.