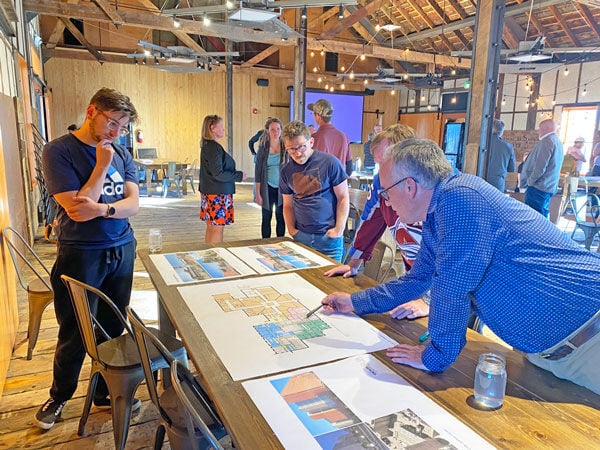 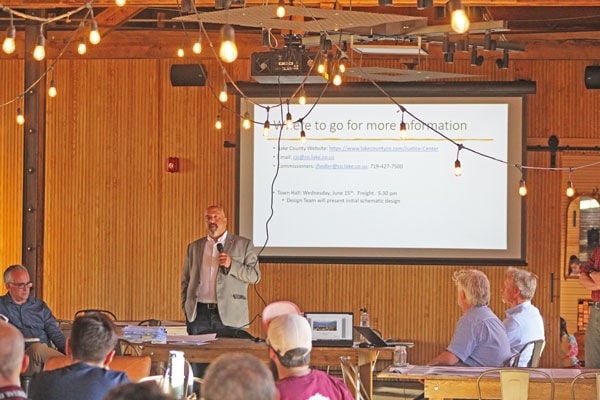 Lake County government hosted a town hall at FREIGHT on Wednesday, June 15 to share updates on plans for the Community Justice Center.

County Commissioner Jeff Fiedler said development will move pretty fast now that the site is secured and a design and construction team are in place.

The project is in its design development phase right now. Design plans must be completed by the end of the year so the county can obtain permits and break ground in the spring, said Fiedler.

If the county misses a construction year, it’ll cost $5 to $7 million because of current price escalation and inflation, said Fiedler. “So we are hurrying to make the ‘23 construction year.”

Architects from Reilly Johnson Architecture (RJA) and Fentress Architects went over floor plans and possibilities for the building’s exterior during the town hall. Community members asked questions and gave their concerns. The architects set up three tables with site maps and floor plans for community members to examine and provide feedback.

Bob Brashears, a principal architect with RJA, said the firm has been doing justice-related work for 40 years. “It’s basically all we do,” said Brashears. “This is what we know.”

“This project has been a long time in the works,” said Brashears, adding that RJA created an initial  master plan for the building back in 1999, with the latest master plan introduced in 2016. “So it’s very well-studied.”

FCI Constructors, the same company that built Lake County Elementary School, will operate as the project’s general contractor, said Fielder. FCI employees are used to working in the winter and high altitude – on time and under budget, the company said  – so the county is confident construction crews know what they’re getting into.

Dynamic Program Management, which offers professional service and manages the county’s master budget, will serve as project manager. The group already completed the hiring and selection process for architect/design teams and  the general contractor, said Fiedler.

The county is also working with mechanical, geotech/geoengineering/remediation and environmental/commissioning teams.

The building has a $45 million “all-in". This project will cost more than the elementary school did, factoring in inflation and specialty building, attribution. Jails are more expensive to build than classrooms, attribution.

The project is funded with a certificate of participation (COP), a type of financing that allow an asset (typically real estate) to be mortgaged. A municipality repays the mortgage through annual lease payments.

Commissioners are pursuing a COP to fund the justice center for many reasons, according to a frequently asked questions document on the Lake County website. A COP enables the commissioners to act faster on a mandatory project that must move forward quickly.

“Interest rates are at historic lows, and delay will likely only increase borrowing costs,” the document says. It continues to say that the county is currently failing to meet its statutory mandate to provide safe and adequate jail and courthouse facilities, so introducing the matter to voters may no longer be appropriate.

The Community Justice Center will house both a new courthouse and jail in a 55,000-square-foot facility. The building site is the area between Harrison Avenue and Monroe Street where slag piles currently sit.

The county chose this site for a variety of reasons: it has sufficient acreage and existing utilities, allows the community to remediate a blighted site and keeps the facility close to town.

The law enforcement and detention center will be “hidden” in a single-floor building sitting behind the courthouse with separate parking and access points. “It should be a homogenous piece of architecture,” said Brashears.

The jail building will probably have a flat roof and will not have a fence around it, such as razor ribbon or barbed wire fencing typical with detention centers, said Brashears.

Fencing is normally used to keep people away from jail windows, but this jail will not have windows. Instead, daylight will come in through the roof with skylights.

Brian Chaffee with Fentress Architects said there are two courtrooms planned, with ample conference and meeting space adjacent to them. The public corridor would lead down to a community multipurpose room. The room could be used for both court purposes like jury assembly or community events like lectures and banquets.

The architects said they try to gather imagery and knowledge about the community they’re working in to help inform their design plans. Lake County has incredible views and scenery, and the team wants to try and incorporate some of these outdoor elements into the design.

Lake County’s current courthouse was built in 1955. Courthouses built during this time have a minimalist style and aren’t particularly compelling or specific to any given community, said Chaffee. They could fit in anywhere.

He shared examples of modern courthouses that are more “of their region.” A courthouse in New Mexico, for example, adopted a pueblo architecture style.

To help the Community Justice Center fit into the community, the team is also trying to make the jail’s exterior look unlike a conventional jail. Brashears assured the community that the jail building will not look like a jail.

RJA works hard to do this and has built a number of jails around the state, said Brashears. A downtown Glenwood Springs jail, for example, doesn’t look like one when people drive past it. “We want it to be an unobtrusive neighbor.”

Page Phillips, another principal architect at RJA, played a game with community members called “jail or no jail” to show how detention centers can blend into the community. Phillips showed the audience photos of different buildings and had them guess whether it was a jail or something else, which proved difficult.

Since Lake County does not have its own functioning jail, officers have to transport inmates to jails in Adams, Teller, Park and Washington counties. Having to move inmates around has been a burden on law enforcement, said Interim Sheriff Heath Speckman.

Leadville’s City Hall was built in 1890, so the community is a bit overdue for an updated courthouse and jail, said Leadville Police Chief Hal Edwards. Part of law enforcement reform is having proper facilities, he added.

Stakeholders hope having a jail right next to the courthouse will create a safer environment for both inmates and law enforcement.

Lake County Judge Jonathan Shamis said the purpose of the project is not only to build a jail and courthouse, but to also consider how the facility might address issues in the justice system.

Shamis emphasized the importance of continued community participation in building plans. “This is where conversation just needs to begin, he said.”

One community member who lives near the site expressed concern about mine shafts in the area that are possibly 400 to 500 feet deep.

Landmark Environmental previously drilled in the area. The architects are reviewing the group’s study to identify the mine shafts and decide what to do with them, but the company doesn’t think the shafts will be an issue.

The remaining slag and elevated concentrations of metals in the site’s soil can potentially cause health and environmental problems when the material is disturbed in construction, according to the county website.

Another concern for neighbors is that the soil might blow toward their homes during construction.

Fiedler said the county conducted initial soil testing and drilling, and Landmark Environmental will do a more detailed soil examination when?. When the site plan is locked in, the goal is to move as little soil as possible because it’s expensive and can cause disruption. Landmark Environmental will meet with neighbors and the community about these soil concerns when the site plan is done.

The county will also communicate these environmental concerns to the construction company once stakeholders know which areas of soil need to be moved.

Another site neighbor questioned whether there will be any traffic changes at the Harrison and Monroe intersection, such as building a stop sign or stop light.

Fiedler said the county hasn’t had conversations with the Colorado Department of Transportation (CDOT) yet, but will conduct a traffic study in the future. Anyone who wants to build next to a state highway needs to work with CDOT to figure out an access plan.

Full Circle of Lake County employee Luciano Galvan said he feels like the Community Justice Center is more of a detention center than a community center. He suggested the county could also build a rec center, museum or swimming pool in addition to the justice center.

Community member Kate Bartlett lives near the construction site and said she’s in favor of the project and appreciates the county’s efforts to work with neighbors of the site.

As a close neighbor, it’s easy to say the project would be a hassle, said Bartlett, but she’s OK with it.

The county will be updating its website with additional information about the project at  https://www.lakecountyco.com/Justice-Center and is accepting additional feedback.