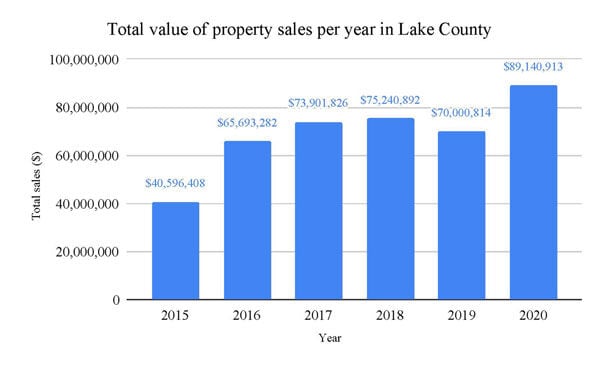 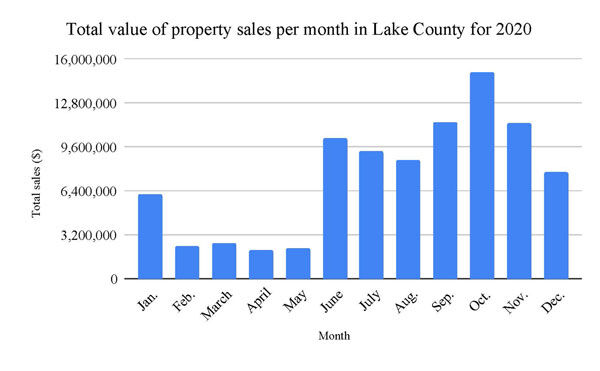 Last summer was a particularly active time for Lake County’s real estate market, with a high of over $15 million in sales in just one month.

Last summer was a particularly active time for Lake County’s real estate market, with a high of over $15 million in sales in just one month.

Throughout the past five years, Lake County’s real estate market value has more than doubled as housing inventory decreases and demand skyrockets.

As sale prices increase in Lake County, so have the number of out-of-state buyers. In 2015, 31 properties were sold to non-Coloradans. That figure has risen significantly over that past five years to 213 in 2020, an increase of 92 since 2019, according to LCA. Although some are buying second homes in Lake County, Heyde says many of his clients are settling into primary residences.

“People are sick of the city,” said Heyde, who added that there was a particular spike in the local market during the COVID-19 pandemic, when masses flocked to mountain towns throughout the country to work virtually.

According to Heyde, many of Lake County’s latest home owners are millennials with young families. Of primary concern for them is internet connectivity, as many are not necessarily employed in Lake County.

To meet this demand, several contractors in Lake County are building subdivisions of single-family homes that are full of amenities, like new appliances and high-speed internet.

Since 2016, High County Developers, owned by John Lichtenegger, has been building a 40-acre housing development on the north side of Leadville. A 2016 site plan for the development calls for 35 single-family homes, 36 townhomes, a 28-unit apartment complex and seven condominiums. Complete with fiber optic network, the Railyard will also offer commercial vendors on site.

Although the Railyard is not yet complete, the development has already generated over $7 million in property sales.

Heyde, who has worked primarily on selling Railyard properties over the past year, said 16 of his sales are currently under contract, and that four have closed. Of those 20 properties that Heyde is selling, only three buyers are non-Coloradans. Nine of the 20 buyers are interested in making the Railyard their primary residence, Heyde said.

KW Construction and Restoration (KWCR), a contracting company owned by Kyle Welch, an area local of 33 years, is building a subdivision off Evergreen Drive called Westwoods Subdivision. Welch said his company is erecting 54 homes on the property, 15 of which will be completed by the end of 2021.

In addition to the subdivision, Welch said he receives three or four calls every week from individuals requesting a newly built home. Although some are local, Welch added that most live out of state. KWCR is currently involved in 147 projects throughout central Colorado.

“We need to get homes built,” said Welch. “The demand just keeps growing.”

Another Leadville resident, Jack Saunders, who has operated the contracting firm Saunders Company for more than 40 years, is proposing a 20-home subdivision called Tabor’s Star in Leadville. Development plans for the subdivision are slated for review with the Lake County Planning Commission later this month.

Saunders said his company is currently booked through 2023 with construction projects. The contractor added that a rise in material costs during the pandemic is not deterring families from wanting to build in Lake County.

“Leadville has always been boom or bust, and that goes for the housing market as well,” said Saunders. “People are just bent on getting to Lake County.”