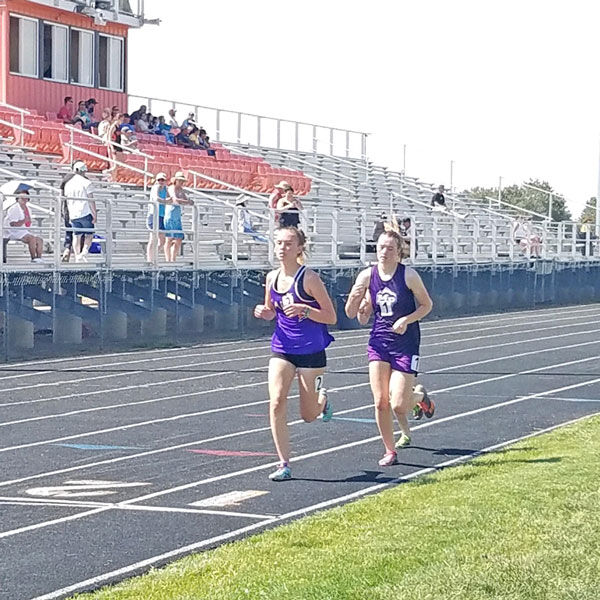 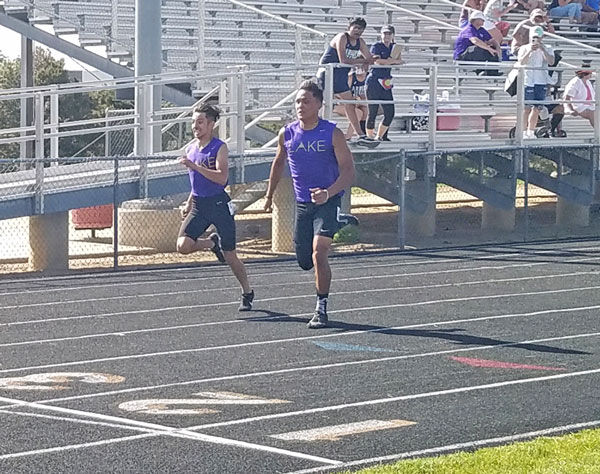 Fabian Jimenez and Anthony Martinez race to a tie in the 200 meter sprint at the Frontier League Championships last week.

Fabian Jimenez and Anthony Martinez race to a tie in the 200 meter sprint at the Frontier League Championships last week.

The win was the fourth consecutive for the men, and they easily ran away with the honor, besting second place Middle Park High School by 113 points. But Thursday marked the first team victory ever for the women since Lake County entered the Frontier League over a decade ago. Though the girls’ competition was much closer, in the end the Lady Panthers beat Middle Park by 33 points. The victories were team efforts, with every athlete contributing points to the final scores.

A few of Thursday’s surprises came in the women’s throwing events. Joci Holbrook upset the favorite from Bennett and won the discus with her toss of 74’ 4.” She also increased her shot put by almost two feet to reach 26’ 5” and place second in that event. Justyne Pereida stepped out of her team manager role to participate in the throws. She accomplished 24’ 7” in the shot put to take fifth.

The Lady Panthers finished first, second and third in the triple jump. Morgan Holm won the event with a personal best mark of 28’ 4.”  Molly Coleman (27’ 4”) and Jaycee Windorski (26’ 7”) filled the silver and bronze positions.

Aurora Marruffo won the long jump with a personal record (PR) of 15’ 7.5.” Kaytlin Sprague and Makayla Arrellano also accomplished PRs in the long jump.  Sprague’s leap of 13’ 10.5” earned her a fifth place finish, and Arrellano took sixth by jumping 13’ 6.75.”

Windorski earned the title of League Champion in the high jump by clearing 4’ 8.” Coleman cleared 4’ 2” and took fifth, and Holm jumped 3’ 8” for eighth place. Windorski also finished seventh in the 200 meter dash with a time of 31.57 seconds.

Anthony Harris reached a PR of 8’ 11” in the pole vault, and because he didn’t miss a height until he went out, he took second place. Eli Durand’s PR vault of 8’ 5” earned him fifth place, and Josiah Horning took seventh by clearing 7’ 5.”

Ben Lowry and James Garrison both cleared 5’ in the high jump, but Lowry claimed the second place spot because he had fewer misses.  Garrison finished third.

Ivan Hinojos improved his shot put to 35’ 6” and took third in that event. His discus toss of 104’ was enough for fourth place. Lowry, trying the discus for the first time, reached 78’ 6” and seventh place.

Lake County’s coaches were awarded Coach of the Year honors for both the men’s and women’s teams. This all-star staff consists of Jamie Peters, who coaches sprints and has all of the fun and creative ideas; Pat Cade, who coaches distance and high jump and runs time trial miles during meet lunch breaks; Brandon Leverett, a Lake County alumni who works with mid-distance runners and relays; Ashley Leitner, who single-handedly put together the team’s successful pole vault program; John Baker, another Lake County alumni who still holds the school record for the shot put; and Amy Peters, who handles hurdles, jumps and all of the administrative duties.