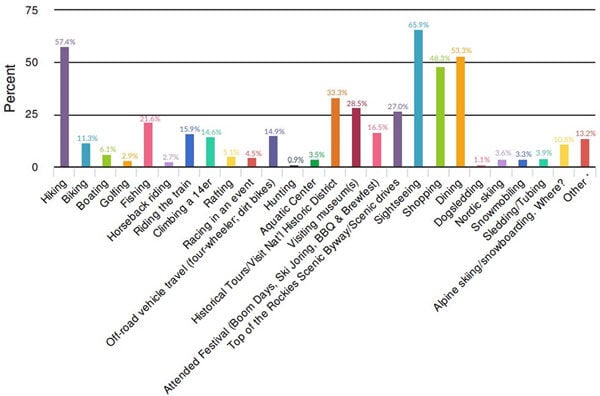 Results from a 2019 survey that the Lake County Tourism Panel disributed to visitors show that Lake County tourists participate in a number of activities during their time here. 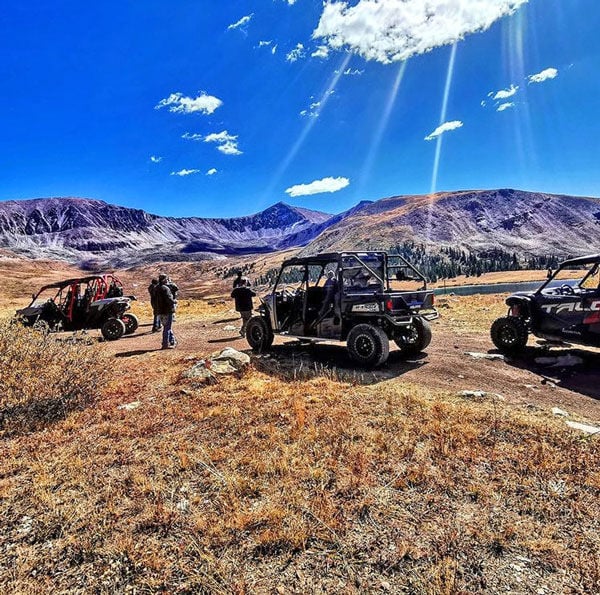 Results from a 2019 survey that the Lake County Tourism Panel disributed to visitors show that Lake County tourists participate in a number of activities during their time here.

After the Climax Molybdenum mine closed in 1987, prompting a mass exodus of nearly one third of Lake County’s population at the time, the county’s economy became increasing reliant on tourism, an industry that has since reached new heights in mountain towns throughout Colorado.

“We began harnessing our natural resources in a different way,” said Facilitator for the Lake County Open Space Initiative Mike Conlin, who has lived in Lake County for several decades. “Now people from all over the world visit to take in the forests, mountains and rivers, and all the natural beauty that Lake County has to offer.”

So far this year, the Leadville and Twin Lakes Visitor Center  (LTLVC) has exceeded total visitation numbers from previous years with 17,022 guests from January through September. In July, which is typically LTLVC’s busiest month, the center saw 4,743 guests. Overall, LTLVC’s visitation has risen steadily since 2018. According to a 2019 survey distributed by the Lake County Tourism Panel (LCTP), tourists participated in a number of activities during their time in Lake County, including hiking, biking, fishing, historical tours and sightseeing. The majority of visitors stayed for just one day.

Additionally, records kept by the Leadville Lake County Economic Development Corporation (LLCEDC) show a significant increase in sales tax revenue for Leadville this summer. Figures for August 2021 show that Leadville businesses raised $301,875, a more than $74,000 increase compared to August 2020. Leadville also saw an increase in lodging tax revenue, which is paid by visitors who stay at lodging establishments like hotels and motels, from $197,474 in 2019 to $211,830 in 2020, despite the COVID-19 pandemic.

“We’ve been discovered,” said LLCEDC Executive Director Marla Akridge. But Lake County’s quickly-growing, tourism-driven economy is heavily reliant on its surrounding forests, which are susceptible to wildfire. In other Colorado towns like Grand Lake, which also relies on recreation tourism as an economic driver, wildfires like the East Troublesome Fire have altered tourism and scarred beloved business corridors.

“As a resident of Grand Lake, the hardest thing is watching this fire continually take from our community even a year later,” said Emily Hagen, executive director of the Grand Lake Chamber of Commerce and Visitor Center. “Tourism has returned and we are rebuilding, but some things won’t ever be the same.”

In recent weeks, aspen groves throughout Lake County have exploded in a collage of color. From colorful dots of land seen from a distance at the base of Mount Elbert to old county roads that pass through seas of yellow, visitors from around the world have come to watch the leaves change in Lake County.

“Imagine if we were to lose our aspen groves,” said Conlin. “Yes, they would regrow eventually, but think of what we’d lose for a year or two. The visiting experience with changing leaves in the fall is far more memorable than without.”

According to the Lake County Tourism Panel’s 2019 survey, 27 percent of visitors found Leadville through the Top of the Rockies Scenic Byway, an iconic highway that snakes over mountain passes offering scenic views in any direction. Yet some visitors are deterred from making the drive when clouds of smoke hover over Lake County, as they often do during fire season.

LTLVC Director Katie Hild said that during peak fire season the visitor center receives two to three calls a day from tourists asking if the mountains are visible. Often times, if the answer is no, tourists will cancel or reschedule their plans to visit Lake County. A number of callers, many of whom are older, also ask if the combination of Leadville’s elevation and smoke will restrict their breathing.

Dave Santucci, founder and principal consultant for Mission2Market, a firm that contracts with the Lake County Tourism Panel, said that while some out-of-state visitors may be disappointed by smoke, many who come from the Front Range, for example, are actually escaping the thick clouds. Santucci added that smoke leads to fewer breathtaking photos of Lake County being shared after a visit, but can still drive visitation from areas with worse smoke levels.

Dan Conley, who owns Leadville ATV Tours, a month-old business that offers guided tours to scenic areas, said that his business is reliant on the beauty of Lake County. Conley gauges a tour’s success by the gasps he hears from participants. “People who have never been here before don’t know what they’re missing on smoky days,” said Conley. “But on clear, beautiful days, there are far more gasps; people are really impressed by what they’re seeing.”

As central Colorado towns like Dillon and Frisco continue to modernize, Norwood Price, who works at the Colorado Visitor Center in Silverthorne, has begun sending tourists to Leadville for what he calls “the last truly historic experience in Colorado.” Throughout this summer, Price said he would refer two to three people a day to Leadville for attractions like the Route of the Silver Kings, a 14-stop tour that highlights old mines and ghost towns just outside of Leadville.

As previously reported in Our Forests, many of these historic sites, like the Matchless Mine, lie within forested areas and could be lost during a wildfire, presenting a potential blow to Lake County’s tourism-based economy.