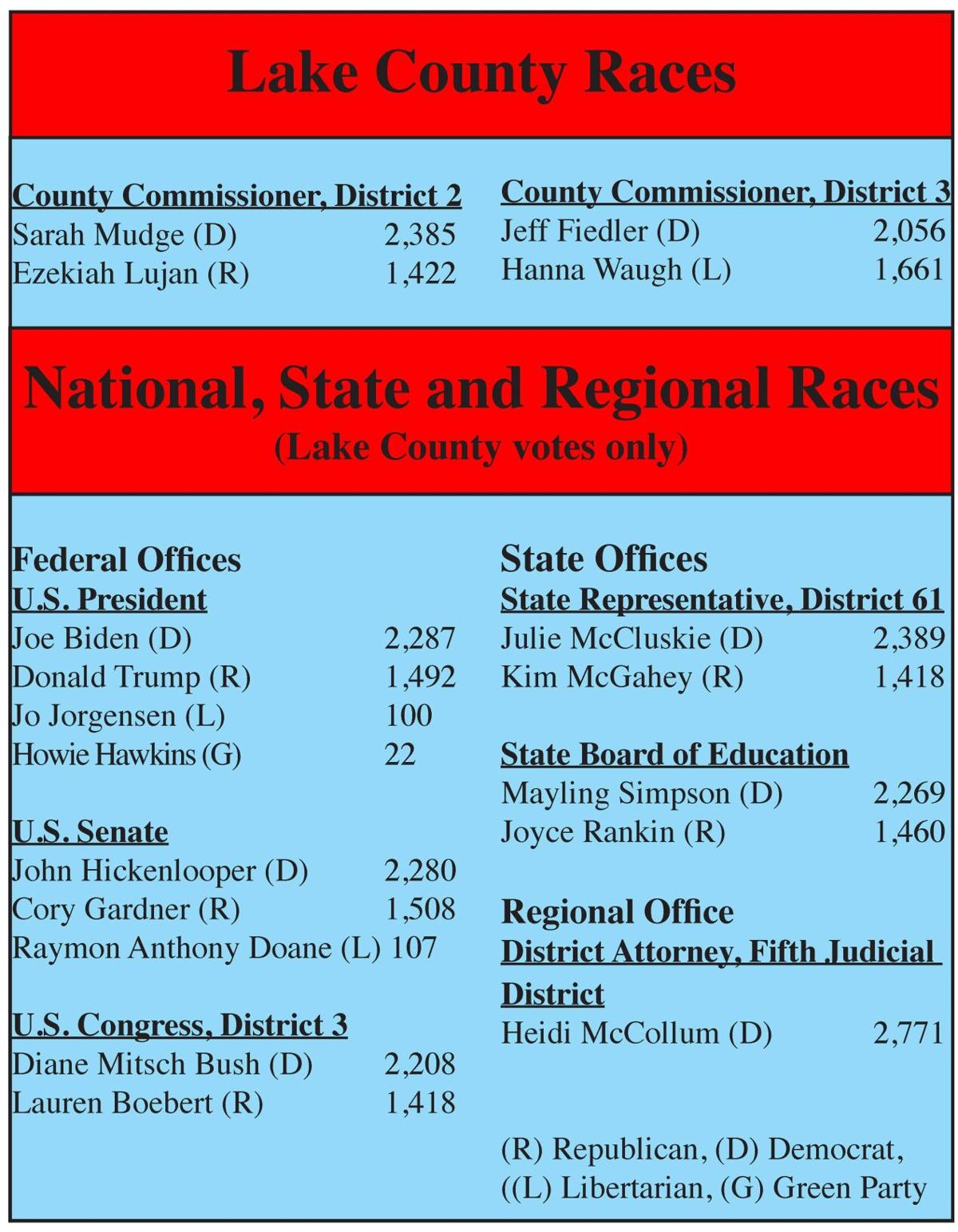 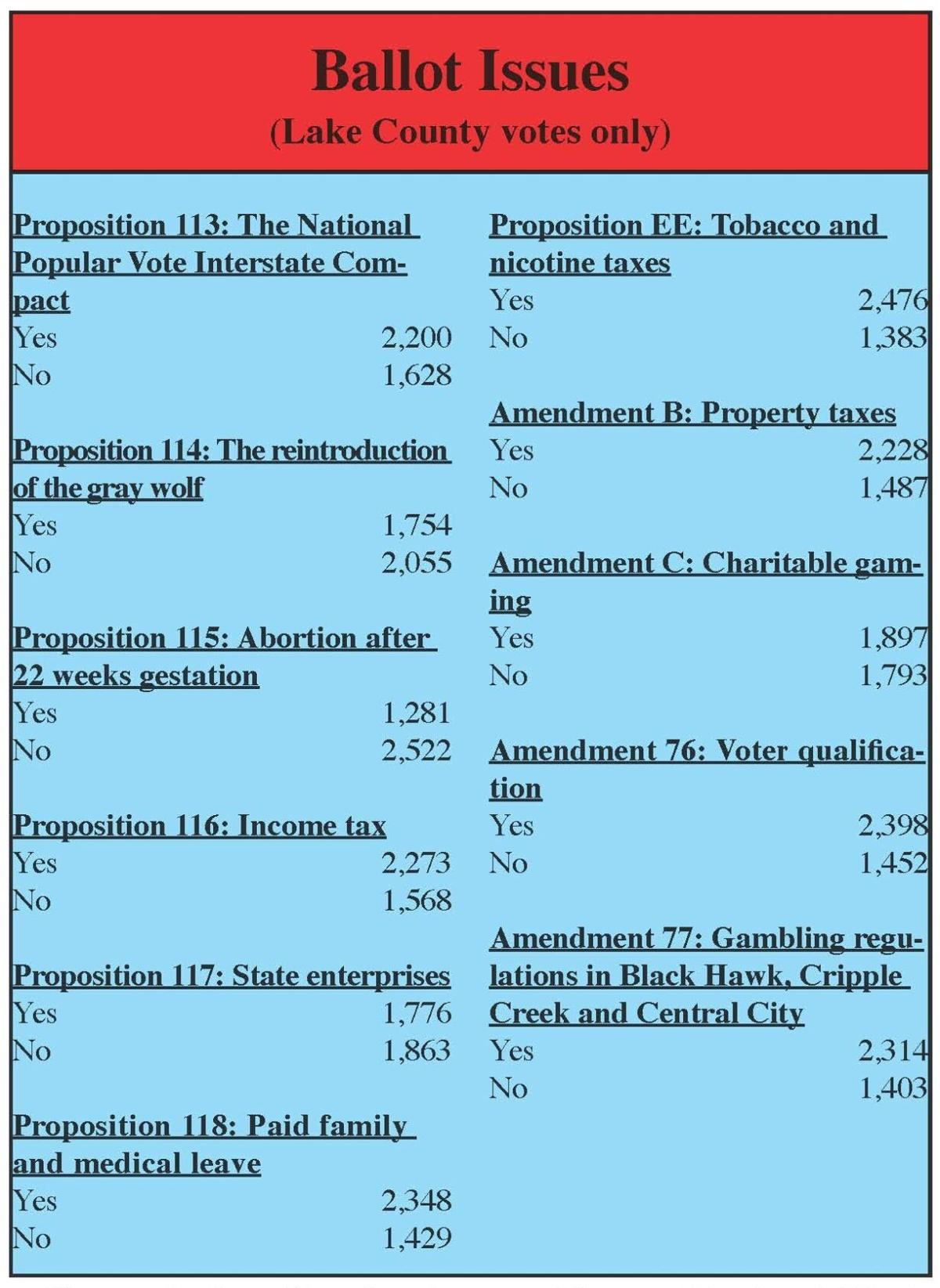 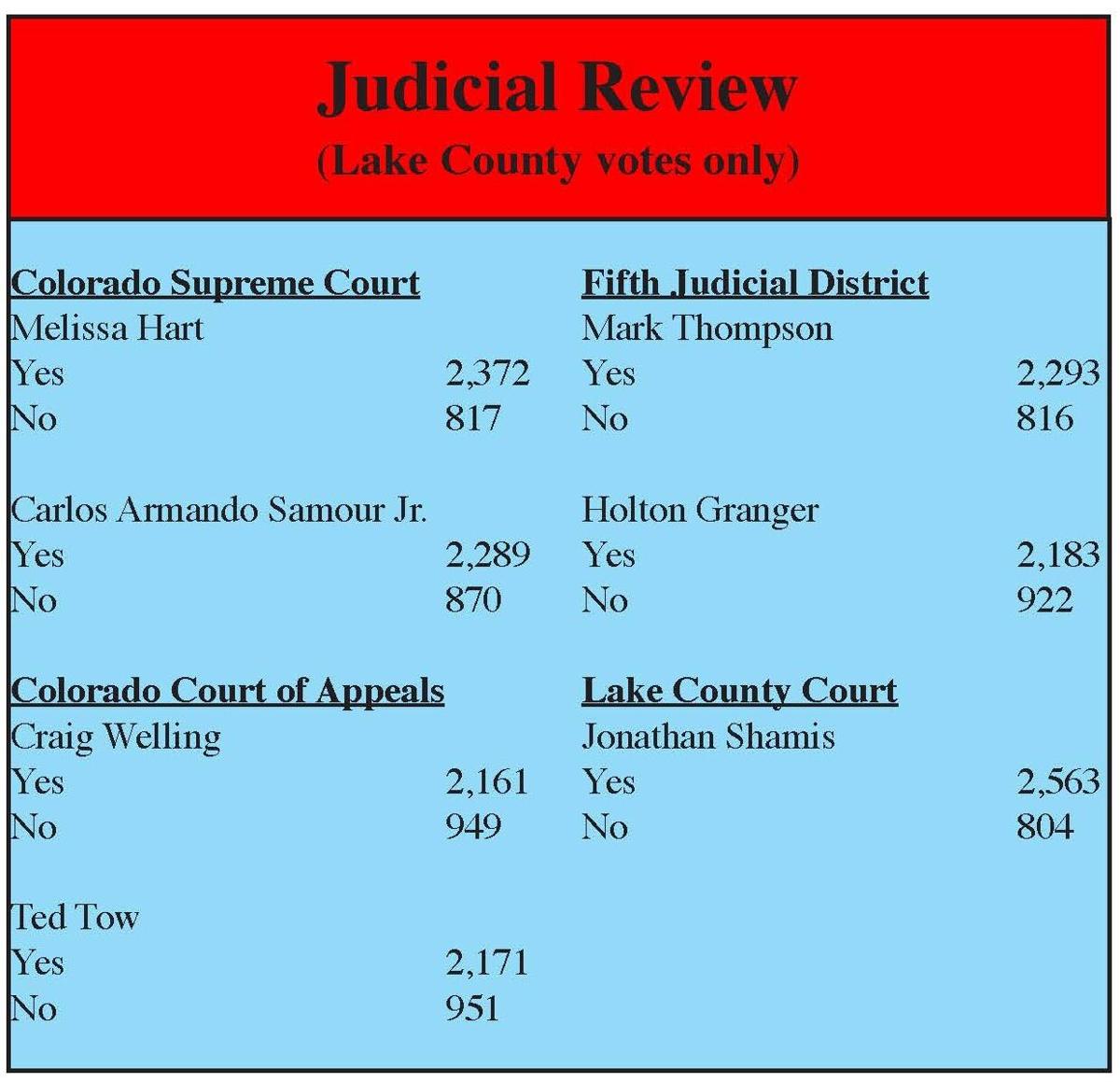 Many Lake County voters cast their ballots early this year, with 58% percent of registered voters having mailed or dropped off ballots before Nov. 3, according to data from the Colorado Secretary of State’s Office. By 8 p.m. Tuesday night, the Lake County Clerk and Recorder’s Office had counted 3,987 local ballots in total.

“I’m thrilled to continue the next four years with a strong team and a strong board,” Commissioner Sarah Mudge told the Herald.

“I’m excited to take on this work for all of the county,” Fiedler said.

Though Waugh did not win the District Three commissioner seat, she said she appreciated the experience of running a campaign and the opportunity to be engaged in local politics.

Diane Mitsch Bush, a Democrat out of Steamboat Springs, secured a majority vote from Lake County as the representative for Colorado’s Third Congressional District. Mitsch Bush received 2,208 votes to Republican Lauren Boebert’s 1,418. The statewide race between Mitsch Bush and Boebert was too close to call at press time.

Democrat Julie McCluskie, the incumbent, earned a win in Lake County, and across District 61, for State Representative.

In addition to local, state and national seats, Lake County voters made decisions on a number of constitutional amendments and propositions.

A state-run paid family and medical leave program, as advocated for in Proposition 118, was supported locally. The proposition passed at the state level.

Proposition 115, which sought to restrict abortion access after 22 weeks gestation, was struck down statewide, with Lake County voting nearly two-to-one against the measure.

The majority of local voters voted “yes” on Amendment B, a ballot measure aiming to repeal parts of the Gallagher Amendment. If the amendment passes statewide, Colorado’s current fixed ratio for residential and commercial property tax would be eliminated and the taxes would be frozen at their current rate.

Two of the state’s other tax-related ballot measures were supported by the majority of local voters.

About 64% of local voters supported Proposition EE, which is set to increase taxes on tobacco nicotine products. The measure passed statewide; revenue from the proposition will fund preschools, K-12 education, affordable housing, healthcare and tobacco education.

The majority of local voters also chose to reduce the state income tax to 4.55% by voting “yes” on Proposition 116. The statewide result for Proposition 116 was not available at press time.

Amendment 77, which provides residents of Black Hawk, Cripple Creek and Central City control over certain rules regarding casino games in the cities, was also widely supported in Lake County. The amendment passed statewide.

Additionally, Lake County voted in favor of Amendment C, which prompts reforms to the state’s charitable gaming regulations allowing nonprofit organizations to get licensure for bingo and raffle games after three years of operation. The statewide result was too close to call at press time.

Amendment 76, which seeks to change language in the state’s constitution to clarify that only citizens have the right to vote, won locally by a margin of 946 votes. The statewide result was not available at the Herald’s publication deadline.

Proposition 113, which would enter the state into the National Popular Vote Interstate Compact, also received 572 more votes of support than opposition in Lake County. The statewide result was too close to call at press time.

Proposition 114, which seeks to reintroduce gray wolves to Colorado, lost in Lake County by 301 votes. The statewide result for Proposition 116 was too close to call at the Herald’s publication deadline.

The majority of Lake County voters did not support Proposition 117, which would require voter approval for the creation of new state government enterprises with fee revenue exceeding $100 million in their first five years of operation. The statewide result for Proposition 117 was not available at press time.