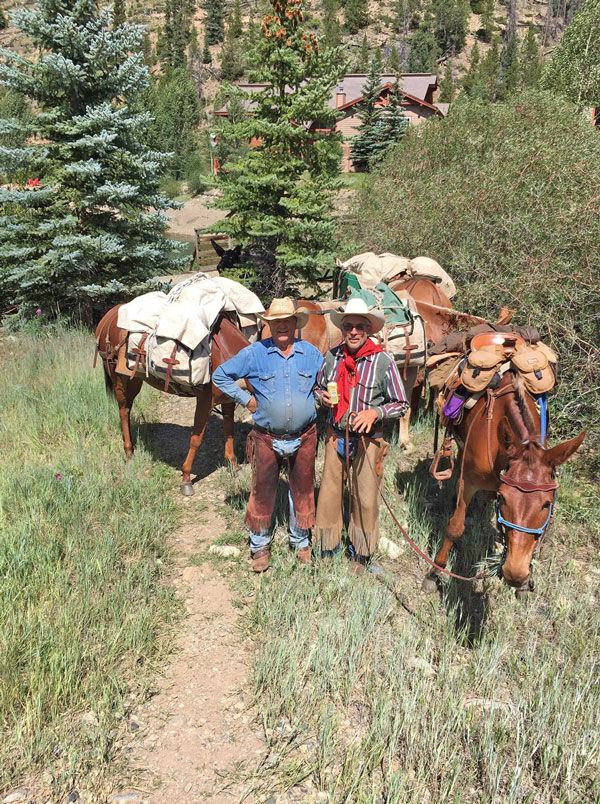 Jacob Skobel and Dave TenEyck enjoy a cold beer, gifted by a Breckenridge local, with their mules on the Colorado Trail. Bridger the mule is to the right. 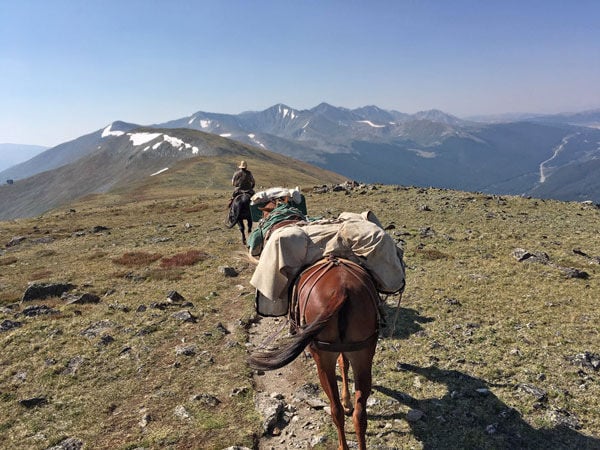 Jacob Skobel and Dave TenEyck enjoy a cold beer, gifted by a Breckenridge local, with their mules on the Colorado Trail. Bridger the mule is to the right.

“Our lives today are infinitely easier than their lives, but I am not sure our lives are better,” Leadville local Dave TenEyck wrote of his ancestors before leaving for a 120-mile trek on the Colorado Trail in August. “I intend to relive those less hectic times.”

For eight days, TenEyck and Jacob Skobel, former owner of Leadville outfitting company Mega Mountain Magic, traveled from the plains of the Front Range to the mountains of Leadville as their ancestors might have — on the backs of mules.

TenEyck, who had covered much of the Colorado Trail with an assortment of equines before August’s trip, took to the trail on the back of Bridger. Skobel rode Bella.

Three of the mules hauled panniers that contained gear and food for the men and 160 pounds of compressed hay cubes for the mules.

Nellie, a 19 year-old mule who TenEyck described as “dramatic,” and Judie, a grumpy 20 year-old Belgian mule with a propensity for nibbling humans, led the pack string. Harriet, a six year-old, played caboose. The young mule learned how to keep her balance while hauling loads up and down mountains from her older counterparts.

“Harriet has the sweetest disposition of a mule I have ever seen,” TenEyck said. “She loves people.”

TenEyck and Skobel would wake early each morning to water and feed the mules before packing up. Hikers and backpackers often passed as the men weighed the animals’ panniers, eventually lifting the 80-pound loads onto either side of the mules’ saddles. The panniers must be within one pound of each other to balance the haul weight.

TenEyck and Skobel would often pass the same hikers later in the day, as they covered about three miles of trail per hour, a bit faster than many hikers.

Days were spent moving along forested stretches of trail, some of which were too narrow for the pack animals wide loads. At points, TenEyck and Skobel were forced to lead the pack string off trail to avoid fallen trees or other obstructions. On Kenosha Pass, where the terrain was too steep to circumnavigate the trail, the men had to saw through dead trees to create an opening for the animals.

And though highway crossings are often tough obstacles for mules, the group lucked out, crossing U.S. 285 at Kenosha Pass, and Colo. 9 in Summit County and Colo. 91 at Copper Mountain without incidence.

“You can’t really stop because they instantly get in trouble,” TenEyck said of the mules. Sometimes, however, stops are a necessity, like the time a Breckenridge local who lives just off the Colorado Trail offered them cold beers.

Another challenge was finding campsites that fit the needs of both humans and mules.

Most nights, TenEyck and Skobel found campsites where they could set up a portable electric fence. This allowed the mules to drink, forage and roll in the dirt at their pleasure. Though the compressed hay cubes contain enough calories for the mules for eight days, TenEyck said, the animals are happier when they are able to graze for supplemental snacks.

One night, the men selected a campsite without access to forage feeding. They set a highline up between two trees and tied the mules to it. Bridger, Bella, Nellie, Judie and Harriet spent the night pawing the ground, fighting with each other and making sure TenEyck and Skobel didn’t get any sleep.

One day, TenEyck will finish the entirety of the Colorado Trail with equines. When that day comes, he will pack lighter, leaving the fold-up chairs, lantern and varying amounts of human food at home.

“I have a better understanding of how much physical effort is required in this type of travel,” TenEyck, who lost 10 pounds in the eight day trip, explained. “It was physically demanding but emotionally rewarding.”

“When your focus is just on your immediate survival each day, you let go of all the unimportant things,” TenEyck added. “We never talked about politics or the pandemic — we talked about what we were doing right then and there.”