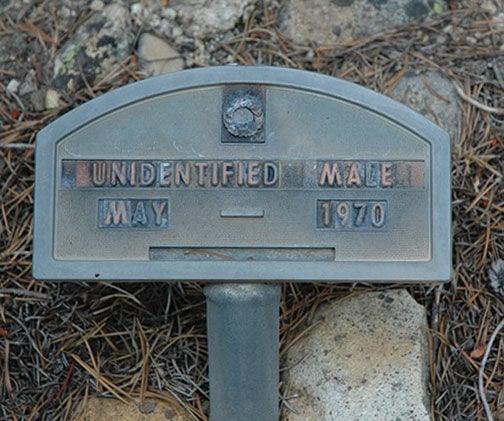 This is the grave marker at Evergreen Cemetery that marks the final resting place of an unidentified man whose body was discovered on Independence Pass in 1970. Although the body currently is at Bailey-Kent Funeral Home in Leadville, it will soon be returned to this grave. 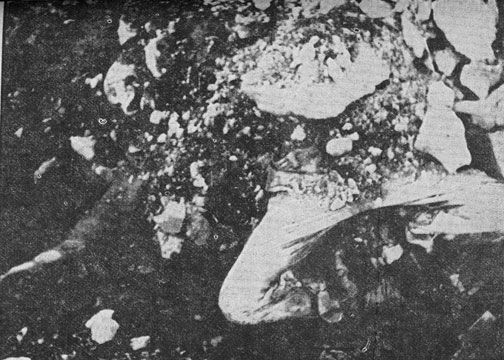 This photo appeared in the Herald Democrat when the unidentified John Doe was discovered on Independence Pass. The body is partially covered with falling rocks.

This is the grave marker at Evergreen Cemetery that marks the final resting place of an unidentified man whose body was discovered on Independence Pass in 1970. Although the body currently is at Bailey-Kent Funeral Home in Leadville, it will soon be returned to this grave.

This photo appeared in the Herald Democrat when the unidentified John Doe was discovered on Independence Pass. The body is partially covered with falling rocks.

Two young men walking east from the summit of Independence Pass on June 19, 1970, discovered the decomposed body of a white male lying in a ditch on the north side of the road about 2 miles from the top of the pass. It was partially covered with rocks that had fallen from the slope above.

There was no identification on the body, and to this day, the Independence Pass John Doe remains nameless. Yet it is more likely now than ever before that his family might be found, thanks to DNA.

According to a story in the June 22, 1970, Herald Democrat, the Lake County Sheriff’s Office said the body appeared to be that of a person in his early 20s, 5’7” to 5’8” in height. The entire left arm and rib cage of the body was missing.

At the time the body was found, the Herald was told that perhaps the man was one armed.

Current Lake County Sheriff Rod Fenske said that his uncle, Don Hansen, was working for the sheriff’s department at that time and remembers finding the body. Hansen told Fenske that the officers at the time thought the arm and rib cage had been torn from the body by a snowplow. And Coroner Shannon Kent verified that the injury took place after death.

John Doe had expensive dental work, with gold and platinum fillings. So far this hasn’t helped identify the man although his dental records are on file and they also have been reviewed by an odontologist.

John Doe had dark hair. He was dressed in a tattered sweatshirt and grey trousers. He wore three pairs of socks and tennis or hiking shoes with an unworn sock over the left shoe. In his pockets were $7 and a razor. No identification was found, although the area was extensively searched by deputies, including Hansen, and members of the sheriff’s posse.

Initially there was some thought that the unidentified man could have been a Minneapolis man who had been missing from the Aspen area since taking off on a solitary skiing trip during the previous winter. The missing Aspen man was 45 years old and six feet tall, so it was determined that he was not the man. His body was discovered several weeks later.

On July 15, 1970, a state highway maintenance man found the missing portion of the body below the road on the switchback where the body was found.

The July 17, 1970, Herald Democrat reported that the body part appeared to have been chewed by an animal. The shoulder and arm were only bone, but the hand and wrist still had flesh on them. The plans were to send them to the FBI so fingerprints could be taken. It is unknown if this ever happened.

It also was reported that July that the body did not belong to a man from New York, missing from Aspen, as the man had been discovered alive.

Speculation at the time was that the body could belong to a man, age 41, who had worked at Climax in 1961 and 62. This did not come to anything.

Eventually the Independence Pass John Doe was buried in the Evergreen Cemetery with a metal marker saying “Unidentified Male, May 1970.” At the time of the burial, someone probably guessed that the man had been dead for a month or so, accounting for the May date.

John Piearson, the local man who has spent a dozen or so years cleaning up Evergreen Cemetery, noticed the marker when he cleared out an overgrown section of the cemetery next to the Old Catholic section. He became curious about the identity of the man buried there, thinking he might be a Vietnam veteran.

Piearson contacted Audrey Simkins, crime/intelligence analyst with the Colorado Bureau of Investigation. Simkins, in turn, contacted Silvia Pettem, who has some experience in identifying John and Jane Does.

(Pettem is the author of “Someone’s Daughter,” a book outlining her successful efforts in identifying a Jane Doe who was found murdered west of Boulder in April 1954, and “Cold Case Research: Resources for Unidentified, Missing and Cold Homicide Cases.”)

Pettem came to Leadville and met with Piearson in August 2011. They viewed the grave.

In April 2013, Simkins and Pettem returned to Leadville and met with Fenske. With his permission they searched through records in the records room but found nothing, she said. Fenske confirmed that the records of the case cannot be found.

Pettem then contacted Lake County Coroner Shannon Kent and instructed him on how to enter the Independence Pass John Doe in the NamUs database. Information about him can be found at https://identifyus.org/en/cases/10738.

In September 2013, the body was disinterred under Kent’s direction. Piearson was in attendance. Kent told the Herald that the remains were mostly skeletal, but had been well preserved by the embalming that had been done back in 1970.

Kent said he sent an index finger to the Colorado Bureau of Investigation, and a fingerprint was obtained.

He initially sent a femur from the body to the University of Northern Texas so that DNA could be extracted. The university is equipped for forensic testing, and it does so free of charge, Kent said. But in cases such as the Independence Pass John Doe, when foul play is not suspected, this can take time.

Mitochrondial DNA was successfully extracted from the femur. That’s the DNA that traces back the mother’s line.

Kent then sent the skull to the university so more complete DNA could be extracted. This has been done, but the skull has yet to be returned to Leadville.

In any case, there is now DNA to match the John Doe with any possible relatives.

At one point, Pettem became aware of a missing person who was AWOL from Fort Carson around the time the body was discovered. She forwarded the information to Simkins at CBI, but he was ruled out after comparing DNA with the man’s brother in New Jersey.

In 2015, Pettem forwarded a lead to the NamUs database about a missing man who had escaped from a Nebraska prison in the same time frame. This man was also excluded due to a DNA comparison.

Kent said there has been no talk about doing a facial reconstruction using the skull, but now would be the time to do it.

Pettem said that according to Evergreen Cemetery records in Lake County Public Library, there are 41 graves of people listed as unknown in the cemetery. Most are in unmarked graves in the Protestant Free Section. The only two marked graves are the Independence Pass John Doe and a man from 1958. She believes it is still possible for a member of John Doe’s family to be alive and missing him.

NamUs actually consists of two databases, one for unidentified persons and one for missing persons. It was established by the National Institute of Justice and provides free testing of unidentified remains and sample kits to help identify possible family members. Anyone with information about a missing family member who could be Independence Pass John Doe can contact NamUs or Kent in Leadville at 719-486-1441.