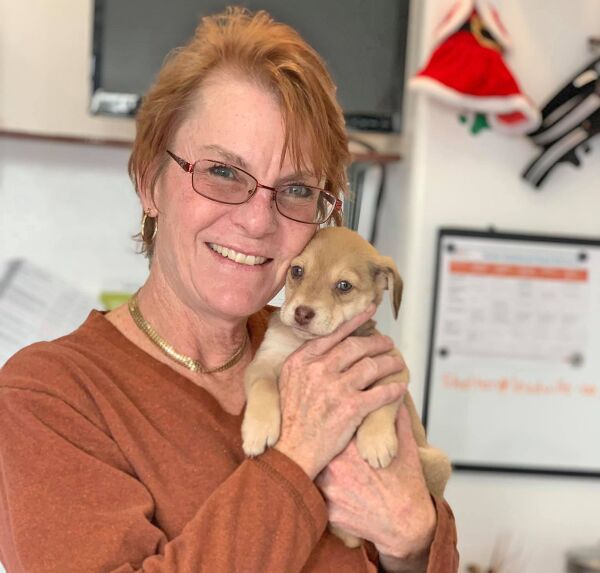 Leadville local Grace Smith-Sodic holds her puppy, Cocoa Latte, whom she adopted from the Leadville/Lake County Animal Shelter in November. 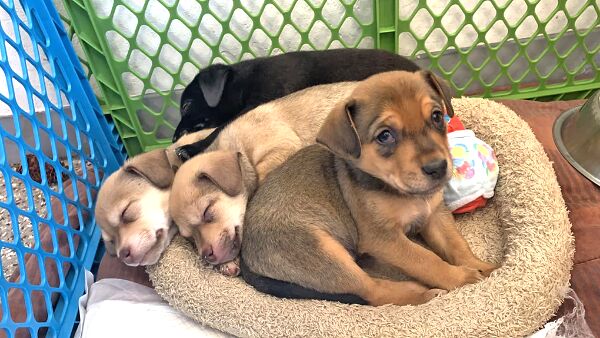 A group of puppies huddle together at the Leadville/Lake County Animal Shelter in early November, all of which were adopted during the shelter’s Puppy Palooza event. Roughly 30 people from throughout the state participated in the adoption event.

Leadville local Grace Smith-Sodic holds her puppy, Cocoa Latte, whom she adopted from the Leadville/Lake County Animal Shelter in November.

A group of puppies huddle together at the Leadville/Lake County Animal Shelter in early November, all of which were adopted during the shelter’s Puppy Palooza event. Roughly 30 people from throughout the state participated in the adoption event.

Since Caitlin Kuczko began running the Leadville/Lake County Animal Shelter a year ago, the senior manager has implemented a number of changes, including building renovations, enrichment routines for animals and adoption programs that have bolstered community participation in the shelter.

Earlier last month, the Leadville/Lake County Animal Shelter (LLCAS) was alive with the soft yips of puppies as community members participated in Puppy Palooza, an adoption event that saw 30 participants from throughout the state. Just weeks later, most of the puppies were adopted, ushering in a new generation of young dogs throughout Lake County.

Kuczko, who has a background working for the American Society for the Prevention of Cruelty to Animals, said Puppy Palooza was one of the first events of its kind for LLCAS, and showcased a new adoption strategy for the shelter. In the past, LLCAS has had fewer animals, which leads to low participation rates and infrequent adoptions. But a new transfer program that sources animals from out of state is supporting events like Puppy Palooza.

In October, Kuczko and LLCAS Assistant Manager Brenda Caraveo traveled to New Mexico to visit shelters that were struggling with capacity. According to the Animal Legal Defense Fund, while Colorado ranks in the top tier for animal welfare, New Mexico, just hours south, is considered bottom tier, which has led to crowded shelters throughout the state.

Kuczko and Caraveo visited three shelters that day, including the Farmington Animal Shelter, the Aztec Animal Shelter and the Roswell Humane Society, and brought home several dogs, some of which were scheduled for euthanasia. Candy and Mini, whose puppies were adopted at Puppy Palooza, are still available at LLCAS.

“We’re trying to move away from the image of a sad dog pound,” said Kuczko. “With the transfer programs, we have a chance to rescue animals from bad situations while helping out shelters that are overrun. Also, it gets the community excited and engaged in their local shelter.”

LCAS has also begun new enrichment routines intended to keep dogs active and healthy. The routines include daily activities, like scent training and time for socializing around town. Kuczko said LCAS is also rolling out a similar program for cats, thanks to a partnership with The Jackson Galaxy Project, a program through Greater Good Charities meant to improve cat adoptability.

LCAS was accepted into The Jackson Galaxy Project’s Cat Pawsite program in early November. The program, which has led to more than 1,800 cat adoptions throughout the country, is designed to help people train cats both in shelters and at home. More than 192 shelters throughout the nation have engaged with the program, which utilizes reward-based training and high-five exercises so that cats can better interact with adopters.

Kuczko said shelter employees and volunteers can participate in the program, which begins on Jan. 5 with a series of virtual classes. Those interested in volunteering for the program must sign up with LCAS before Dec. 15. Participation information is available through LCAS’s Facebook page and website. “We know there is a strong cat community in Leadville and Lake County,” said Kuczko, “so we’re really excited to start this program.”

LCAS has also undergone a series of building renovations to accommodate some of the shelter’s new programming. A new floor that cost about $11,000 was installed earlier this year, and new kennels and more staffing have also contributed to the shelter’s growing budget. Kuczko is also speaking with Mayor Greg Labbe about a possible expansion for the shelter, for which there is about $30,000 reserved, according to Labbe.

Since Kuczko took over, LCAS’s budget has increased by about $18,000, mostly due to three part-time employees that Kuczko hired over the last year. The senior manager said the hires were essential and have contributed to the shelter’s cleanliness and increased programming. But Kuczko is concerned she will be unable to keep her part-time employees in 2022 because of budgetary restrictions. At Tuesday’s City Council meeting, Kuczko requested additional payroll funds for two kennel technicians.

Labbe said that while LCAS has become more expensive to manage, the cost may be worth what LCAS is offering the community. Caraveo, who has worked at the shelter intermittently for several years, said she has noticed improvements, particularly with community participation. She said multilingual signs and translation services at the shelter have also attracted more Latino adopters.

“We have to think about what we want the animal shelter to be,” said Labbe. “There’s no question that the shelter is an asset to our community.”