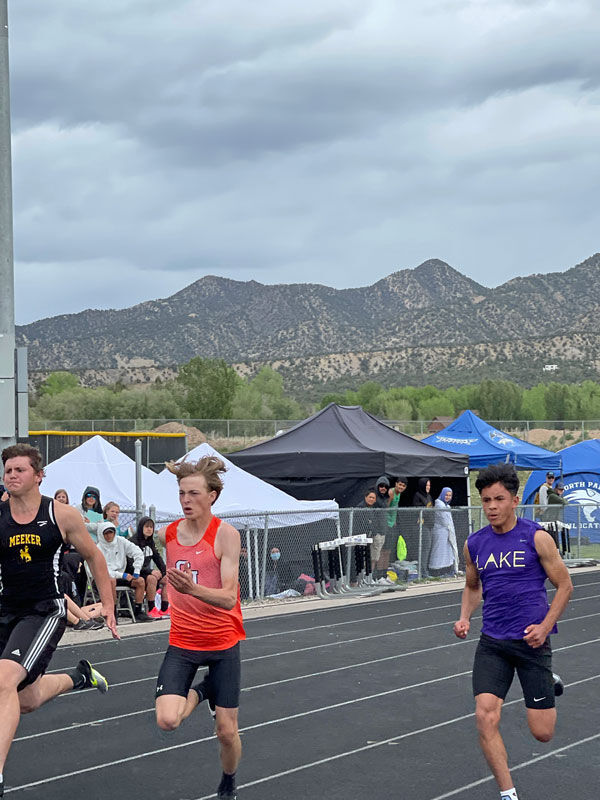 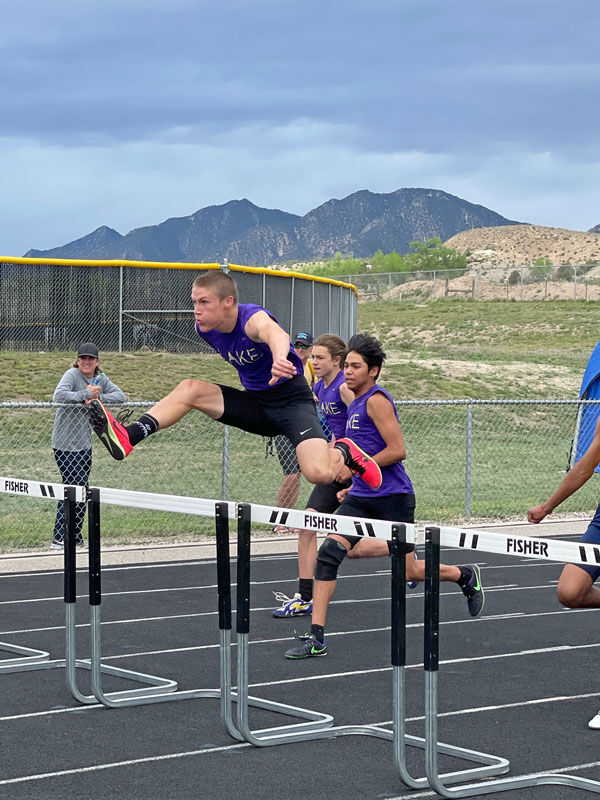 Jace Peters jumps a hurdle in the 110 meter hurdle competition. Obed Tarango and Eli Durand compete behind him.

Jace Peters jumps a hurdle in the 110 meter hurdle competition. Obed Tarango and Eli Durand compete behind him.

Last week was busy for Lake County High School’s track and field team. On Tuesday, May 18, the Panthers competed in the rain at the David S. D’Evelyn Invitational held at Jeffco Stadium in Lakewood.  On Friday, May 21, the team enjoyed the sunshine in New Castle at the Coal Ridge Invitational.

Anthony Martinez proved his ongoing dominance in the 110 meter hurdles by winning that race in both meets. His Friday time of 15.18 seconds was a personal best and only three-hundredths of a second away from the Lake County High School record. At the D’Evelyn Invite, Martinez finished third and fourth respectively in the 200 meter and 100 meter dashes with times of 23.42 and 11.59.

On Friday, Martinez placed second in the 200 meter (23.38) and fifth in the long jump with a distance of 19 feet, 11 inches. He also anchored the 4 x 200 meter relay with teammates Fabian Jimenez, Jace Peters and Javier Lazaro. Their time of one minute and 35.30 seconds was good enough to place second in the Coal Ridge Invitational and third overall in the 2A state rankings.

Despite facing off against 19 other teams at the Jeffco meet, many of them from larger schools, several other Panthers placed in the top eight of their events. Ivan Liewer reached 36’ 3” in the triple jump and finished second. Peters fell in the 300 meter hurdles and still managed to get up and cross the finish line in third place with a time of 46.21.  Jimenez took fifth in the 800 meter with a personal record (PR) of 2:08.  Ivan Hinojos achieved his own PR in the discus by throwing it 104’ 2,” enough for sixth place in that event.

On the ladies’ side, Aurora Marruffo finished the 300 meter hurdles in third place and a time of 57.29. She also leaped to a season-best 15’ 2.5” in the long jump and placed fourth. Keira King ran a steady 3,200 meter run, even though she had to run much of it by herself. She completed the two-mile race in 13:02 and sixth place. Jaycee Windorski cleared 4’ 8” in the high jump and took seventh place.

The women’s sprint medley relay team of Makayla Arellano, Kaytlin Sprague, Marruffo and Violet Hill finished in seventh with a season-best time of 2:09.

Lazaro, Obed Tarango, Cody Hall and James Garrison teamed up in the men’s 4 x 200 meter relay. They placed eighth with a time of 1:42.  Together Garrison, Tarango, Lazaro and Jimenez ran 3:55 in the 4 x 400 meter relay and placed eighth.

In the final results, the Panther boys placed eighth out of 20 teams and the ladies were tenth.

Windorski was the only individual girl to score points for the Panthers at Coal Ridge. She was sixth in the high jump with her clearance of 4’ 7.”

A few of the ladies’ relays placed in the top eight, though. Sprague, Arellano, Marruffo and Adele Horning comprised the sprint medley relay. They finished the 800 meter event in 2:13 and placed seventh. The 4 x 400 meter relay team of Hill, Sprague, King and Horning also took seventh with their time of 4:59. Sprague, Windorski, King and Marruffo teamed up for the 4 x 200 meter relay, finishing eighth in 2:00.

As a team, the men placed sixth out of 20 schools, and the women finished 17th.