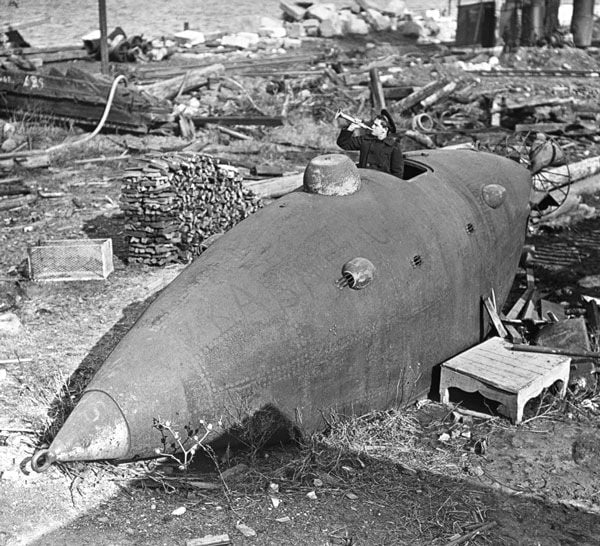 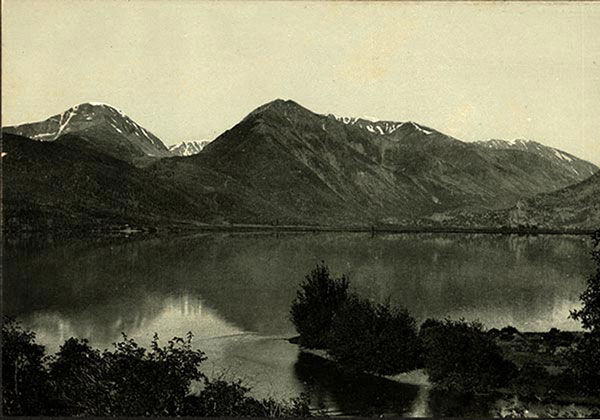 The surface of Twin Lakes lies placid at the feet of the snow-capped Rocky Mountains. It was on the shores of Twin Lakes that the Naiad was supposedly constructed and launched to explore the lakes’ mysterious depths.

The surface of Twin Lakes lies placid at the feet of the snow-capped Rocky Mountains. It was on the shores of Twin Lakes that the Naiad was supposedly constructed and launched to explore the lakes’ mysterious depths.

The plan we finally determined upon was not unlike that of the Intelligent Whale, the property of the United States government, and recently on exhibition at the Brooklyn Navy yard, except that we built it on a less ambitious scale, and with a few important differences. The Whale can be propelled in either direction; our boat could only go forward and was, it must be confessed, very difficult to propel and more difficult to turn when beneath the surface. We had no model by which to work and no books of reference pertinent to the subject. It was an experiment, to some extent a successful one, and the

CREDIT OF THE DESIGN

The boat, which we named the “Naiad,” was, as I remember, nineteen feet long and seven feet and five inches deep. It had a center and bilge keel and three tanks, one for compressed air, and two larger ones in the bottom of the boat for water by which to sink it. These tanks were filled by opening a valve and emptied by pumps.

I have spoken of it as difficult to propel. The fact is, it could not be propelled at all except on the surface by paddles or while sinking. In other words, launched from one side of the lake, it would go down at an angle of perhaps forty-five degrees, but when the water was expelled from the tanks would rise directly to the surface. We could then turn it by a steering apparatus which could be worked only from the outside and send it to the depths in a different direction. Or we could turn and fasten the rudder, sinking it along the shore, if I make myself plain, at the angle mentioned. We depended

FOR AIR TO BREATHE

upon that contained in the small tank first mentioned, and our apparatus was so incomplete that, when in the boat, we were compelled to keep in one cramped position, the air pipes which conveyed the element to us being immovable. In each side of the boat were fixed small panes of heavy plate glass, permitting but a limited and unsatisfactory view. The boat was completed in February, built and sheltered under a roof of light logs placed on heavy posts. It was largely of iron, the two large tanks being made of the boiler which we took to pieces, and the smaller tank put together in Denver according to order and brought by a freighter to Granite, from whence we hauled it. The frame was of wood, “pitched within and without,” the entire weight of the “Naiad” being probably fifteen hundred pounds. Long before it was finished the lakes were frozen over, and we were obliged to wait until the early part of April before making a trial trip. The day was a bright one, everything in complete order, and we launched the boat, which

the water tanks containing air which assisted its buoyancy. We entered and closed the hatch, or man-hole, used the air pump which could be operated from my position near the small talk, flooded the lower tanks with water, and with the rudder fixed to carry us directly out from shore, began to descend.

It was a strange sensation. We had no difficulty in breathing, but as the water rushed past the fragile glass, the only thing that separated us from certain death, it was difficult for me to restrain myself from emptying the water tanks. I suppose that on this first trip we must have gone down 500 or 600 feet. It took me some little time to accustom my eyes to the strange glare that the incandescent light in what we will call the cabin cast upon the water. It brought the fish to the glass in great numbers, many of them

There was one specimen which I observed narrowly, having made ichthyology something of a study. It had but one fin that appeared to the eye, a large one on its back, although there must have been others glued to its side. There was also a creature that I could not classify: one that was nearer a species of sword fish than anything else, with a sharp-looking tusk protruding from its snout, the length of the creature being about three feet. There were water snakes, which appeared under the lurid gleam of the light to be all sorts of fantastic colors, green predominating. We were in the depths about one hour, and when we arose to the surface found ourselves thoroughly exhausted by the excitement incident to the novelty of the expedition.

Two days later we took a second, and, as it proved, last trip in which the “Naiad” was to have part. We planned to explore the west shore of the lower lake as completely as possible, and accordingly before entering the boat

to carry us down to the north and not out into the lake. We sank not more than 500 feet. At say 200 feet below the surface was a cave in the rocky wall of the lake, in front of which I stopped the “Naiad.” It was of no great consequence, its mouth not being more than four or five feet in diameter, but as the boat almost touched the entrance, the light showed me bones of fishes without number scattered just within the opening of the cavern; huge skeletons, some of them, one of which, which seemed complete, not being an inch less than nine feet in length. It, and all of them, was completely barren of flesh. As we sank deeper, the walls seemed honey-combed with openings. I saw what I would have called a sea spider, had we been in the Atlantic;

a foot in length with innumerable legs that were constantly stretched out and withdrawn in their hunt for prey. We were 400 feet below the surface, I should judge, when we came to a yawning cavern from which came a current that caught and tossed our boat like it was an egg shell. The “Naiad” turned and whirled around, slowly at first, and then, seeming to gain impetus with each revolution, faster and faster, until I had no thought that we would escape alive. I pulled the lever to expel the air, but the boat seemed to pay no attention to the law which should have sent it to the surface. We went deeper and deeper until, as hope was indeed gone, we seemed to approach the edge of the stream, the force of the current lessened, and a moment later we commenced to ascend. To my mind the problem as to the source of the water was solved.

When we reached land I was so weak through awe and fright that I could scarcely walk. I

and whether or not I would ever have dared to make another submarine expedition is questionable. I did not have to decide.

That night we fastened the boat as usual to a substantial post on the shore, and when we went to look at it the next morning it had disappeared. The rope was broken, and fragments of the “Naiad,” some tarred planks and other woodwork of the boat, floated by the shore. The wooden keel, heavy as it was, we picked up in pieces, bit by bit as they drifted on the surface. What the destroyer was we never knew.”