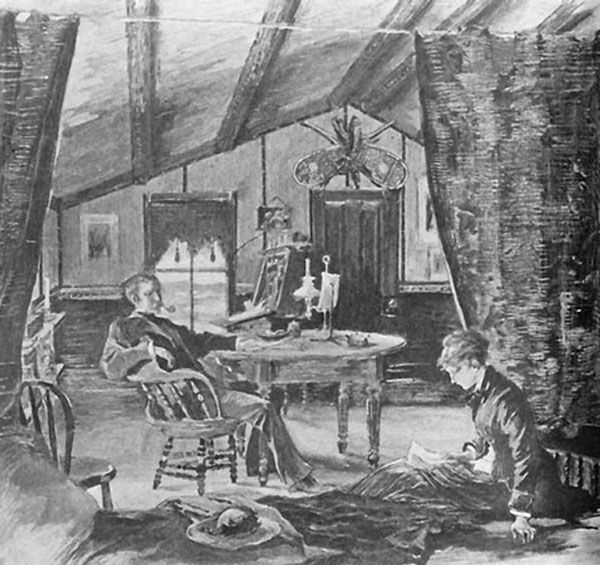 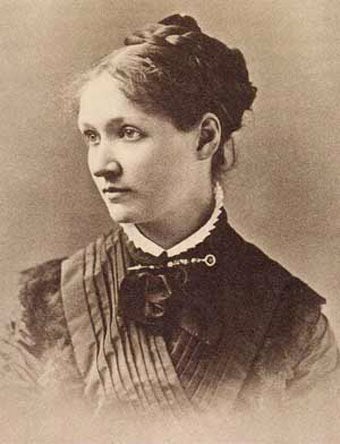 Mary Hallock Foote, or “Molly” as she was called, was a female writer and artist who lived in Leadville for just a few years but who wrote about the Cloud City numerous times.

Molly was born in 1847 in the state of New York. Raised by Quaker parents, she attended the Cooper Institute School for Design for women in New York City. This is where she met the woman who, some say, was the love of her life, Helena deKay Gilder. When finished with school, the two never lived in the same area, but through their letters, they stayed connected until Gilder’s death in 1916.

During the 1870s, Molly worked as an illustrator, providing drawings for Henry Wadsworth Longfellow, the Alcotts and Bret Harte. In 1872 she met Arthur De Wint Foote. Molly and Arthur finally married on Feb. 9, 1876.

She began writing about her experiences in the West where Arthur traveled to develop his career, first at the New Almaden Mine in California.

With the great interest in the West at that time, Molly’s writing proved popular, especially with Eastern readers. The family moved often: from San Jose, California, to Deadwood, South Dakota, to Leadville, where she arrived in the summer of 1879 when Leadville was experiencing its silver boom. They settled in a small cabin at 216 W. Eighth St., which at the time was considered outside the town.

Although Leadville was a wild town at that time — Molly was unable to go outdoors alone after dark — she enjoyed her time in the city. She and her husband made friends with and entertained the young mining engineers and their families in Leadville. One summer, the Foote family took a cabin at Twin Lakes where Molly enjoyed the wildflowers and the sunset over the mountains from a hammock on her cabin porch.

Although the Footes left Leadville in 1881, much of Molly’s writing was based upon her Leadville days.

The family experienced some hard times, and Molly became the chief breadwinner through her writing. They spent a dozen years in Boise, Idaho, which is where Molly finished her first novel, “The Led Horse Claim,” a romance set in Leadville that enhanced her popularity as a writer. Her husband struggled to stay employed, and in 1899 was finally offered a permanent position in California.

Molly and Arthur would live into the 1930s (she died June 25, 1938), eventually enjoying greater financial security. Molly finally turned to writing her memoirs although they were not published for many years.

She and her family returned to the limelight in Wallace Stegner’s Pulitzer-Prize winning book, “Angle of Repose,” which was based in part on Mary Hallock Foote’s letters and published in 1972. Although he had received permission to use them, Stegner’s use of Foote’s letters remains controversial in the literary world.

Picture of a Miner’s Burial.

Was it Leadville in the Early Tumultuous Times?

The unique story of “The Led Horse Claim,” by Mrs. Mary Hallock Foote, now appearing in the Century Magazine, is commonly supposed to be founded upon incidents of the early times of this camp. “Led Horse” is assumed to be only a thin disguise for “Stray Horse.” The installment of the February number contains a graphic description of a miner’s funeral. The deceased had fallen in an underground battle over some ore claimed by the managers of a rival mine. Possibly some of our readers may be able to recall the funeral and recognize some of the characters mentioned. Mrs. Foote is said to have spent some time in the camp in the first and tumultuous days, and ought to be able to present a truthful picture of its life at that time. How well she succeeds may be judged from the following description of the funeral of the slain miner:

“The more picturesque portion of the population of the camp was ready to say ‘poor fellow’ in the general consciousness that the compassionate epithet might eventually apply nearer home. Of such frail clay were they themselves fashioned.

“A delay, inexplicable to Conrath’s friends, in the reply to the telegram to his father roused a good deal of feeling among them. It was hastily assumed that Conrath’s family had ‘gone back’ on him. The facts of the case were that when the telegram reached New York, his father was on shipboard between that city and Havana, where his wife had been ordered by her physician to spend the winter. The silence was certainly far from paternal. The camp was sensitive on the point of its relations with the East, especially in the event of death. Whatever their indifference or faithlessness to their eastern ties during life, the men of Conrath’s rank on the frontier confidently expected those ties to contract in the extreme moment and restore them to their early associations.

“Without waiting for the silence of Conrath’s father to be explained, the Shoshone partisans rose in wrathful championship of their insulted comrade and said:

“‘If they can’t bury him decently, damn him, we will bury him ourselves.’ The case of the living sister could wait on that of the dead brother.

“It was on this honorable errand Gashwiler had come, when he encountered Hilgard in the first strong agony of his bereavement.

“Gashwiler did not see Miss Conrath, but he had a long and exciting argument with Molly, who protested that her mistress should not be disturbed on this or other business. She had met Cecil in the passage after her parting from Hilgard, and, with a sure instinct, the girl had known that the hour of her young mistress’ extremity was come. She indignantly repudiated in her mistress’ name the offered honors of the dead.

“‘Wouldn’t you leave her even the body? Sue, she’ll never sit behind that hearse, trailing through the streets, along with the let of you, an’ your music, an’ your mil’t’ry! She’s not proud of his dyin’, that she’d want the whole camp to be throopin’ after ‘im. The lease ye can do is to leave him to her now!’

“But Molly could not prevail alone against the resolute sympathy of Conrath’s constituency. All she could do was to soften the proposition by a little merciful deception and present it as a decent, kindly offer to give the chief of the Shoshone appropriate burial at the hands of his fellow masons and comrades of the militia to which he had belonged. Cecil gave her helpless consent, with the condition that all the expense should be referred to her father. She was too far prostrated in body, as well as in spirit, to know more of the last scene in the tragedy of her life than such dreary echoes as penetrated the darkened seclusion of her chamber.

“Conrath’s body was borne out of the house and conveyed to the camp, where it lay in state in the unfinished hall of the new Masonic temple to be gazed upon by the multitude. It was subsequently enshrined in a plumed hearse, drawn by eight horses fed on hay at $100 a ton. It was preceded by the regiment of militia keeping step through the miry snow of the street, with gans reversed to the measures of the Dead march. The band which furnished the music was attached to one of the principal variety theatres, and, in the interval of its regular performances, was often required to assist at funerals, where the camp publicly honored some favored actor in its social dramas on his exit from the stage. The Masonic society marched behind the hearse in full regalia, followed by the fire companies and the populace. The latter had turned out promiscuously on foot, or mounted on ‘livery horses’ of uncertain gait and temper, and might be relied on to appear at any point in the procession according to its caprice, joining the ranks of the Masons, the militia, or the firemen, and keeping up a current flow of conversation on topics more or less relevant to the occasion. The cortege moved on slowly along the principle streets of the town, and out through its straggling suburbs to the cemetery.

“The cemetery was a grim, untended spot, an acre of the primitive fir forest, sloping westward toward the valley and exposed to the winds that blew across from the snow-covered peaks. The fire and the ax had passed over the forest, and the nakedness of the land was left as the inheritance of that peaceful community which had pitched its tents on the bleak slope. A few stumps and dark, blackened pine trunks, a few young, slight trees, the sole mourners of the forest, supplemented the scant memorials raised to the human dead. Unpainted boards marked alike the graves of those who awaited at the hands of distant friends removal to a more permanent resting place, the graves of the poor and the unknown, and the graves of those whose place of rest was of less importance to the general public than its finality. The camp graveyard, like the camp itself, was peripatetic. The city was at that time reserving the money it might have spent on its adornment in contemplation of its removal to another spot.

“The heavy, soft snow had sunk and melted under the high glare of the sun and lay in patches, like linen spread to bleach, offering a grotesque, irreverent suggestion that the dwellers in those sunken mounds might have risen in the night and washed their earth-stained cerements in readiness for the pending order to ‘move camp.’ The funeral procession invading this desolate inclosure took nothing from its haggard loneliness. It was impossible to associate the place with human love and reverence, or even with humanity’s last enduring rest.

“Conrath’s body was lowered into the alien soil. His final allotment of it was small, and was grudged by none. Here no locator encroached upon his neighbor’s claim, and the original boundary lines were kept inviolate. A brief stillness fell upon the multitude, disunited as the stones of a river bed, except in the wave of sentiment which had brought them there; and then the words were spoken, of a common humility and a common hope.

“The militia company, drawn up by the side of the grave, fired a volley over it. The second volley scattered badly, and the crowd, recovering from its momentary reflectiveness, echoed the failure with jeers of derision. The mounted mourners had come exalted during the ceremonies to a pitch of solemn enthusiasm, which could only vent itself in the racing of their horses back to the camp, and the militia company reported at its captain’s headquarters before nightfall and drank to Conrath’s repose [from] a keg of whisky opened for the purpose.”