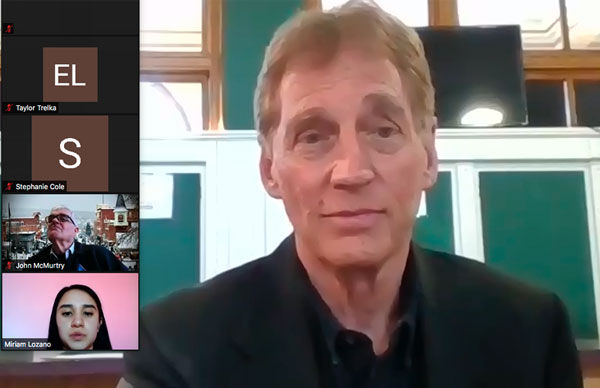 Mayor Greg Labbe welcomes viewers to the annual State of the Community event, which was held virtually this year. 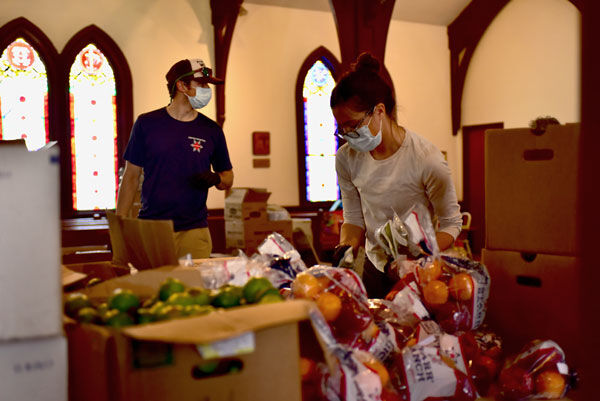 Mayor Greg Labbe welcomes viewers to the annual State of the Community event, which was held virtually this year.

“Tonight, we recognize the people and organizations who had no choice but to step up in 2020 and make a difference,” said Mayor Greg Labbe at the beginning of the event. “The way this community organized in a response to last year’s events is no less than incredible.”

Before presentations began, awards were given to Lake County Public Health Agency Director Colleen Nielson and members of the Unmet Needs Committee, which formed during the pandemic to provide economic relief to families in Lake County. The committee’s members include Gloria Perez, Eudelia Contreras, Cailee Hamm, Karla Alder and Janeen McGee.

Although much of 2020 was dominated by national headlines of business closures and evictions, the State of the Community revealed that there was not one eviction in Lake County during the pandemic and that many of Leadville’s business remained open.

The mayor also noted that Leadville has received national attention for its response to the pandemic. About six weeks ago, Labbe was contacted by Senator Michael Bennet’s Office to discuss Leadville’s pandemic response tactics. Bennet assured Labbe at a later meeting that Leadville was doing something right.

Highlights from Friday’s presentations are as follows:

Vice President and Campus Dean Rachel Pokrandt said that enrollment at Colorado Mountain College (CMC) fell only four percent during the pandemic, compared to other Colorado schools where enrollment dropped by 20 to 30 percent.

Pokrandt then said that 69 percent of students at CMC maintain jobs in Leadville and Lake County while going to school, meaning they were a significant part of the area’s workforce during the pandemic. Pokrandt also shared several student profiles.

In 2020, the Leadville/Lake County Economic Development Corporation reached 98 businesses with 160 grants for a total of over $440,000 in economic relief aid. Only four businesses closed due to the pandemic in Lake County.

Since the pandemic began, Get Outdoors Leadville! (GOL!) has logged more than 50,000 outdoor hours with almost 2,000 different kids in Lake County.

GOL! also introduced its new director Venessa Saldivar, who will start later this month. The organization also revealed that its new gear library on CMC’s campus will open next weekend.

The committee, now housed within Full Circle of Lake County, formed at the start of the pandemic to provide economic relief to families impacted by COVID-19.

Since then, the Unmet Needs Committee has approved almost $700,000 in relief to 622 households in Lake County, and has prevented evictions by helping families pay rent. The committee also works to connect households, particularly those with children, to further resources.

“That was a very real threat for communities in Lake County,” said Perez. “Thankfully nothing happened, but we were prepared for the worst.”

Lideres Latinos is now a resource for immigrants in Lake County and is working to transform parts of Leadville to be more accommodating to immigrant populations.

In 2020, LCCF awarded $56,000 to 13 nonprofits in Lake County through a series of grants. Additionally, more than $390,000 was raised for LCCF’s disaster relief fund, which went toward helping 374 households pay rent and utilities during the pandemic.

“This has been the story of my career to see this happen,” said LCCF Executive Director John McMurtry.

LCBAG helped coordinate several relief efforts during the pandemic, including the facilitation of several landlord negotiations to avoid eviction.

Baldassar also revealed an update on the nonprofit’s Childcare Coalition, which launched last Friday after a planning session in February. The organization is also working to develop a mobile food pantry that would run out of a renovated school bus.

In March 2020, the food pantry that has long been run out of St. George’s Episcopal Church ran out of food.

In response, the church partnered with Cloud City Conservation Center (C4) with the mission that no person in Lake County would go hungry during the pandemic. C4 Executive Director Emily Olsen said volunteers transported almost all of C4’s garden to the church the day it ran out of food.