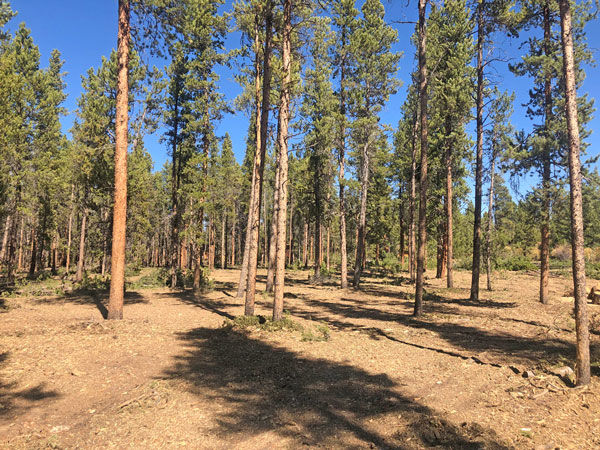 A stand of lodgepole pine behind the High Mountain Institute (HMI) in Leadville represents forest thinning coordinated by the Arkansas River Watershed Collaborative. HMI is using downed timber from the project to heat cabins with wood stoves. 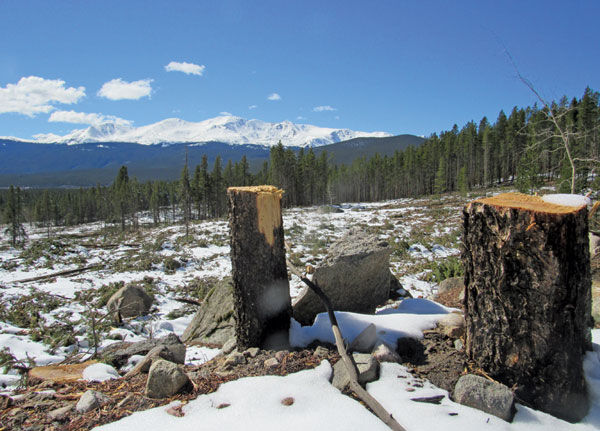 A plot of land along C.R. 4 near Turquoise Lake represents the initial phase of the Tennessee Creek Project, a U.S. Forest Service fuels mitigation effort that began in 2018. 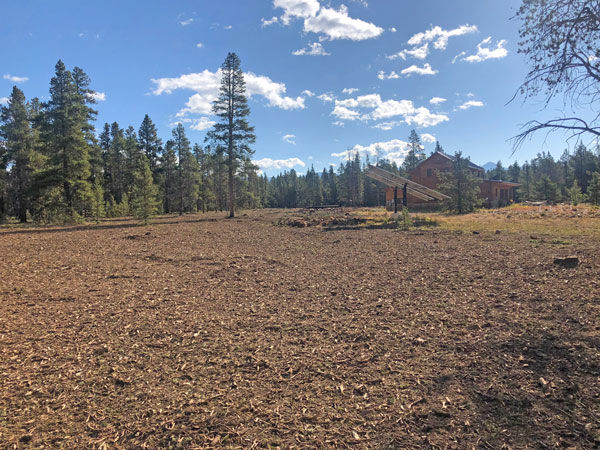 A forest treatment project near the High Mountain Institute creates defensible space around a structure, mitigating the impact of a potential wildfire.

A stand of lodgepole pine behind the High Mountain Institute (HMI) in Leadville represents forest thinning coordinated by the Arkansas River Watershed Collaborative. HMI is using downed timber from the project to heat cabins with wood stoves.

A plot of land along C.R. 4 near Turquoise Lake represents the initial phase of the Tennessee Creek Project, a U.S. Forest Service fuels mitigation effort that began in 2018.

A forest treatment project near the High Mountain Institute creates defensible space around a structure, mitigating the impact of a potential wildfire.

As wildfires throughout the American West  continue to rage with each passing fire season, several organizations are partnering to protect Lake County’s built and natural assets. From forest thinning on public lands to educational campaigns regarding fuels mitigation and emergency preparedness, local leaders are adamant that now is the time to implement projects that protect against wildfire.

Such projects range from the Tennessee Creek Project, an ongoing forest thinning effort conducted by the U.S. Forest Service near Turquoise Lake, to the rollout of Lake County’s Community Wildfire Protection Plan, which will identify forested lands in need of future treatment. But wildfire mitigation extends beyond forest treatment to include private lands and less intensive efforts than thinning thousands of acres of forest.

In the final installment of “Our Forests,” the Herald investigates what mitigation projects are underway in Lake County and what is to come in the future, as well as what homeowners can do to mitigate their own property and how to respond in the event of an emergency.

As one of the largest forest thinning efforts of public land in Lake County, the Tennessee Creek Project near Turquoise Lake, which is conducted by contractors with the U.S. Forest Service (USFS), has been ongoing since 2018 and is slated for completion by 2023. So far, only about ten percent of the project has been completed, or roughly 1,000 acres of the 13,000 originally identified for treatment.

Mercer said that forest treatment is done in a number of ways and depends on the types of trees that grow in a treatment area. Before treatment begins, extenisve land surveys are conducted, accounting for tree types, slope of land and other landscape features. Then, trees are tagged. For lands where lodgepole pine grows, like the area near Turquoise Lake, thinning often involves large areas of clear cutting because the tree stands are dense and more susceptible to high winds when patch cut.

After a harvest, which is typically done using machinery, piles of fuels are either burned during the winter or sold to locals as firewood. Mercer said that much of what crews harvested near Turquoise Lake is unmarketable, meaning that the timber, which consists mostly of lodgepole pine, is not suitable for lumber. In accordance with the National Forest Management Act of 1976, USFS is then required to ensure an adequate number of seedlings have regenerated.

According to Mercer, regeneration is progressing well throughout the treated areas near Turquoise Lake and is on track to meet a requirement that 200 trees regenerate per acre in seven years. Mercer added that typically a silviculturist, or tree forester, conducts an informal walk through of treated areas three years after treatment, meaning that areas treated in 2018 were up for review this summer.

During this year’s review of treated land near the Maid of Erin campground, a silviculturist with the Leaville Ranger District reported that 102 acres would currently meet the seven-year requirement, with 11 more acres reporting moderate regeneration. A formal review of the treated land will be conducted in 2023. If any lands don’t meet the requirement, seeds stored at the Charles E. Bessey Tree Nursery in Nebraska will be planted.

In addition to the Tennessee Creek Project, USFS is also planning a thinning project near Twin Lakes. Although the project is still in the early phases of implementation, Mercer said he hopes to reach a project decision by next summer. Currently, field workers with USFS are informally surveying roughly 3,000 acres of land near Twin Lakes to determine the best path forward.

But while USFS works to mitigate public lands, other groups, such as the Arkansas River Watershed Collaborative (ARWC), are helping private land owners protect their properties using similar mitigation tactics.

ARWC Lead Forester Andy Lerch, who has led mitigation efforts at the High Mountain Institue in Leadville and along Monarch Pass, is planning a project near Grand West Village Resort and Mountain View Village along U.S. 24 north of Leadville. Over the summer, Lerch said he received a number of calls from Dan Dailey, chief of Leadville/Lake County Fire-Rescue, stating that several minor fire incidents had occurred in the area.

Lerch added that manufactured home parks such as Mountain View Village are particularly susceptible to wildfires because the homes are close together and often not built with fire proof materials. To mitigate the potential impacts of fire in the area, ARWC is planning a thinning project that Lerch hopes to begin next year. The project, which is largely funded by grants through the state and federal government, will focus on creating more defensible space for Grand West Village Resort and Mountain View Village.

According to Lerch, many property owners throughout Lake County, particularly those in the backcountry with equipment like chainsaws, are capable of mitigating their own property, which includes cutting hazardous tree limbs or removing vegetation that’s close to a structure. The problem lies with where to dispose of leftover slash. Sometimes

residents are uncomfortable with burning slash near their homes, and  stockpiling slash only adds to a property’s fuel loads.

To address this issue of slash management, the Board of County Commissioners (BOCC) is purchasing an air burner in conjunction with Lake County Public Works & Maintenance. The burner, which will cost $165,000, resembles a large storage container. Air is circulated throughout the machine to burn slash more efficiently, producing a biochar, or ash, that can be used in gardening. Commissioner Sarah Mudge said the burner is a promising solution for slash removal in Lake County.

While the specifics of how slash collection will work in Lake County once the machine is purchased have not been worked out, Mudge said the machine can be transported. The commissioner alluded to the possibility of slash pickup days where the machine would be moved to nearby subdivisions to burn collected slash on site. Lake County residents could also bring their slash to the machine, as they would trash to the landfill.

Cloud City Conservation Center Executive Director Emily Olsen said she is exploring how the nonprofit organization could use the biochar. “As the county’s sustainability partner, we look forward to continuing to discuss how to address excess slash that may be created by wildfire mitigation,” Olsen said.

To demonstrate the forest thinning process and to improve the public perception of fuels mitigation, BOCC is working with ARWC to create a model mitigation site near Leadville. The project is intended to serve not only as an educational installment, but also a catalyst for future mitigation work along C.R. 4 and 9.

“We are trying to show that forest thinning can be aesthetically pleasing and can even enhance the beauty of a piece of land over the years by allowing more biodiversity and attracting wildlife,” Lerch explained.

The model mitigation site is slated for implementation on a five acre plot of land along C.R. 4, which the county owns. The plot, which is in need of thinning, will undergo treatment sometime next year, said Lerch. After treatment, interpretive signs will explain the mitigation process.

“It’s a great spot to look at and point to specific things that happen during treatment,” said Mudge. “Hopefully it will give people a better understanding of what we are trying to do.”

ARWC Chief Executive Officer Carol Ekarius said the organization has built similar model properties in other parts of Colorado, such as Woodland Park, where Ekarius said residents were offered a wholistic understanding of forest treatment.

“Leadville, in my opinion, is a vulnerable community for a fire coming right into town,” said Ekarius. “We are seeing high mountain areas burn in a way they never have. It really is a matter of when, not if. So the need to be proactive is huge.”