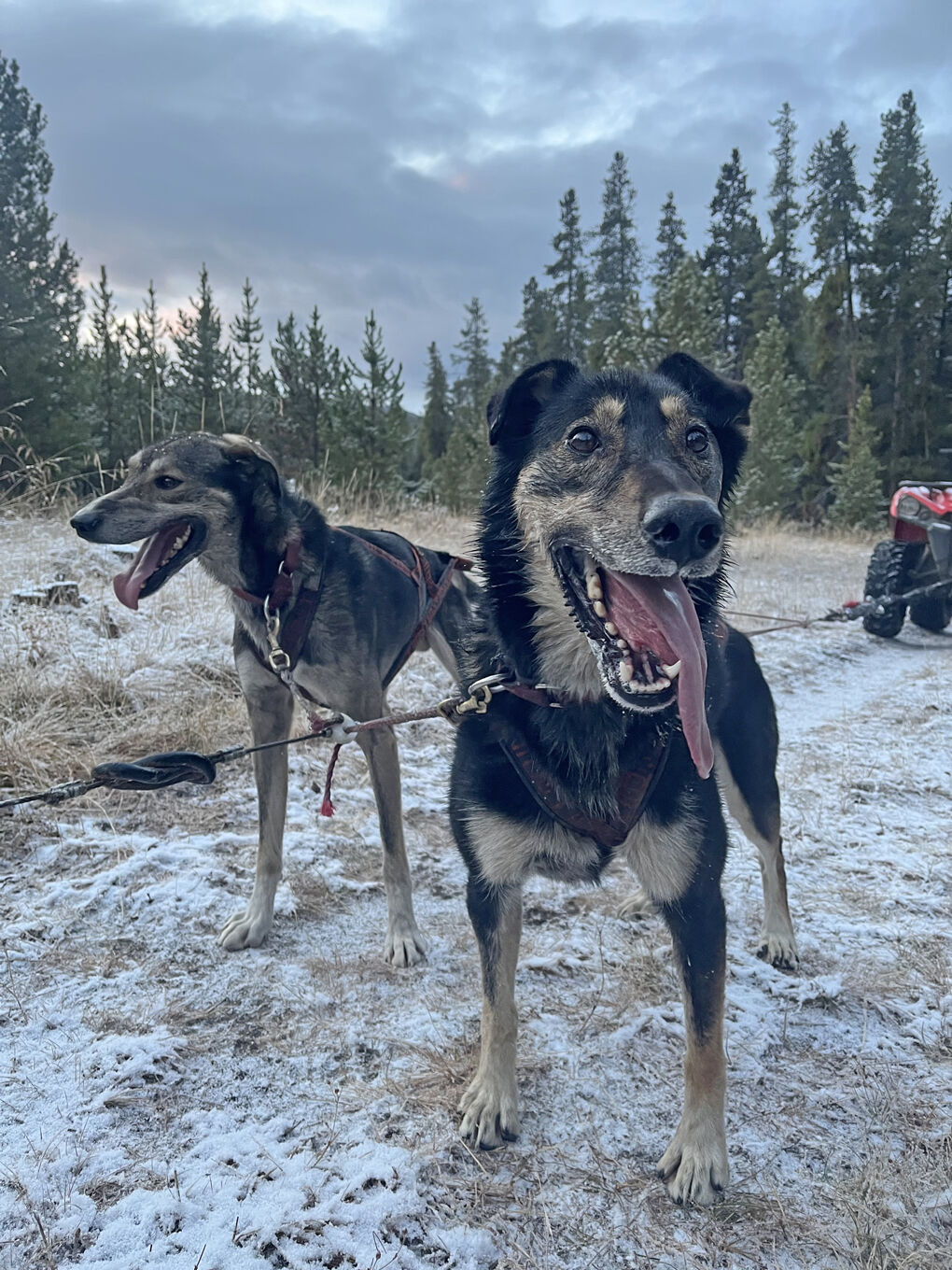 Borris and his partner Kerosene run wheel on a Mount Zion training run. The dogs are competing for a chance to run at the Pedigree Stage Stop Race in Jackson Hole, Wyoming this winter. 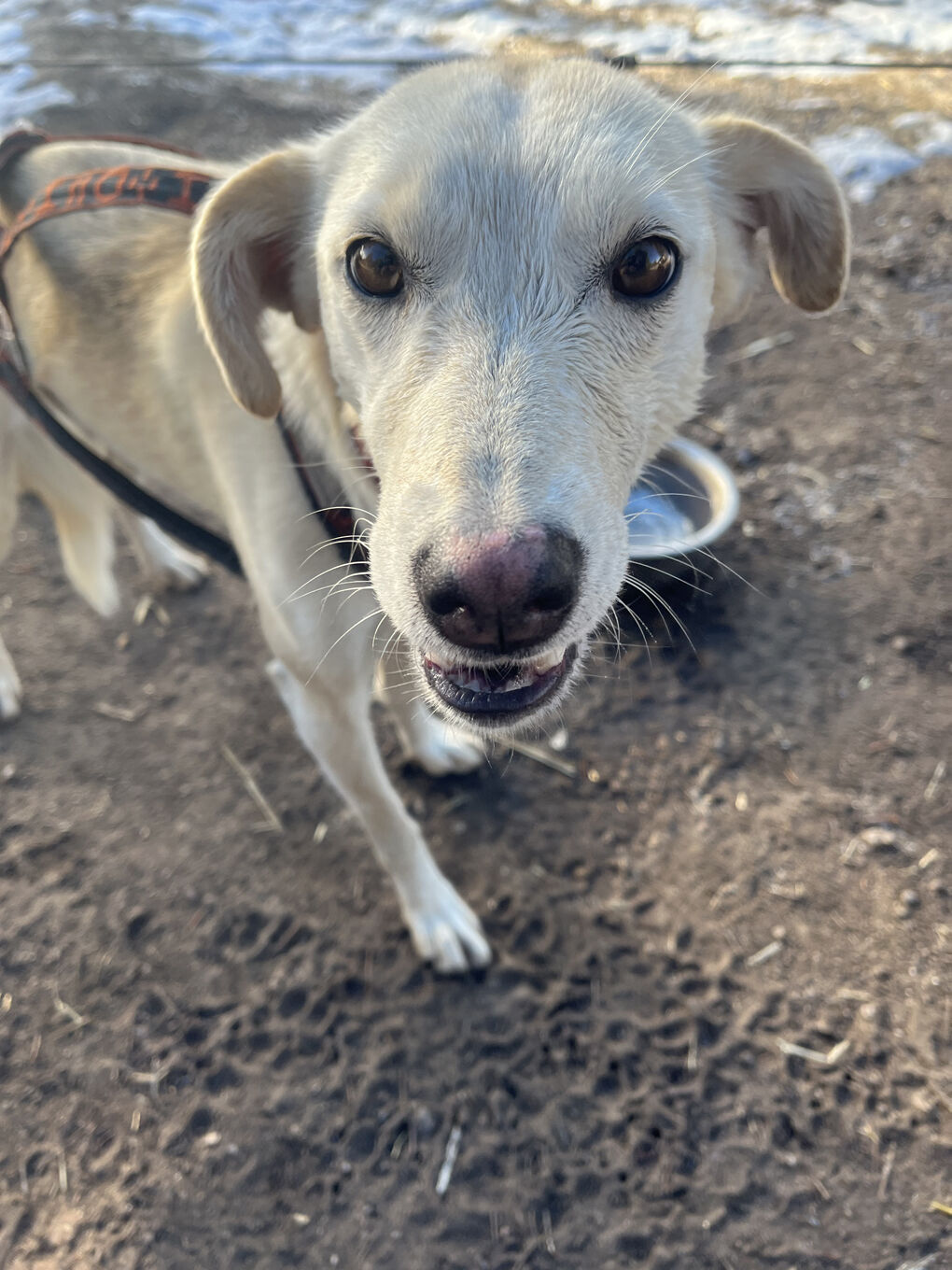 Lodi shows off her white fur with tan accents and her expressive brown eyes. 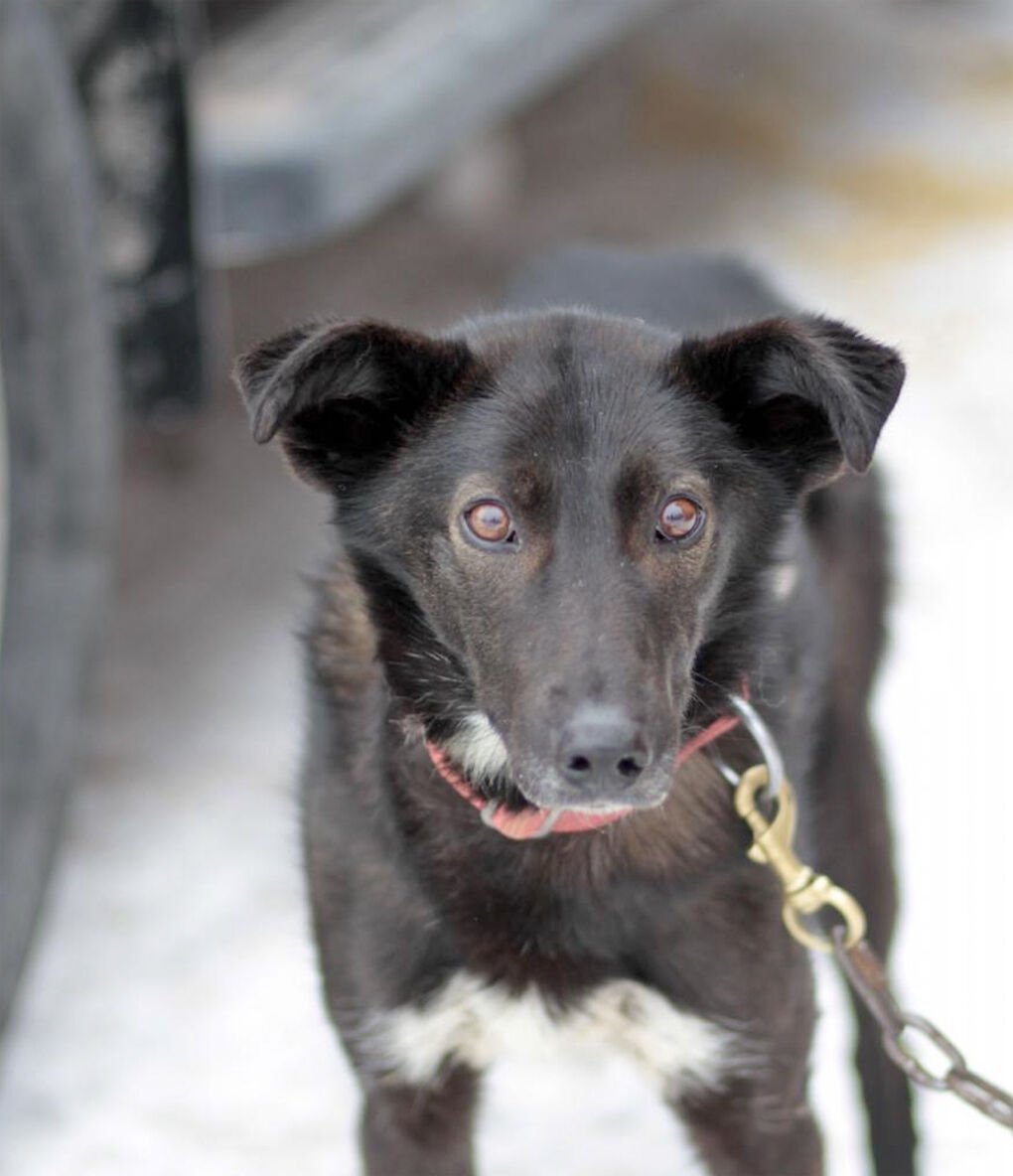 Mattie, a seven-year-old sled dog at Alpine Adventures, is calm and collected on the dropline, ready to lead the team. 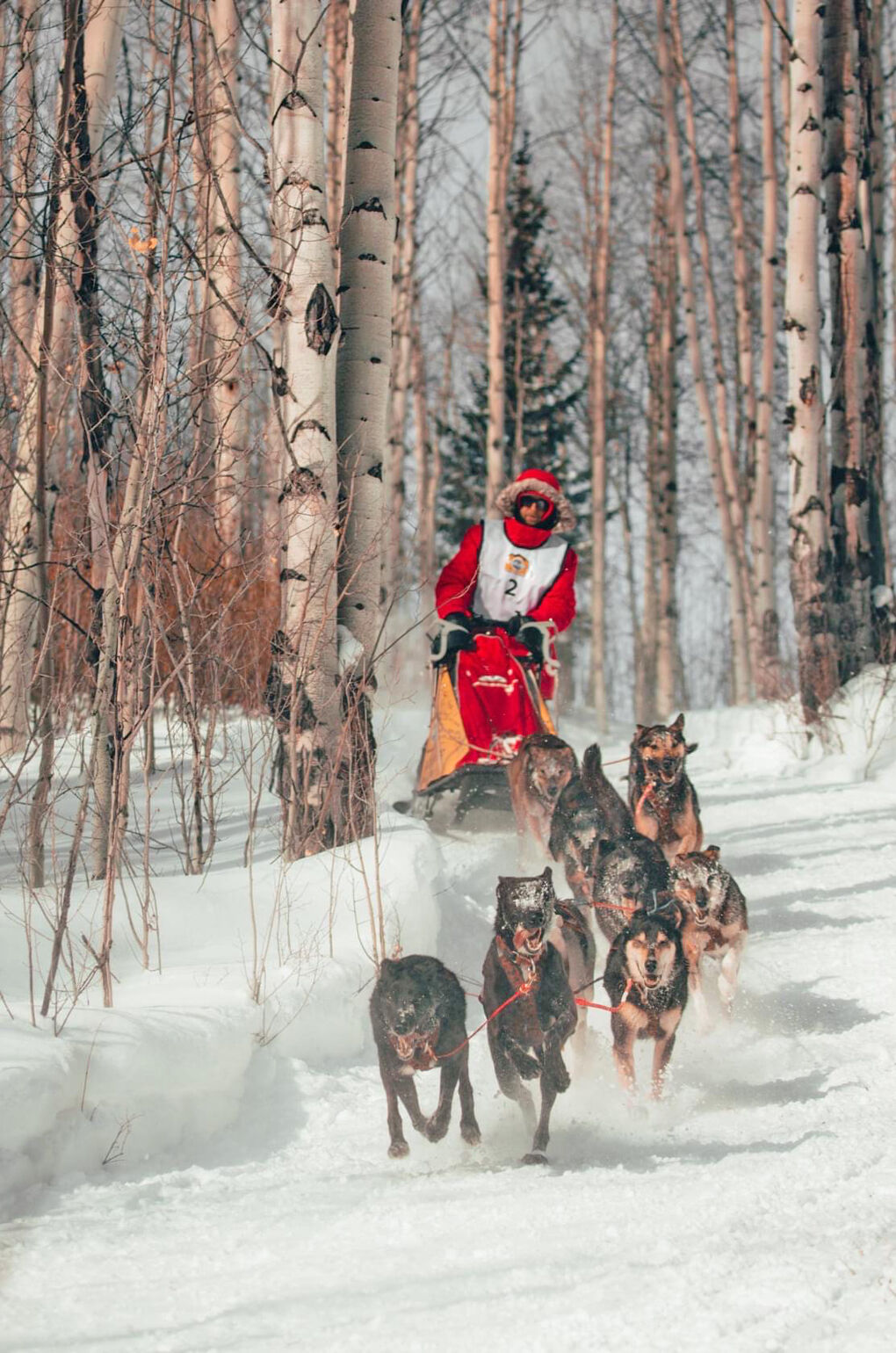 Borris and his partner Kerosene run wheel on a Mount Zion training run. The dogs are competing for a chance to run at the Pedigree Stage Stop Race in Jackson Hole, Wyoming this winter.

Lodi shows off her white fur with tan accents and her expressive brown eyes.

Mattie, a seven-year-old sled dog at Alpine Adventures, is calm and collected on the dropline, ready to lead the team.

Local sled dogs are competing for a chance to run at the 27th annual Pedigree Stage Stop Race in Jackson Hole, Wyoming this winter. The team will be driven by musher Austin Forney of Leadville.

The Pedigree Stage Stop Race is one of the most competitive dog sledding races in the world. The race is international, with 10 states and five provinces represented. There are 21 teams from the United States and nine from Canada. On the line is $165,000, the second highest purse in dog sledding after the Iditarod Trail Sled Dog Race in Alaska. The race is shorter but faster than the Iditarod, totaling 210 miles over the seven stages.

Borris is seeded as the number one dog on the race team, but even he will have to vie against the up-and-comers to secure his spot for this year’s race. He ran all seven stages last year, the only dog Forney has seen do so in his six years competing.

Borris has broad shoulders, muscular hind legs and a long snout. He has a curly brown mane that always seems to be molting. He has some bad habits: He can be a bully, and he loves to chew his neckline at stops when impatient to get going on a run.

Lodi weighs as much as three gallons of milk. If you saw her at her home, the Alpine Adventures kennel, you’d want to pick her up. At two years old, she is the embodiment of intelligence and agility. She’s white with tan accents and expressive brown eyes. She gets along charmingly with her teammates. It’s her first year trying out for a spot on the race team.

Borris and Lodi were neighbors this year at the summer kennel. They became fast friends, playing and chasing each other. They probably won’t run together as a pair: Lodi is a leader, driving at the front of the dog team, and Borris is primarily a wheel dog, closest to the sled and bearing the most weight. Both dogs display natural talent and hardcore drive.

Lodi is from the Creedence Clearwater Revival litter and is named after the song “Lodi.” Bred at Alpine Adventures, her parents, Arron and Chicka, are former racing sensations. “Watching Lodi develop as a leader is like seeing an oak tree growing roots,” Forney said. “She has the ‘It Factor’ — drive, heart, speed and brains. All the tools necessary to be a superstar.”

Borris came to the kennel by way of Jerry Bath from Lander, Wyoming, Forney’s biggest influence and mentor, who has since retired from mushing. Borris is five years old. He is also a new dad; he and mom Chilli are the parents of the six fuzzy puppies of The Black Crowes litter.

“Borris is happy, full of life, and loves being a sled dog. He’ll be your best friend in two seconds,” Forney said. His endurance and athleticism make him a force of nature. “He’s got the juice. Whenever, wherever, he is always ready to go. He is all heart and he will give you everything he has every practice, every day. The dogs see his effort and it raises the standard,” Forney said.

On the team’s first 12-mile run of the season, a path winding from East Tennessee Pass to Ski Cooper and back, along roots and rocks and up steep grades, the Alaskan huskies pulled a four-wheeler with Lodi and Mattie as the leaders. Amidst dozens of competing trails, Lodi and Mattie found the line across two creeks, around a horseshoe bowl that is a blind corner for the musher and against dramatic ridge lines, leading the 12 dogs through safely.

Lodi had never run the Ski Cooper loop, but she was able to help lead the team under the guidance of Mattie. It shows her ability to learn and adapt on the spot — a quick intelligence. Mattie is her mentor. She has quiet confidence, leading by example. She’s seven years old, the oldest dog on the team, yet its most radiant star.

At the dropline, Mattie knows how to run back to her home. She navigates her way between the houses and territorial dogs to arrive safely back at her corner. Her speed is evident as she cuts through the dawn light, a streak of black fur and the swish of a tail that curls up like a shepherd’s crook. She is experience and vision, a veteran setting the pace and showing Lodi the ropes.

Borris is not a mentor to other dogs. He is a rugged individualist, a bit of a loner. Both dogs have siblings competing for a spot on the race team.

Lodi’s brothers are Bootleg, a reserved but good-natured blonde dog that is one of the hardest workers on the team, Ooby, a sleek spotted dog with hound features who charges from point to wheel, and Creedence, who is speckled like a Jersey cow and exhibits nonstop energy. Her sister Suzie Q is another tiny operator, still finding her place among the team. Lodi is the only leader among her littermates. Borris’ siblings include Toshi and Seven, two sturdy females, who are versatile and determined. Both secured a spot for the last three races.

It was 20 degrees the morning the dog team would run Mount Zion, and the frost gave the landscape a hint of sparkle. Forney put on his gloves and protective eyewear and started up the four-wheeler. Borris ran at wheel with his partner Kerosene. The team would run 14.7 miles, with an elevation gain of 2,500 feet. This is preparation for the Pedigree race, where the minimum elevation gain of the seven stages is 2,000 feet and the largest elevation gain is 4,500 feet.

“We train in the mountains, we race in the mountains,” Forney explained. “Leadville has ideal weather conditions and terrain for training a dog team.” When snowfall comes, the team will move to Turquoise Lake to access 20 to 30-mile runs.

The trail winds up Mount Zion, providing technical and intense climbing for the dogs. The team is silent and focused, with Borris rocking forward, his tongue out, devoted to his task. His tugline is guitar string tight, a testament to his effort. As the other dogs settle into a trot up the steep incline, Borris teaches how to work. He is alive with purpose, full of spirit.

There are 26 dogs competing for 14 spots on the final roster. In late January, Forney and his support team will load his dog truck with gear and supplies, making the journey to Jackson Hole with the top dogs. It will be Forney’s seventh consecutive race. His team has been in the top 10 for three of those races. Every day is a tryout for varsity, and Lodi and Borris keep showing up ready to run.