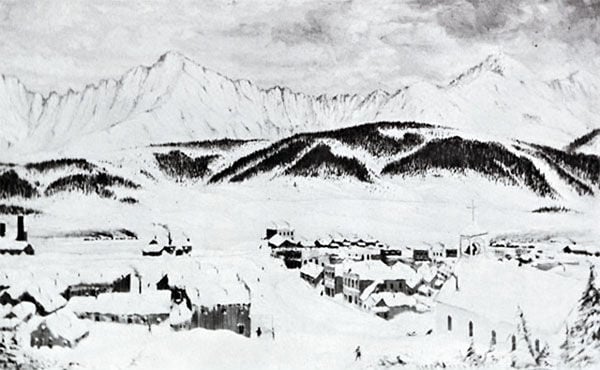 The town of Robinson sits peacefully beneath a blanket of snow in the early 1880s. 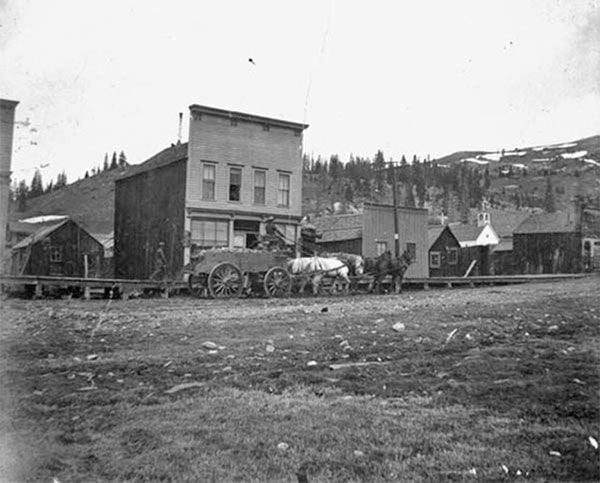 R. McDonell poses with a loaded horse-drawn ore wagon in front of one of Robinson’s many businesses. 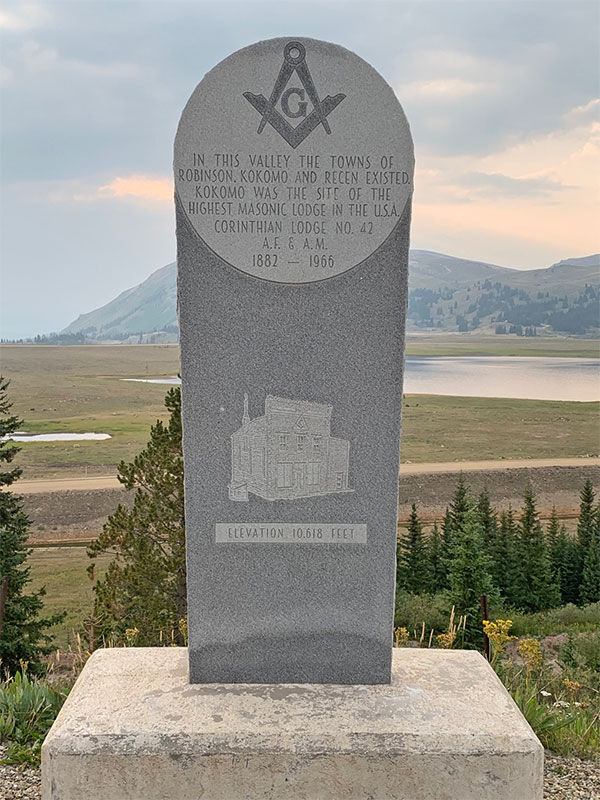 A marker stands along Colo. 91 memorializing the highest Masonic Lodge in the United States, and Robinson, Kokomo and Recen, three of the bygone boom towns of the Ten Mile district. The Robinson Tailings Pond is in the background.

The town of Robinson sits peacefully beneath a blanket of snow in the early 1880s.

R. McDonell poses with a loaded horse-drawn ore wagon in front of one of Robinson’s many businesses.

A marker stands along Colo. 91 memorializing the highest Masonic Lodge in the United States, and Robinson, Kokomo and Recen, three of the bygone boom towns of the Ten Mile district. The Robinson Tailings Pond is in the background.

The discovery of gold in the late nineteenth century drew hundreds of thousands of people in search of land and wealth west, disrupting the formerly pristine and picturesque high Rocky Mountains. The gold ran out quickly, but the siren call of silver, lead, zinc, copper, and all manner of other mineral wealth brought people of all ages.

Very few of the camps that sprung up around the hastily-constructed mines and mills had any staying power, burning bright and disappearing as quickly as they had materialized, existing today in name only. In this series, the Herald will chronicle the histories of some of the boom towns around Lake County and the Arkansas Valley. Some can still be visited today — some are even still occupied by more than the dead — while others are little more than a memory.

Robinson, sometimes also referred to as Camp Robinson, Robinson Camp, or Robinson’s Camp, was founded just months after Leadville began to take shape as a city. George B. Robinson, the namesake of the town, born January 28, 1848 in Gun Plains, Michigan, worked in a number of business houses, banks and local government offices there before moving west to find his fortune.

Robinson was on his way to San Francisco via Denver in February 1878, but was persuaded to deviate from his original plan and travel to Leadville instead. Robinson set up a successful grocery and soon became one of the biggest importers of goods into the city. Never one to be content with his successes, he rolled his accumulated wealth in Leadville into grubstaking prospectors.

George Robinson financed the excursion of Charles Jones and Jack Sheddon into the Ten Mile district, about 19 miles north of Leadville, for which Robinson was to receive half interest in each claim they staked. By February 1879, the Undine, Seventy-eight, Smuggler, Checkmate and Pirate Nos. 1 and 2 had been staked, and shortly after, rich veins of silver were discovered in both the Undine and Smuggler. “All experienced miners who have been inside the workings of the Undine and Smuggler unite in saying it is the most valuable mine in Colorado, if not in the United States,” the January 1, 1881 Leadville Daily Herald would later recall.

The Daily Chronicle first mentioned the little town of Robinson’s Camp on February 24, 1879. An informant for the Chronicle reported that the Ten Mile district, consisting of Robinson, Kokomo, Recen, and the very short-lived Carbonateville, had at least two thousand occupants already, with more arriving daily via wagon, horseback and on foot. Despite the snow, miners were hard at work, with new strikes being reported all the time.

Charles Jones, one of the original prospectors, died during the winter of 1878-79, and George Robinson quickly bought out Jones’ heirs, as well as Jones’ partner Jack Sheddon. Following his expeditious success, Robinson decided to devote more time to the development of the mines and their future prosperity. He brought in stockholders from the east coast, and the Robinson Consolidated Mining Company was created in the winter of 1879-80. With their financial contribution, Robinson was able to set up a smelter in the camp, saving both time and money in transporting the raw ore to Leadville via mule-drawn carts for processing.

Like so many of his contemporaries, though, Robinson’s good fortune soon ran out. By the end of 1880, tensions were on the rise in the camp, with miners, mine supervisors and lawmen all at odds. The ever-present fear of claim jumpers, alongside the occasional eruption of gun battles in the streets of the new town prompted George Robinson to contract heavily-armed security around the shafts, which ultimately led to his undoing.

On the evening of November 27, 1880, while walking to check on operations at the mines following a long meeting with the mine superintendent, Robinson was shot in the gut by one of his own guards. George Robinson lived an excruciating 36 hours before finally succumbing to his injuries.

The citizens of Leadville and Camp Robinson were shocked. Robinson, who had just weeks prior been elected Lieutenant Governor of Colorado, was transported back to Leadville, where he was eulogized by all the prominent figures of Lake County and the state, including Governor Frederick W. Pitkin. Newspapers reported the body lay in state in City Hall for several days in a casket trimmed in “native silver,” before being escorted by the Pitkin Light Infantry to the train depot for transportation home to Michigan.

Despite the loss of the camp’s namesake, the town of Robinson continued to grow, and the mines continued to flourish. The small town had been officially incorporated on November 26, 1880, the day before George Robinson’s shooting, as reported in the January 1, 1881 Leadville Daily Herald. By then, Camp Robinson boasted a nearly complete Catholic church, a brick yard, a lumber mill, chapters of both the Masons and Odd Fellows, “five first-class restaurants, fifteen to twenty boarding houses, two hotels ... three livery and feed stables, twenty-four saloons, two blacksmiths’, two carpenter shops, two newsstands and two dance halls, one second-hand store and seven grocery stores.” The town even had its own weekly paper, the Robinson Republican, owned and operated by Coe & McCready, who also owned the Summit County Times out of nearby Kokomo. For a time, Robinson was one of the richest producers — and one of the liveliest locations — in the Ten Mile district. As with so many boom towns before and since, though, the good times had to come to an end.

A large conflagration erupted in 1882, leveling many of the frame buildings of the town. By this point, the mineral wealth of the settlement was already starting to wane, and the citizens began leaving almost as quickly as they had come. The town enjoyed a brief revival when, in 1884, Robinson became the site of a turf war between the South Park and Denver & Rio Grande railroads, both vying for supremacy in the Ten Mile district, but this, too, was short-lived. The repeal of the Sherman Silver Purchase Act in 1893 dealt the camp a heavy blow, and the population of Robinson steadily declined, alongside the ore shipped from George Robinson’s original holdings.

The Herald Democrat announced that only 400 people remained in the Ten Mile mining district by mid-February 1899, and record snowfall caused them to run dangerously low on provisions and coal. “Strong men” were able to cross-country ski to Leadville, the Herald stated, but “the women and children are penned in.” Snow was too deep and falling too quickly to be cleared away for railroad passage, and no sleighs were able to make it there. By the time the storms cleared, the citizens of Robinson were ready to leave en masse.

Investors and lessees of the mines at one time owned by the Robinson Consolidated Mining Company set their sights towards “reviving the old Robinson bonanza” several times in the early 1900s, according to Herald Democrat correspondents, but none were ever able to return the site to its former glory.

Eventually, the land was absorbed into the Climax property, the remaining buildings cleared away, and the remaining dead exhumed and reinterred in Leadville. Today, the land that once produced so much mineral wealth and witnessed so many joys and sorrows lies submerged beneath the Robinson Tailings Pond visible beside Highway 91, just over the Lake County-Summit County border.  A marker placed by the Masons in recognition of the long-gone highest lodge in the country commemorates Robinson, Kokomo, Recen, and all the other towns lost along this stretch of highway.

In the next installment of the Herald’s series on boom towns near and in Lake County, to be published later this month, the newspaper will examine the history of the Climax Mine and the town that sprung up to house its workforce.