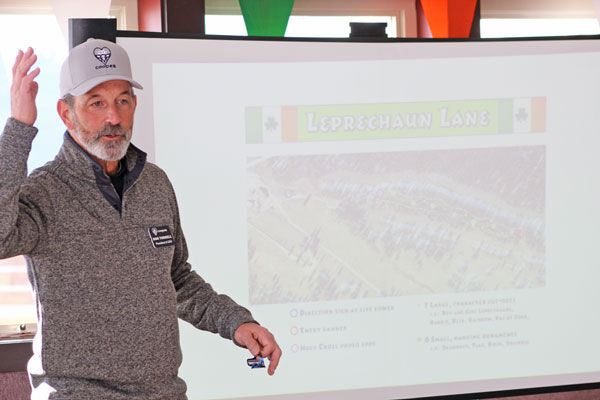 Ski Cooper General Manager Dan Torsell introduces Leprechaun Lane at Saturday’s community meeting, among other mountain updates. The new trail snakes through the woods and is designed for youth and beginner skiers. 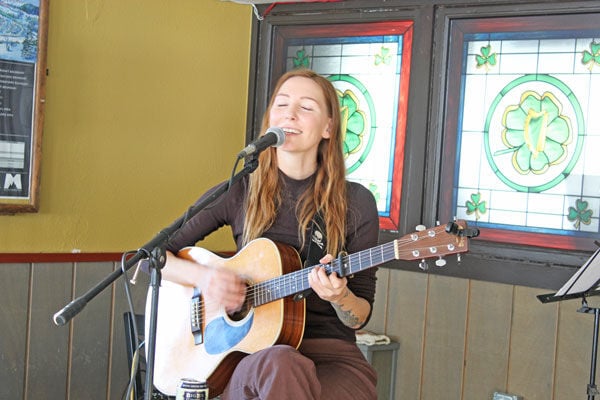 Local musician Rorey Carroll sings for a lodge full of friends over the weekend. George Finnell and Patrick Torsell also performed on Saturday. 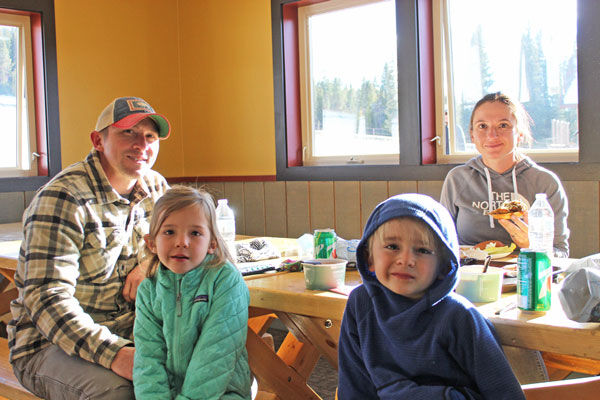 From left, Brett, Abby and Robby Hanger enjoy lunch at Ski Cooper’s lodge as part of the mountain’s annual Community Day over the weekend.

Ski Cooper General Manager Dan Torsell introduces Leprechaun Lane at Saturday’s community meeting, among other mountain updates. The new trail snakes through the woods and is designed for youth and beginner skiers.

Local musician Rorey Carroll sings for a lodge full of friends over the weekend. George Finnell and Patrick Torsell also performed on Saturday.

From left, Brett, Abby and Robby Hanger enjoy lunch at Ski Cooper’s lodge as part of the mountain’s annual Community Day over the weekend.

Ski Cooper celebrated its annual Community Day over the weekend with beverages, barbecue sandwiches and live music from three musicians at the Cooper Lodge. Earlier on Saturday, Ski Cooper General Manager Dan Torsell gave mountain updates at a meeting that was well attended by the public.

Before Torsell took the stage at Saturday’s community meeting, Ski Cooper Board Chairman John Clapper recognized several of the mountain’s staff members and highlighted initiatives at Ski Cooper that have garnered national attention over the last few years, including the mountain’s partner pass option, ski school programming and safety measures.

Clapper also mentioned data points that speak to Ski Cooper’s growth over the last ten years. Since 2012, total annual revenue has increased by 176 percent. Skier visits are up 42 percent. And revenue per skier day, which is derived from total annual revenue and skier visits, has increased by 94 percent. Ski Cooper has also increased its number of employees from 139 in 2012 to 216 in 2021. The number of full-time employees rose by 10, from six in 2012 to 16 in 2021.

Torsell, who has served as general manager since 2012, began his presentation by thanking Ski Cooper’s board of directors, which includes  Clapper, Howard Tritz, Greg Teter, Jane Harelson, Ken Donoher, Ron Yudnich, Bob Casey, Jerry Andrew and Susan FitzGerald. Seven of the nine directors went to Lake County High School and have been affiliated with the local mountain for decades.

In addition to thanks, Torsell shared mountain updates for the upcoming season, which is set to begin Dec. 8.

During the off-season, Ski Cooper crews added two new trails to the mountain and performed extensive work on trails throughout the Tennessee Creek Basin, the mountain’s backside that offers technical and steep terrain. Crews also cut vegetation on the trails for the first time this off-season. Torsell said the action will improve early-season conditions.

Leprechaun Lane, one of the new trails that Ski Cooper developed this year, is a tree-skiing trail meant for youth and beginner skiers. The trail is accessed from the halfway point of the Buckeye Platter and rests between lower Buckeye and lower Last Chance. Slider, the second new trail, runs through the Tennessee Creek Basin. Torsell said the single-black diamond trail is meant to attract more skiers to the mountain’s backside terrain.

Torsell added that crews thinned out a significant portion of standing trees throughout the Tennessee Creek Basin, an area that is known for narrow trails and tight turns. In addition to widening Lazy Elk Traverse, which Torsell calls the escape route from Tennessee Creek Basin, crews thinned out roughly 70 percent of the trail network throughout the basin.

Ski Cooper is also introducing a new bar this season. Timberline Taproom, which is located in the former children’s center, will offer craft beer, barbecue sandwiches and southwest chili, which Chef Scott Camp debuted on Community Day over the weekend. After expanding the rental shop for the upcoming season, Ski Cooper’s retail store now also resides in the former children’s center building.

After a difficult season dealing with COVID-19 last year, which actually ended as Ski Cooper’s best season to date, Torsell said the mountain is prepared to navigate the virus this season, although restrictions are significantly more lax than last season. Ski Cooper will not require that guests wear masks, although the mountain highly recommends the practice, said Torsell. Employees are not required to receive a vaccination; however, unvaccinated employees will receive a COVID-19 test weekly.

In keeping with last year’s corral policy, a new practice where guests scanned tickets once upon entering Ski Cooper, the mountain is building an automatic corral at its entrance. Torsell said he is working on a plan to admit guests into the lodge who do not have a pass or are not skiing. After scanning a ticket once this season, Torsell said skiers will not be asked for a ticket at any other location on the mountain.

“We are all really excited for this season,” said Torsell, who advised that skiers look out for more updates through Ski Cooper’s blog. “I’m really proud of what we do here and what we’ve been able to accomplish. We want to keep doing more.”