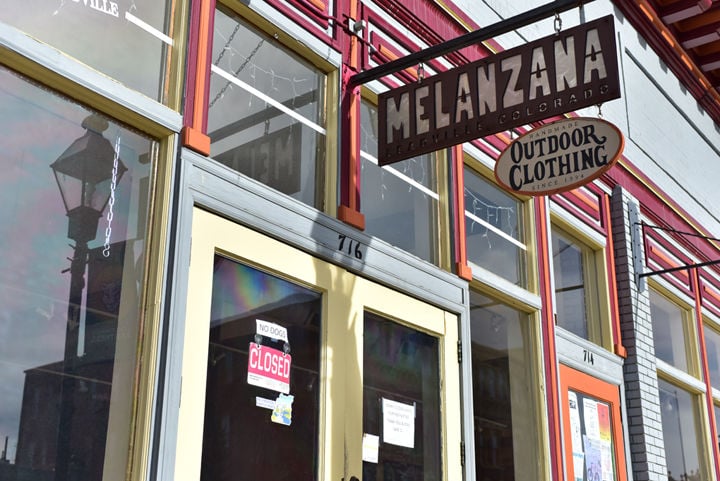 A normally-busy Melanzana storefront, temporarily closed in an effort to protect its employees and the public from the spread of the coronavirus, now hosts a sign urging would-be customers to stay safe. 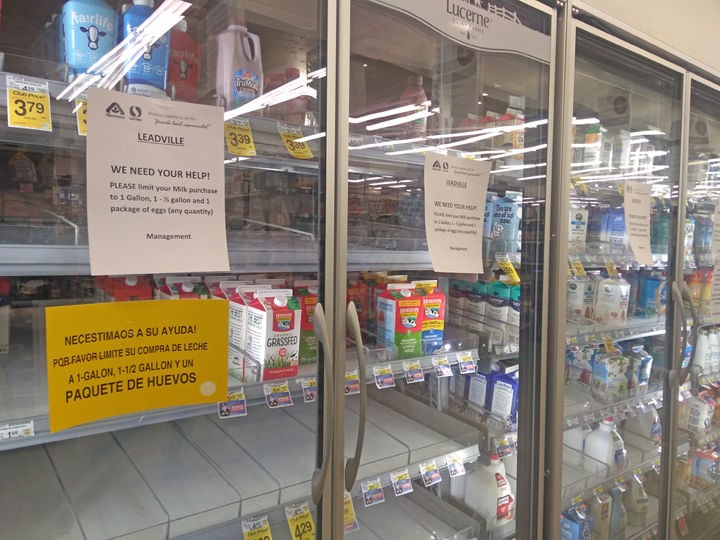 Leadville Safeway is limiting customers to one, two or three of certain items. The store also added shopping hours for populations most at-risk to COVID-19.

A normally-busy Melanzana storefront, temporarily closed in an effort to protect its employees and the public from the spread of the coronavirus, now hosts a sign urging would-be customers to stay safe.

Leadville Safeway is limiting customers to one, two or three of certain items. The store also added shopping hours for populations most at-risk to COVID-19.

Across the state food and retail establishments have been ordered to close to the public, and Leadville is bracing for the impact.

The closures mark a shift in response from Lake County and Leadville, which had previously been operating their emergency management plan at the second of three tiers.

The closure of non-essential businesses marks an escalation previously reserved for the first confirmed case of COVID-19 in Lake County, but now the Lake County Public Health Agency and Office of Emergency Management are operating on the understanding that coronavirus is present in the community, despite no confirmed positive tests.

On the heels of a March 14 order to close ski resorts state-wide, Governor Jared Polis followed by closing all food service businesses to public traffic, restricting them to delivery and carry out service only. On Monday, all non-essential businesses received a similar order to close their doors.

The impact of the closures is already being felt by business owners and employees alike.

Restaurants in Leadville have had to temporarily suspend much of their wait staff and front-of-house employees.

Since testing positive for influenza, Bryson Dixon has stayed home from his job at Treeline Kitchen, where he usually works in public-facing roles.

Dixon had been self-isolating for the past 12 days when he spoke with the Herald Democrat, and planned to continue doing so for the next seven days, he said.

Dixon, who lives with family, has missed about two weeks of work as a result of the illness, as well the need for sick employees to stay home from work and the increased risk of contracting the coronavirus, he said.

Dixon has applied for financial assistance programs offered by the state to help offset lost wages for employees forced to miss work as a result of closures in response to coronavirus, but he’s unsure if he’s eligible, and worried that having been sick before the closures were officially implemented may preclude him from receiving financial aid.

Once he’s back to full health, Dixon will be able to return to his position at Treeline Kitchen, but until then he’s uncertain about his financial stability, and he expressed concern about the end of the month arriving and rent being due soon.

Retail establishments are also feeling the effects and bracing for potential long-term closures.

Following the March 14 statewide closure of downhill ski resorts ordered by Polis, some ski shops in Leadville have shut down for the duration of the closure.

The timing of the closure, right before spring break and likely extending well beyond, has been particularly difficult for the ski industry, Tim Hill, owner and operator of Alpine Ski and Sport, said in an email.

In past years, this part of the season has accounted for as much as 30 percent of annual income for his shop, Hill said.

Hill acknowledged the importance of the closures, and thinks it will be beneficial to the public, but the impact will still be hard felt, he said.

In a preemptive move, Fritz Howard, owner and operator of Melanzana, closed the store’s retail and production operation on March 14.

“We don’t know what’s going to happen,” Howard said about the outlook for the impacts of the closure.

The entire Melanzana staff, 48 full time employees, is currently out of work, though they are still being paid regular wages, Howard said.

After a two week initial closure period, Howard will reevaluate the closure, and plan for a safe reopening when appropriate, he said.

Safeway, excluded from the list of non-essential businesses, has continued its operations, though they’ve had to adapt to the circumstances and made changes accordingly, Kristine Staaf, director of public affairs for the Denver division of Safeway Inc., said.

The local branch and stores throughout her division, encompassing all of Colorado and several neighboring states, have implemented practices to help maintain operations and try to limit the spread of coronavirus, Staaf said.

These measures include reduced business hours to allow for restocking and extra cleaning, as well as specific hours, Tuesdays and Thursdays 7 a.m. to 9 a.m., for elderly and otherwise vulnerable community members to shop, she said.

Locally and throughout the state, Safeway has implemented limits on purchasing more than three of certain popular items, such as paper goods and cleaning supplies, at a time.

The empty shelves that have been seen at the local branch are less a result of Safeway not having the supply to maintain the stock, but more about the rapid rate at which certain items are being purchased, she said.

While other businesses are having to temporarily suspend their employees, Safeway is hiring more people in its stores to help keep up with the increased sales and business, Staaf said.

The unknown variables, including how long the closures will last and what people can do to help alleviate the impacts on themselves and the community as a whole, was a common concern among everyone the Herald Democrat spoke with for this story.