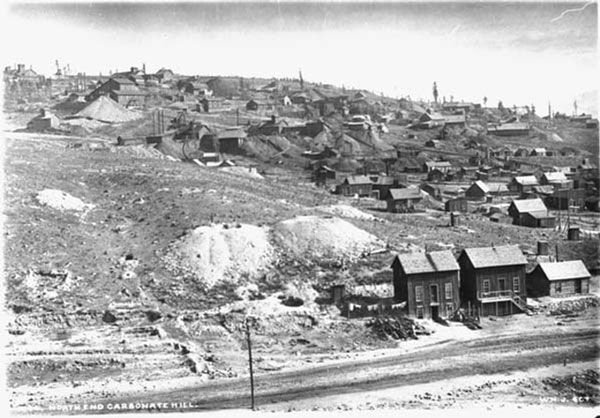 Wooden structures and few trees are found on the north end of Carbonate Hill in the late 19th century. 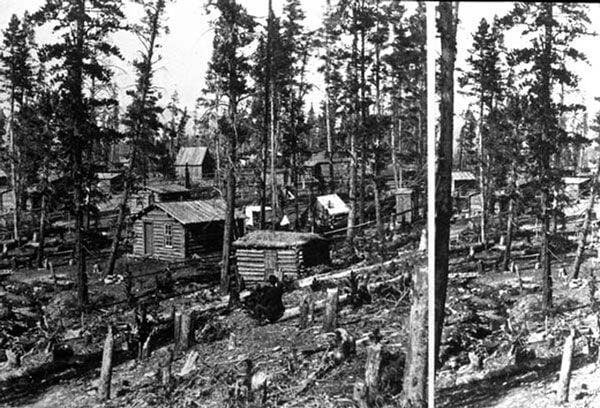 Cabins sit among a recently cut forest in Lake County. 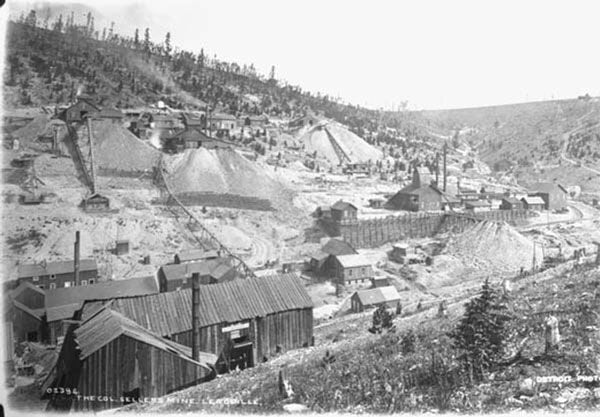 Thin groupings of trees line the hills around the Colonel Sellers Mine. Mines used lumber for the construction of headframes, buildings, roads, bridges and more. 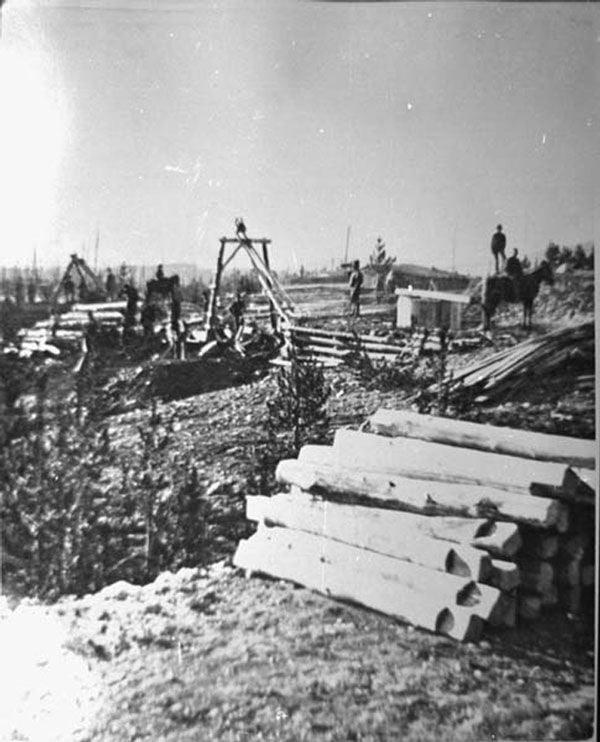 A lumber mill in Lake County processes stacks of wood. 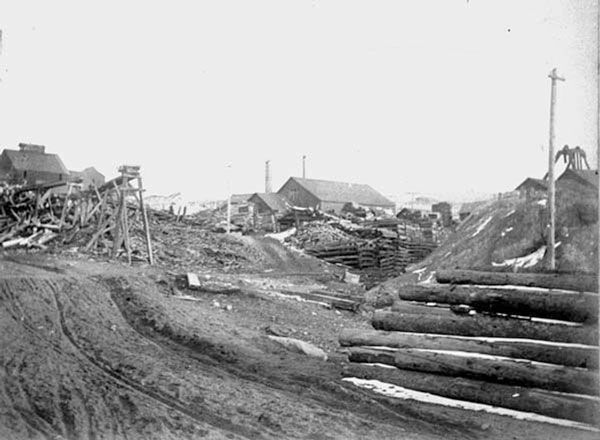 Lumber is stacked ready for use at Chrysolite Mill on Leadville’s east side. The timber industry thrived throughout Leadville’s mining boom. 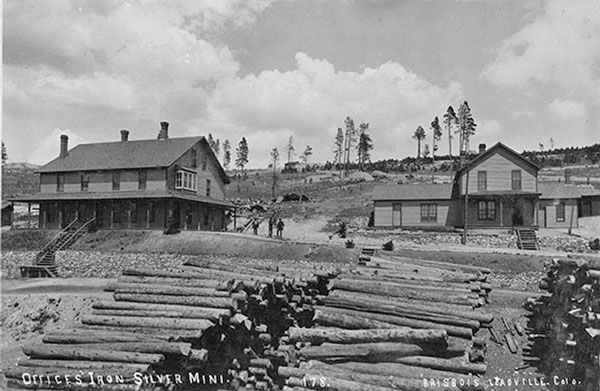 Stacks of lumber sit below two office buildings in the Leadville mining district.

Wooden structures and few trees are found on the north end of Carbonate Hill in the late 19th century.

Cabins sit among a recently cut forest in Lake County.

Thin groupings of trees line the hills around the Colonel Sellers Mine. Mines used lumber for the construction of headframes, buildings, roads, bridges and more.

A lumber mill in Lake County processes stacks of wood.

Lumber is stacked ready for use at Chrysolite Mill on Leadville’s east side. The timber industry thrived throughout Leadville’s mining boom.

Stacks of lumber sit below two office buildings in the Leadville mining district.

From the wooded banks lining Turquoise Lake to the forested foothills of the Mosquito Range, forests surround us here in Leadville.

Lake County’s forests purify the air we breath and filter the water we drink. They nurture the biodiversity with which we coexist and keep us cool in the summer months. They prevent the erosion of our steep hillsides and ward off climate change. Our forests are as utilitarian as they are beautiful.

Before the first people came to the Arkansas Valley, the region’s forests experienced natural cycles of growth and decline. Such cycles would have included wildfire, an essential part of forests’ ecological health.

The value of fire

The Ute people, the first inhabitants of the Arkansas Valley, were the first to manage the forests of what would one day become Lake County.

The Ute found value in fire. They harnessed flames as a land management strategy, a tool to open up landscapes and renew flora and fauna. Ute oral traditions recount the use of controlled burning to help improve hunting and wild plant yields, to fireproof areas they did not want to burn, and to manage pests. Grasslands were particularly common sites for the Ute to set low-intensity burns upon, renewing pastures for bison and other game.

In 1855, U.S. Major William Thornton observed two fires along the Arkansas River. Thornton recorded sending a scouting party “to examine the conditions of a large prairie fire, which had been lighted by the Indians and appeared to be approaching us.” And in a report penned by U.S. Forest Service Forestry Chief Franklin B. Hough in 1882, Hough recorded Indigenous groups setting fires in three different areas of Colorado in 1880.

“Many fires were deliberately set to partially open up the landscape, thereby increasing the variety of habitats and resources available for consumption,” Jerry Williams, the national historian for the Forest Service wrote in Fire Management Today of Indigenous peoples’ use of fire in the American West.

The value of timber

As settlers arrived in the Arkansas Valley and the government-sanctioned displacement of the Ute began, the region saw a drastic shift in forest management. Value was no longer found in fire, but in timber — the backbone of Leadville’s mining industry.

Miners used lumber for all sorts of construction: for shacks and cabins, headframes and scaffolding, tunnels and bridges. And when Leadville’s urban core began to grow, wood was used to build more substantial residences like Augusta and Horace Tabor’s home and the Healy House. The Leadville Ice Palace was even held up by wooden beams.

“With the rapid extension of our mining industries, there has been such a thinning out of our forests on this side of the range to meet the demand for mining and building purposes that the future supply is becoming a serious problem,” the Leadville Weekly Democrat reported on Dec. 31, 1881. “It is estimated that by July next all the available timber suitable for lumber will be exhausted and the mills will have to be moved to Ten Mile, up on the Eagle River or over the range.”

Downed timber was also used as fuel, both for the wood stoves and fireplaces that heated Cloud City’s buildings and for the charcoal that powered its smelters.

“All they had to build with was wood, and then smelters came into being and they needed charcoal,” said former Climax miner and Leadville local Howard Tritz.

In 1881, the Leadville Weekly Democrat reported that over 1,000,000 bushels of charcoal were used in Leadville every month. “The whole county has to be ransacked to obtain regularly the above vast amount of the article [charcoal],” the article reported. “In Lake county istelf charcoal burning has already made serious inroads upon the few remaining forests and the burners have already been forced to extend their operations into adjoining counties.”

Some smelters, like the Lizzie Furnace in Malta, constructed  saw mills on site to process their own fuel. Other smelters would buy charcoal from local burners, the remnants of which are found in the historic kilns scattered around Lake County today.

This high demand for wood sustained a thriving lumber industry, one that flourished on and off the books.

Birdseye Lumber, for example, set up camp at Howland near the mouth of Birseye Gulch in 1879. The lumber company primarily cut for charcoal creation and employed over 50 men, noted Don and Jean Griswold in their book “History of Leadville and Lake County, Colorado.” And by 1881, Tabor, Pierce & Co. “handled lumber from nearly every mill in this section of the country,” the Leadville Weekly Democrat reported.

In an article entitled “Timber Thieves” in the December 25, 1881 Leadville Weekly Herald, the newspaper recounts the arrest of six men for illegally cutting trees near the boundary of Lake and Summit counties.

“It is true, that without utilizing the timber resources of our district our mining interests cannot be properly taken of. The necessary material for timbering shafts and securing tunnels and drifts must be had, and the heavy expense will not allow it to be obtained from a distance” the article reads. “It is the indiscriminate depredator who fells our few remaining forests for the purposed of converting them into fuel, charcoal and building lumber, that the authorities are after. A rigorous enforcement of the law as it stands may prove a hardship to a few, but it will be of incalculable benefit to the many.”

The clear cutting of nearby woodlands to build and fuel Leadville’s mining boom left once forested hills and mountainsides without trees. This denudation, which took place over a just few decades, would give way to even-aged forests.

These new forests grew in unison, lacking diversity of age, of species and of size, as the United States launched into a new era of fire suppression.

The value of suppression

In January 1914, Robert E. Clark, the supervisor of the Leadville National Forest, wrote a guest column the Herald outlining the importance of protections to guard against fire. One important element of this work, Clark noted, was to build fire roads.

“These trails will be patrolled during the dangerous periods for the purpose of discovering all fires in the least possible time after starting,” Clark wrote. “A quick discovery and report, followed by ready means of access and adequate means of suppression, should ultimately reduce our fire danger to a minimum. Our protection work consists in fortifying ourselves against the action of this destructive agent.”

Fire suppression, the practice of snuffing out wildfire as quickly as possible, gained public support after the Great Fire of 1910 burned over three million acres in Idaho, Montana and Washington. The blaze killed 86 people and burned acres upon acres of timber, a resource the federal government deemed too valuable to let burn.

In 1935, the Forest Service formalized fire suppression with its “10 a.m. policy,” requiring agencies to suppress forest fires by 10 a.m. the day after the blaze was reported. Smokey Bear, the cartoon poster boy for fire suppression, followed a decade later with his tagline “Only you can prevent wildfires.”

“We went through this long period of time where every fire was put out instantly ... it stopped nature’s natural process,” Leadville/Lake County Fire-Rescue Captain Dave McCann, who heads up the agency’s wildland fire program, said of fire suppression.

The exclusion of fire from landscapes left many forests in a precarious position, leaving overstocked and overgrown fuel loads ready to burn faster and hotter than ever before.

The presence of fire

Wildfires have burned throughout Lake County for as long as records show, despite rampant clear cutting and use of fire suppression practices.

“In all directions from Leadville forest fires are raging, the heavy winds of the past few days having fueled them into great proportions,” the Leadville Weekly Herald reported in June 1881. “From Half Moon gulch to the summit of the pass towards Red Cliff, four immense fires are now burning — one in Half Moon, another in Brady gulch, a third on the north slope of Mount Massive, and the fourth near the summit of the range. On the upper Arkansas is another fire, while on Breece hill and again in Empire and Iowa gulches great conflagrations are raging. The destruction to timber by these fires is immense, and will be seriously felt in future years of mining about Leadville.”

Newspaper records also recount wildfires near Granite (1908), Pando (1917) and Tennessee Pass (1924), to name a few. More recently, Lake County saw the Treasure Fire near Birdseye Gulch in 2012 and the Lodgepole Fire at the base of Mt. Elbert in 2014.

The forest management practices utilized throughout Lake County’s history, both timber harvesting and fire suppression, have left our forests in a brittle state. They are dense, relatively homogenous in species and in age, and are experiencing a historic drought cycle. They are vulnerable — they are waiting to burn.

In the next installment of “Our Forests,” to be published on July 15, the Herald’s reporter, Patrick Bilow, will investigate the current state of our forests.