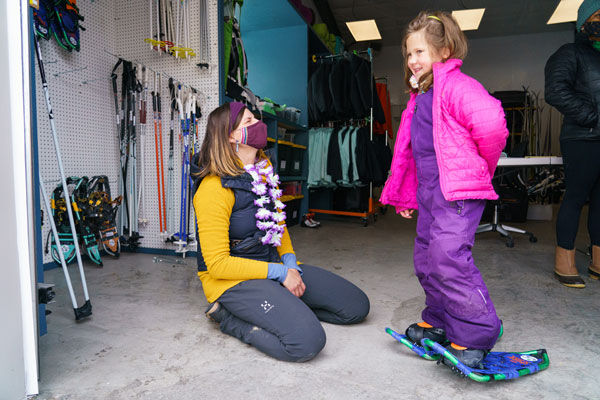 Mary Palumbo of Get Outdoors Leadville! outfits Vivie O’Brien with a set of snowshoes at the grand opening of the organization’s new gear library. 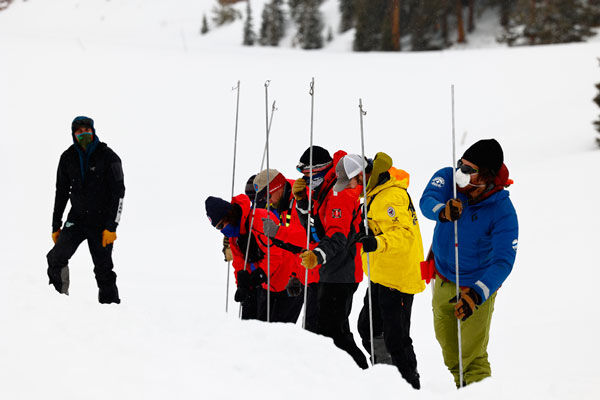 An orange mushroom cloud formation rolls over Leadville in June. Meteorologists attributed the unique formation to a thunderstorm cloud hanging over Park County. 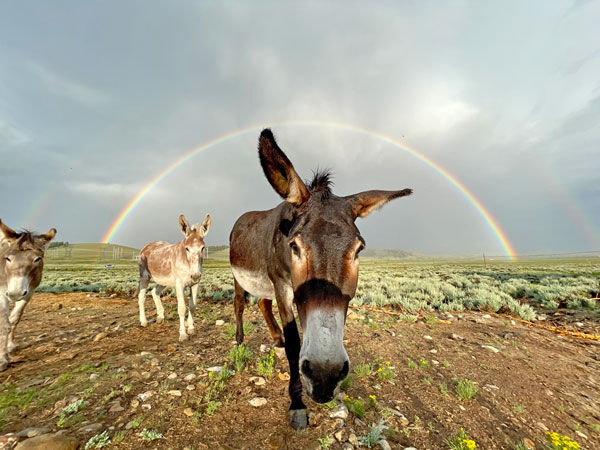 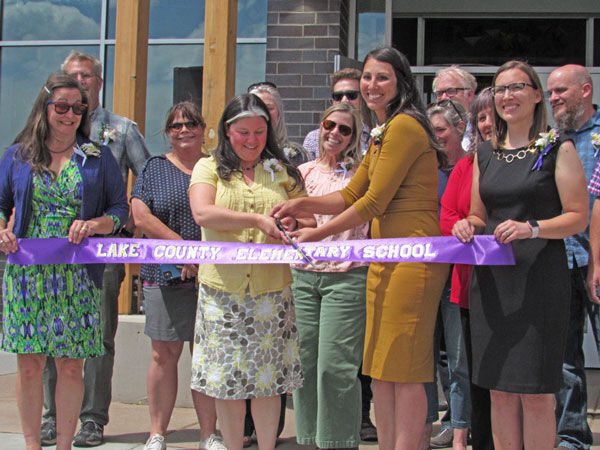 Mary Palumbo of Get Outdoors Leadville! outfits Vivie O’Brien with a set of snowshoes at the grand opening of the organization’s new gear library.

An orange mushroom cloud formation rolls over Leadville in June. Meteorologists attributed the unique formation to a thunderstorm cloud hanging over Park County.

The City of Leadville works with Xcel Energy, Alliance Electric Solutions and Sturgeon Electric Company to plan the installation of the city’s first publicly-accessible electric vehicle charging station at the southern end of Harrison Avenue.

Lake County Government renews wildfire planning efforts with a series of meetings and a community survey on local assets. The efforts will lead to the eventual updating of the Lake County Community Wildfire Protection Plan.

Local organizations and government entities present at a virtual State of the Community event. Members of the Unmet Needs Committee and Lake County Public Health Agency Director Colleen Nielsen are presented with awards for their service during the pandemic.

A local man falls 30 feet into a collapsed mine shaft while attempting to access his storage unit at Leadville Storage LLC. Leadville/Lake County Fire-Rescue and Lake County Search and Rescue partner to rescue the man from the shaft.

The Leadville Boom Days Committee announces that the event will not happen in 2021 due to limitations associated with the COVID-19 pandemic.

Ski Cooper ends its busiest season yet, recording more visits than ever before.

The Lake County Aquatic Center permanently shuts its doors after nearly 50 years of operation due to a variety of issues with the facility.

Lake County High School senior Fabian Jimenez is selected as a recipient of the Boettcher Foundation Scholarship, earning a full ride to Colorado School of Mines to study engineering.

A group of disgruntled citizens gather at the Lake County Courthouse to discuss their grievances with the Board of County Commissioners. The board later hosts a community forum on the hiring of a county manager.

A variety of Leadville Race Series permits are approved by Lake County Government and the City of Leadville, marking the return of the summer races.

Solvista Health breaks ground on a new regional assessment center on the Heart of the Rockies Regional Medical Center campus in Salida. The facility is set to provide 24/7 crisis services, withdrawal management, respite care and more.

commencement ceremony due to the pandemic. The socially distanced graduation was held outside.

Lake County Government releases the results of its community survey on wildfire protection. More than 500 survey responses offered a glimpse into understandings of wildfire risk at the local level, as well as valued assets to protect.

By early May, about 50 percent of Lake County’s eligible population is vaccinated against COVID-19.

St. George Community Meals is awarded a $25,000 Culture of Health award from the Robert Wood Johnson Foundation, dispensed through Lake County Build a Generation, for the creation of a mobile food pantry.

The Board of County Commissioners hold a town hall to discuss the controversial hiring of a county manager. The meeting goes on for more than three hours with over 50 participants.

Construction begins on the southern fire station yet again, this time under the leadership of L.M. Kersting.

Independence Pass opens for the summer season after the Colorado Department of Transportation removes about 25 loads of loose rock from a section of highway near the Grottos trailhead.

Jesus Artica pleads not guilty to second degree murder in association with the death of Yolanda LaCome. Artica will head to trial in 2022.

Saige Bertolas resigns from the Leadville Police Department, citing frustration with the department’s high rate of turnover. Mayor Greg Labbe and Sheriff Amy Reyes run the department in the interim.

The Board of County Commissioners approve the construction of a Taco Bell on the site of the former Kristi Lanes Bowling.

Sam Reynolds resigns from the Lake County Sheriff’s Office after Fifth Judicial District Attorney Heidi McCollum halts the prosecution of cases in which Reynolds was the sole law enforcement agent on the scene. McCollum expressed concern over Reynolds’ use of force and lack of care for his duties as a law enforcement agent.

Housing prices skyrocket as demand increases in Lake County. The Herald reports that Lake County’s real estate market has more than doubled in value since 2015, with more than $89 million in sales in 2020.

The Board of County Commissioners approves an application filed by Turner Management Company LLC to build a Taco Bell in Leadville’s commercial corridor.

Katie Pongrekun begins as principal of the Lake County Elementary School, promising an emphasis on literacy.

Sarah Dae Dallas leaves her position as administrative services manager for the City of Leadville after more than seven years of service.

City Council approves a conditional use permit allowing Melanzana to expand its operations across the street, where the company now rents space.

About 40 Pan Ark Estates residents attend a public hearing to discuss whether the subdivision will organize as a special taxing district.

After nearly 12 years as executive director of Lake County Build a Generation, Katie Baldassar steps away from her position.

A group of 90 Air Force Academy cadets stay at Colorado Mountain College in Leadville during the Outdoor Leadership Development Program, which incorporated outdoor recreation throughout the Upper Arkansas River Valley.

Hal Edwards is appointed Leadville Police Department commissioner and promises a new beginning for the department.

Rose Grant of Columbia Falls, Montana and Keegan Swenson of Heber City, Utah win the Leadville Trail 100 MTB race for women and men respectively. One cyclist died during the race.

A St. Vincent Health oversight after the hospital’s merger with Rocky Mountain Family Practice leads to a lapse in medical services for Lake County veterans. Services are reinstated shortly after the Herald’s coverage of the issue.

Alexander Krieg is appointed Lake County Coroner, promising consistency after a year of turmoil within the department.

Businesses along Harrison Avenue report their busiest summer ever, with some saying there is no longer a shoulder season in Leadville. As foot traffic increases, labor shortages persist.

The Leadville Sanitation District announces that the group is working on a master plan that will inform capital improvement projects over the next ten years.

St. Vincent Health opens Lake County’s $26 million hospital with a ribbon cutting ceremony and open house. The new hospital introduces a host of services that were not previously offered in Lake County.

Former Lake County Coroner Shannon Kent is found guilty of misconduct for not properly documenting the appointment of his wife Staci Kent as deputy coroner. Shannon Kent will appear again in court in 2022.

Andrew Mackie, who served as executive director of the Central Colorado Conservancy from 2009 until 2019, is honored with the Doc Smith Leaders in Conservation Award presented by the Lake County Open Space Initiative.

A group of thru-hikers on the Continental Divide Trail gather at FREIGHT for Trail Daze, where hikers Zelzin Aketzalli and Tyler Lau speak about their experiences on the trail and equity in outdoor recreation.

The Herald reports on how the Unmet Needs Committee worked to curb evictions during the pandemic, including the distribution of more than $725,000 in cash relief since March 2020.

The Board of County Commissioners hires Tim Bergman as county manager, a new position intended to spur efficiencies within county government.

Iretta Bell, one of the first women to compete in the Leadville Boom Days Pack Burro Race, recounts running the race in 1959 with burro Wooly Bear.

Roughly 200 people gather at Evergreen Cemetery to dedicate a memorial honoring the lives of more than 1,300 people who were buried in paupers’ graves at the historic cemetery over a century ago, many of whom were Irish immigrants.