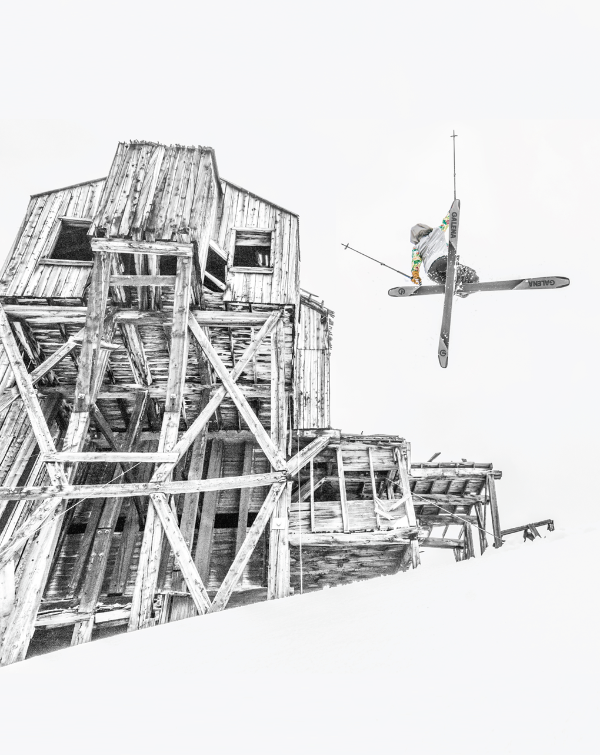 Garry Masaru Schlag takes flight on skis in front of Champion Mill. Schlag has learned to love backcountry skiing since moving to Leadville. 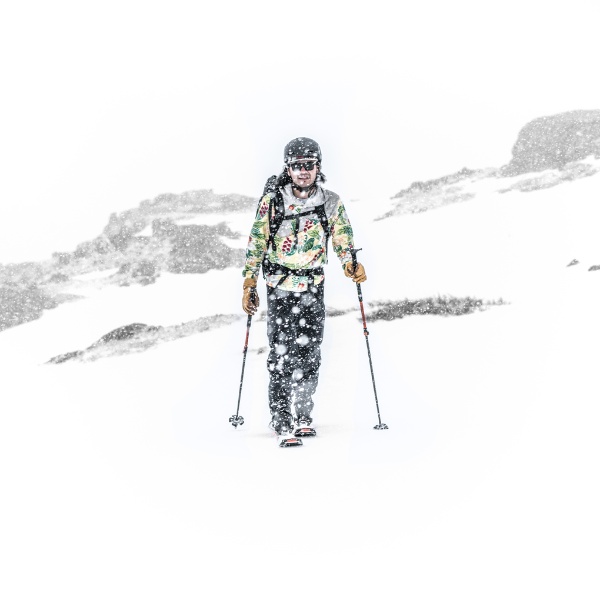 Leadville local Garry Masaru Schlag travels through a snow storm on skis. Schlag recently wrote an article for POWDER Magazine on their experiences facing racism within the ski industry.

Garry Masaru Schlag takes flight on skis in front of Champion Mill. Schlag has learned to love backcountry skiing since moving to Leadville.

Leadville local Garry Masaru Schlag travels through a snow storm on skis. Schlag recently wrote an article for POWDER Magazine on their experiences facing racism within the ski industry.

You might recognize Leadville resident and backcountry skier Garry Masaru Schlag from photos around town.

In the back corner of City on a Hill Coffee & Espresso, a photo shot by local photographer Justin Talbot shows Schlag in Leadville’s backcountry, several feet from the ground with skis crossed and the historic Champion Mill in the background. Schlag appears poised mid-air, enjoying a moment of flight before touching down on soft snow.

Throughout Talbot’s guidebooks, displayed at several local businesses, similar photos depict Schlag contorted in the sky or grinning as the skier climbs on skins through a blizzard.

“Every year when it starts snowing, I get a little nervous to ski,” said Schlag, who prefers they/them pronouns. “But then in seconds, it’s like, ‘I know how to do this. I’ve always known how to do this.’ Skiing has been second nature for as long as I can remember.”

Schlag, who has lived in Leadville for three years now, was born in New York City and learned to ski in the Catskill Mountains when they were three. Since then, Schlag has built a life around skiing, securing partnerships with Voile Backcountry Manufacturing and Gnarly Nutrition and tackling lines throughout the Sawatch Range. As a self-identfied Asian American, Schlag has also voiced concern about equity in the ski industry.

When Schlag was 10 years old, their family moved to Park City, Utah, where Schlag began competing as a mogul and big mountain skier. The practices, highlighted by lectures on technique and repetition, became the antithesis to Schlag’s free spirit. “It wasn’t fun anymore,” said Schlag, who quit competing at 18 years old. “I didn’t want to hear about boot pressure. I knew what I was doing and I just wanted to ski.”

Schlag’s first big line as an independent skier arrived in early 2018, just after moving to Leadville. Schlag and a friend climbed to the top of La Plata Peak near Twin Lakes and dropped in from the summit, cutting sharp lines in the snow with each turn. Schlag recalls a feeling of adrenaline as they plummeted toward Twin Lakes, a feeling that the skier has recognized often since.

“It’s really nice working with a such a talented skier,” said Talbot, who owns Galena Mountain Project in Leadville, where Schlag also works. When the pair set out to capture the Champion Mill photo, Talbot asked Schlag to hit the feature more than 15 times. “Garry did it perfectly every single time, just landing the trick and happy to be out there,” said Talbot. “As a photographer who also skis, it’s inspiring to be around someone like that; makes me want to get better at both.”

When Schlag isn’t skiing, they are dabbling in poetry, mountain biking or running. This summer, when Schlag decided to enter the Leadville Trail 100 MTB race, spectators saw the local skier wearing a purple tutu and grinning from ear to ear, an attempt to “queer up the course a bit,” as Schlag told the Herald.

“I try not to take life too seriously,” said Schlag. “It’s not really about the big aesthetic lines for me. I just want to be out there, enjoying the reasons I moved to Leadville. Every time I set out on an adventure, something cool and exciting happens.”

Despite Schlag’s nonchalant take on life, the skier’s career took a more serious turn last year. Although it’s easy to smile in the backcountry, where solitude mixes with the shining sun and soft snow, resort skiing reveals a less cheery side of the sport. According to the National Ski Area Association, of the 9.2 million Americans who skied during the 2019-2020 season, 88 percent identified as white.

Fueled by their own experience with racism in the ski industry, Schlag wrote an article for POWDER Magazine last year titled “No, Skiing Isn’t a Welcome Place for People of Color—Not Yet.” In the article, which Schlag said has received support and backlash, the skier shares experiences of being called “twinkie” and “slant-eyed devil” on the slopes, and questions events like skijoring, which rose to prominence while racism and segregation persisted throughout the nation.

About a year later, as resorts grow and ski towns swell during the winter, Schlag isn’t certain much has changed. In the article, Schlag advocated for funding opportunities that encourage people of color to ski and more diversity in ski area leadership. But Schlag doesn’t want to be the judge of change. Instead, they think more voices should be amplified as part of a more inclusive conversation about reform.

“Skiing is something I want to do for the rest of my life,” said Schlag. “Everyone deserves to find something like that.”