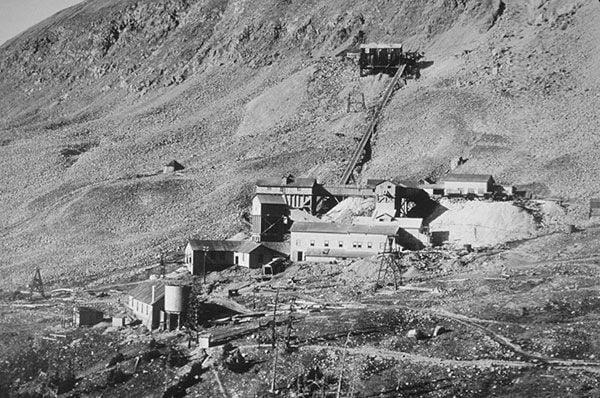 Pictured here is the upper camp of Climax Molybdenum Company on the west side of Bartlett Mountain around 1918. 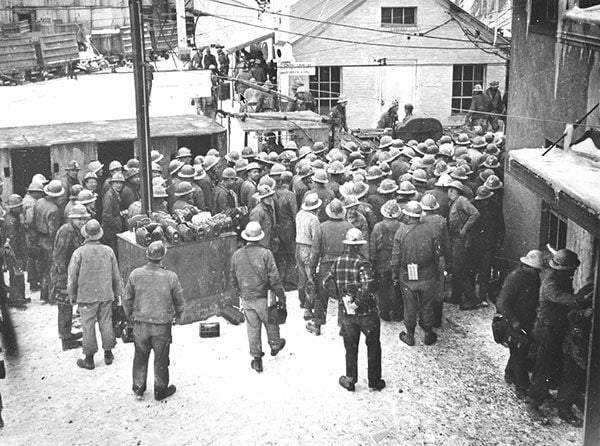 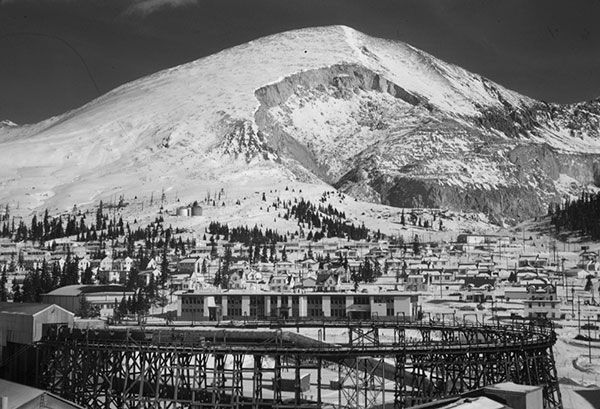 The school and town of Climax is shown in this 1950s photo with the Glory Hole as a backdrop. The photo includes the elevated loop that allowed mine cars to turn around and head back to the Phillipson level. 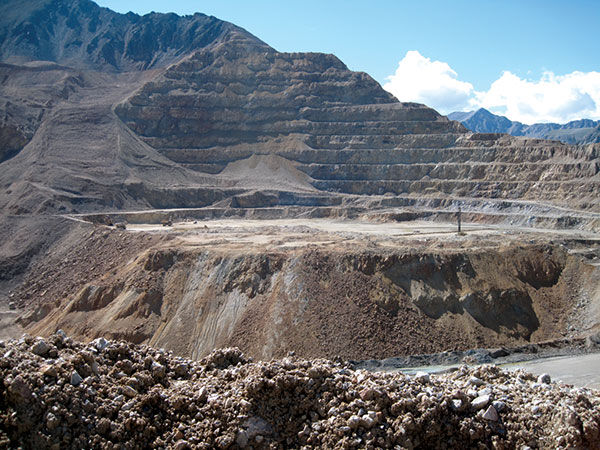 Pictured here is the upper camp of Climax Molybdenum Company on the west side of Bartlett Mountain around 1918.

The school and town of Climax is shown in this 1950s photo with the Glory Hole as a backdrop. The photo includes the elevated loop that allowed mine cars to turn around and head back to the Phillipson level.

The story of the Climax Mine began 130 years ago when prospector Charles Senter discovered an enormous low-grade deposit of an unknown mineral on Bartlett Mountain near Fremont Pass. Fifteen years passed before mineralogists correctly identified the mineral as molybdenite, a disulfide of molybdenum and the only known ore of that metal. At the time, however, molybdenum was a laboratory curiosity with no uses and no value.

But by the early 1900s, French and German metallurgists had determined that molybdenum had a very high melting point and a remarkable ability to enhance the durability, toughness, corrosion-resistance and thermal performance of steel alloys. When war erupted in Europe in 1914, Germany unexpectedly unveiled an arsenal of molybdenum-steel gun barrels and armor far superior to those of the Allies.

As wartime demand sent molybdenum prices soaring, prospectors and speculators rushed to the tiny railroad water stop named Climax atop Fremont Pass. Of the three companies that battled for control of Bartlett Mountain, the Climax Molybdenum Company emerged victorious and began mining and milling molybdenite ore in February 1918, at the rate of 250 tons of ore per day. Molybdenum alloys proved invaluable for the Allies in weapons-grade steel, armor and aircraft engines. But production at Climax lasted only 10 months and the mine closed when the molybdenum market collapsed following the Armistice of November 1918.

After the Climax Mine closed in 1918, Brainerd Phillipson, president of the New York City-based Climax Molybdenum Company, worked to interest American industry in peacetime uses of molybdenum-steel alloys. His success enabled the Climax Mine to reopen in 1924.

In 1929, realizing that only mass mining would make the low-grade ore at Climax profitable, Phillipson gambled on the development of an innovative block-cave mining system and a large, double-tracked haulage tunnel that would serve a 30-mile-long network of underground workings beneath the ore body. Engineers believed that constructing a system of workings beneath the ore body would cause the ore to crush itself under its own weight and move largely by gravity into an endless line of waiting ore trains.

When the new mining system went into operation in 1934, the cost-efficiency of block-cave mining together with mass electric haulage exceeded even the wildest projections. As mining costs plummeted, Climax metallurgists introduced an advanced line of high-strength “moly” steels. With high mine production and soaring profits, Climax turned in the best financial performance of any Depression-era American company.

During World War II, when molybdenum became a strategic metal, the federal War Production Board designated Climax as the top-priority mine in the United States and ordered it to emergency production. Climax worked around the clock to produce at 150 percent of its design capacity for more than three years, providing virtually all the molybdenum needed for the Allied war effort.

Three years of emergency production during World War II nearly destroyed the Climax Mine.  The mine was rebuilt just in time for another round of emergency production during the Korean War. Climax then embarked on a major modernization and expansion program as metallurgists found new uses for molybdenum in pigments, fertilizers and high-temperature alloys for jet and rocket engines.

By 1957, with 1,800 employees mining and milling 35,000 tons of ore per day, Climax ranked as the world’s largest underground mine. To accommodate further expansion, the Climax company town, elevation 11,450 feet above sea level and the highest town in North America, was moved — structure by structure — 12 miles “down the hill” to Leadville.

In 1958, the Climax Molybdenum Company merged with the American Metal Company to form American Metal Climax (AMAX). During the 1970s, 3,000 Climax employees mined 50,000 tons of ore per day from three underground levels and a newly developed open pit. The drills and haulage trucks in the open pit — the world’s highest with upper benches above 12,000 feet in elevation — required special lubricants and mechanical components to function in the severe alpine winter conditions.

By then, Climax had mined 500 million tons of molybdenite ore to recover two billion pounds of elemental molybdenum with a year-mined value of $4 billion — one of the world’s highest single-mine mine-production records. But ironically, just as molybdenum demand peaked, the economic recession of 1980 slashed steel demand. Facing world-wide oversupply, the molybdenum market crashed, forcing Climax to suspend production.

After suspending production in 1982, the Climax Mine operated only sporadically in a continuing weak molybdenum market. After 1986, the mine’s sharply reduced workforce balanced occasional, limited production with a program of downsizing, demolition, cost-cutting and environmental reclamation. To reduce its overall production capacity from 55,000 to 24,000 tons per day, Climax closed its underground levels, scrapped unneeded mill circuits, and disposed of large amounts of obsolescent equipment.

In 1993, Cyprus Minerals bought out AMAX to form Cyprus-AMAX, which was in turn acquired by copper-mining giant Phelps Dodge in 1999. In 2007, Climax became a subsidiary of its current owner, Phoenix, Ariz.-based Freeport-McMoRan Copper & Gold, Inc.

In recent years, Climax has emphasized environmental reclamation and water-quality maintenance. Since the 1960s, the mine has spent $70 million to maintain and improve water quality in Tenmile Creek (a tributary of the Blue River). Thanks to state-of-the-art treatment methods, all water discharged into Tenmile Creek is in full accordance with all state and federal permits. Climax is also recognized as a pioneer in the development of high-altitude, mined-land reclamation methods.

The Climax open-pit reserves are pegged at 137 million tons of ore grading 0.317 percent molybdenum disulfide and containing some 500 million pounds of elemental molybdenum — enough for 20 years of mining. In 2006, high molybdenum prices spurred the decision to reopen the mine. A subsequent $500 million modernization program was half completed when it was suspended in 2008 due to a weakened molybdenum market.

During 2010 and 2011, construction activities continued at Climax in preparation for the eventual restart.

On May 10, 2012, the first shipment of molybdenum left the mine, and production has continued since that time.

Steve Voynick is author of “Climax: The History of Colorado’s Climax Molybdenum Mine.” This article was provided to the Herald Democrat by the National Mining Hall of Fame and Museum and published in the Herald’s Leadvile Lake County Heritage Guide.

The newspaper will publish it’s 2020 Heritage Guide, “The Women of Leadville,” on September 4 of this year, in recognition of Labor Day weekend.