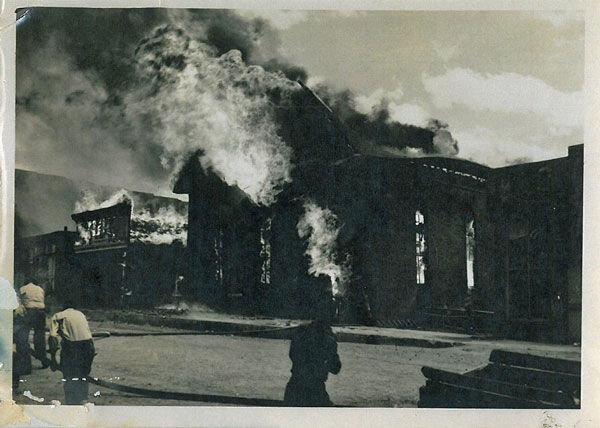 Firefighters attempt to slow the blaze of the Methodist Church in 1954. The house of worship was originally built in 1886. 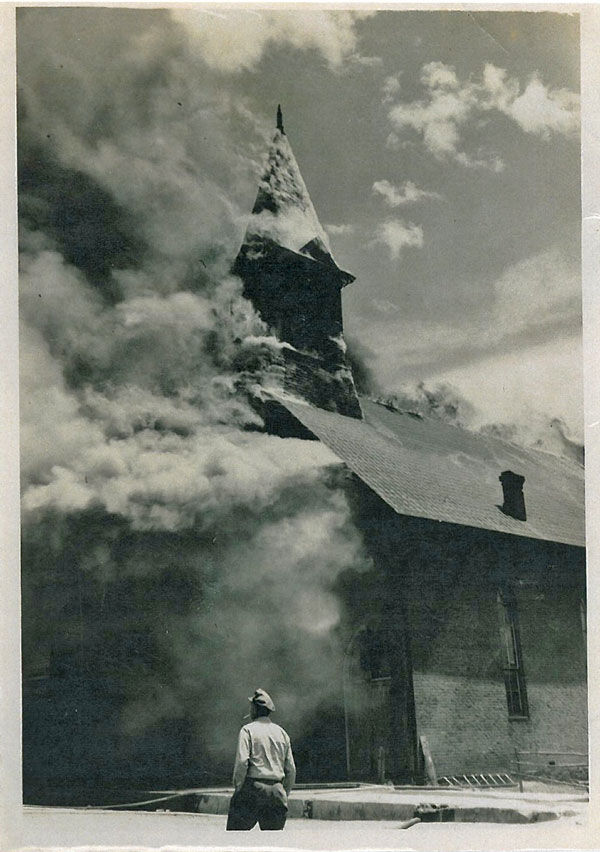 Smoke billows out of the windows of the Methodist Church on June 14, 1954. The church was destroyed in the fire and is no longer standing.

Firefighters attempt to slow the blaze of the Methodist Church in 1954. The house of worship was originally built in 1886.

Smoke billows out of the windows of the Methodist Church on June 14, 1954. The church was destroyed in the fire and is no longer standing.

A fire which broke out in the Methodist church at 129 East Sixth Street at about 11:45 this morning completely demolished that building and a garage standing next to it which is owned by Joe Kulcher.

The fire department was called shortly before noon when the church was already burning furiously. Within an hour the two buildings were completely destroyed.

The walls of the church were dynamited when the fire was at its worst to keep the fire from spreading any further. Strong winds helped to fan the flames at various times while the church and garage were burning.

A great number of volunteers helped the Leadville fire department fight the fire, which was finally put under control at about 1:15 p.m.

The Camp Hale fire fighting department had been called and they arrived in town at about 1:40 p.m. and stood by in case the fire should flare up again.

At various times while the two buildings were burning there seemed to be great danger that the city garage, west of the Methodist church, or a building across the street next to the Moose lodge building would also be consumed by the fire due to the strong winds.

Due to the great excess of water being used, at times the water pressure diminished greatly and Leadvillites were asked not to use water unless it was necessary.

The Methodist church had been an old Leadville landmark, since it is presumed to be about 60 years old.

The origin of the fire has not yet been determined.

The fire which destroyed the Methodist church building at 129 East Sixth street yesterday destroyed one of Leadville’s famous landmarks.

Frank E. Brown, venerable and respected pioneer Leadville citizen, is keeper of the church archives, and he has given a short history concerning the building.

Mr. Brown has been a Leadvillite for 75 years, having come here in 1879 in a stagecoach over the Mosquito range.

Mr. Brown reported that the Methodist church which burned yesterday was built in 1886 by Leadville Methodists who had to go into debt to complete the structure, which was a frame building with a brick veneer. The debt, however, had long ago been paid and the church was mortgage-free.

In 1875, according to Mr. Brown, the Methodists had built a church in the 300 block on West Third Street, and this had been their church until they completed the one which stood at 129 East Sixth street.

At the time of the fire, the church was being rented to a Baptist-affiliated organization and was also used as Boy Scout headquarters.