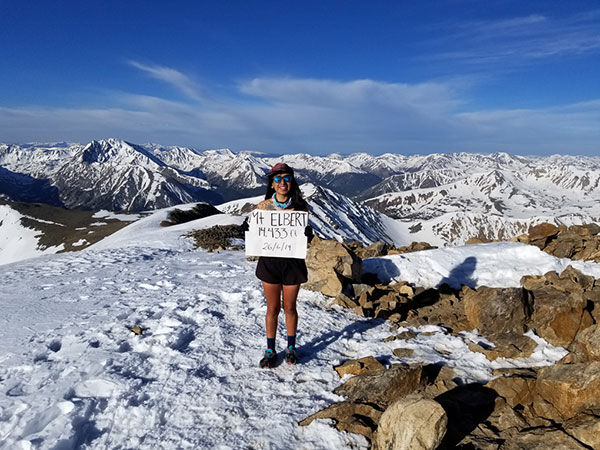 Zelzin Aketzalli is pictured atop Mount Elbert during her 2019 thru-hike of the Continental Divide Trail. 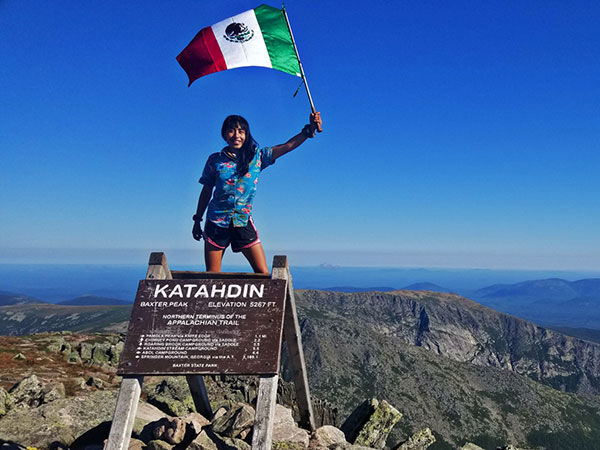 Zelzin Aketzalli poses with the Mexican flag on top of Mount Katahdin, the northern terminus of the Appalachian Trail. Aketzalli is the only Mexican to-date to earn the Triple Crown of Hiking, a title given to those who have completed the Pacific Crest, Continental Divide and Appalachian Trails.

Zelzin Aketzalli is pictured atop Mount Elbert during her 2019 thru-hike of the Continental Divide Trail.

Zelzin Aketzalli poses with the Mexican flag on top of Mount Katahdin, the northern terminus of the Appalachian Trail. Aketzalli is the only Mexican to-date to earn the Triple Crown of Hiking, a title given to those who have completed the Pacific Crest, Continental Divide and Appalachian Trails.

Zelzin Aketzalli walked into Leadville at the beginning of this summer with thousands of miles of trail behind her and ambitious goals ahead.

Aketzalli is a thru-hiker — someone who travels long-distances trails. And as of last year, Aketzalli is the first and, to date, only Mexican to complete the Triple Crown of Hiking – a title earned by thru-hikers who have hiked the Appalachian, Continental Divide and Pacific Crest Trails in their entireties.

Aketzalli, who lived in Leadville this summer, had been through Cloud City a number of times on her cross-country trips. The proximity to wild places, coupled with the opportunities they present for training, made it a natural fit as a summer home base, she said.

While Aketzalli’s interest in outdoor recreation began with mountain biking, she said she never loved the sport in the way she came to love thru-hiking. After a cyclist friend introduced her to the idea of going to the U.S. to complete the Pacific Crest Trail (PCT), Aketzalli started to plan for the trip.

She found herself without many opportunities to train near her home in Mexico City, where she said it is hard to find a trail over 10 kilometers long.

In addition to the lack of long-distance trails, she was apprehensive of traveling solo, particularly as a woman, in the outlying areas around the city. Aketzalli said it is not uncommon for people to ambush hikers and assault them, steal their supplies, or both.

Despite the absence of extended trail systems and dangerous circumstances, she found training grounds in the volcanic peaks of southern Mexico, and seized the opportunity to embark with a friend on a learning trip to the mountains.

Aketzalli began her conditioning on Iztaccíhuatl, a 17,160-foot peak near Mexico City, to train for her first thru-hike along the PCT – a trail that contains similar elements to those found on the peak.

Following a slapdash month of training, Aketzalli almost abandoned the trip at the last moment. Fearing her unfamiliarity with the U.S., visa and permit issues, her status as a Mexican national given the political climate in the wake of Donald Trump’s election, and not knowing English, she said she nearly gave up on the idea shortly before leaving for the States.

Despite her nervousness and the challenges she faced, Aketzalli began the PCT in April 2017. She was pleasantly surprised at every turn.

In Aketzalli’s telling of it, she found welcoming, helpful and kind people who supported her throughout her trip. Strangers brought her food, new-found friends offered her places to stay, and an encouraging community of hikers supported her push to finish the PCT.

She completed the 2,653-mile-long trail, and learned English along the way, over the course of 153 days. Her trip ended with a newfound love for long-distance hiking.

It was during this hike that Aketzalli learned of the Triple Crown of Hiking. She noticed that of the approximately 400 people who have earned the title, no Mexicans had completed the circuit. She was determined to be the first.

Aketzalli completed the Appalachian Trail in 2018 and the Continental Divide Trail in 2019. Before her completion of the PCT in 2017, Aketzalli had never camped, seen snow or wildlife, or visited the U.S.

In 2019, she became the first Mexican to complete the Triple Crown of Hiking.

After racking up 8,702 miles on multiple long-distance trails spanning the U.S., Aketzalli looked back to her home country and saw a lack of opportunity for others to accomplish such a feat.

Aketzalli said that the independence and confidence gained on her travels proved to be invaluable beyond just recreation. She hopes to empower other women, particularly in her home country, to hone those attributes.

To that end, Aketzalli is working to extend the PCT south to the tip of Mexico’s Baja California Peninsula, and, by doing so, create more opportunity for people in her home country to share some of the same experiences she has had.

Since finishing the Triple Crown of Hiking, Aketzalli has been speaking at conferences and building networks with similarly passionate people in an effort to bring the sport of thru-hiking to Mexico.

“It’s very hard work, but I’m positive it can happen,” she said of the considerations involved in expanding the PCT and introducing the sport to Mexico.

Aketzalli said she sees the effort as not only a way to encourage independence and stewardship for wild places, but also as an economic boon for areas that the trails pass through.

Right now, Aketzalli is trying to build a support network with organizations and individuals in the U.S. to organize and introduce thru-hiking to Mexico.

Aketzalli returned to her home country at the end of August, determined to map and blaze the PCT extension. She hopes to start her scouting efforts this December.

In Leadville, Aketzalli took advantage of the close-by biking and hiking opportunities to train for her trail scouting efforts in Mexico. She promised a return to the High Rockies on account of the opportunities, community and support she found here.

Zelzin is amazing! I met her when she passed by Damascus, VA, when she was hiking the AT. She stayed with us a couple of days. As a Mexican too, I know the obstacles and dangers that hikers, especially women, face these days in Mexico. I was a hiker in Mexico in the 80’s and it was much safer.