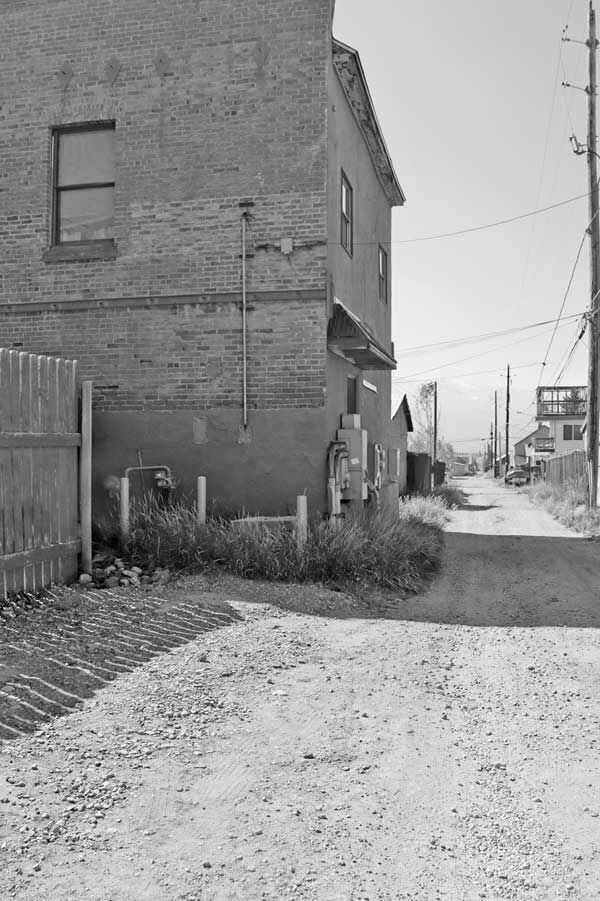 This is Tiger Alley looking west from Harrison Avenue, where many footpads once plied their trade. A footpad is a robber or thief operating on foot. To the left is the Pioneer Club, which offered a bar, gambling and ladies of the evening during State Street’s heyday. In fact the brothel run by Ma Brown at that location didn’t close until 1972. It is now condominiums. Not visible next door is the Pastime Bar, also dating back to Leadville’s early days. At one time, 64 saloons could be found on State Street. 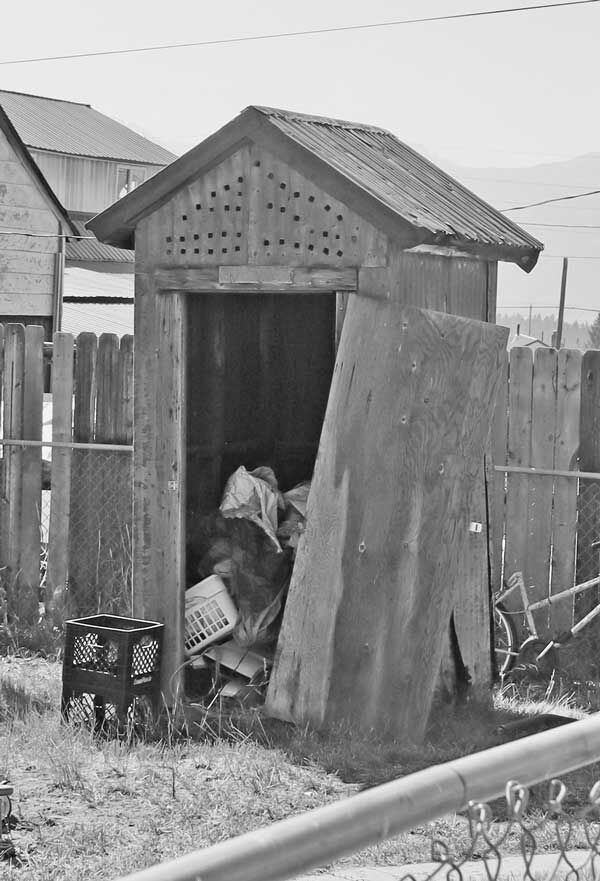 An outhouse along Stillborn Alley appears to be used now for storing trash. Before sewers were installed, outhouses were where most people disposed of trash and garbage, if they didn’t just throw it into the alley.

This is Tiger Alley looking west from Harrison Avenue, where many footpads once plied their trade. A footpad is a robber or thief operating on foot. To the left is the Pioneer Club, which offered a bar, gambling and ladies of the evening during State Street’s heyday. In fact the brothel run by Ma Brown at that location didn’t close until 1972. It is now condominiums. Not visible next door is the Pastime Bar, also dating back to Leadville’s early days. At one time, 64 saloons could be found on State Street.

An outhouse along Stillborn Alley appears to be used now for storing trash. Before sewers were installed, outhouses were where most people disposed of trash and garbage, if they didn’t just throw it into the alley.

Until I moved to Leadville, my ghostly experiences were mostly tales told around the fire at summer camp.

But then I came here and, oh boy, it seemed everyone had a ghost story. Some people even had ghosts of their own.

I’ve heard the tales of ghosts at the Delaware Hotel, the Tabor Grand, Hyman’s Saloon, the Tabor Opera House, several private homes and various mines in the district. I’ve listened to ghost hunters at the mining museum, and I’ve hosted a few at the Herald Democrat building. I’ve taken several of Neil Reynolds’ tours of the Evergreen Cemetery after dark. These weren’t really ghost tours, but try standing in the middle the cemetery in total darkness listening to a story of murder or mayhem in Leadville’s early days and not begin to wonder what lurks around the next tombstone.

Have I had an actual ghostly experience? Well, no.

I haven’t seen any ghosts at all although I keep wishing that the ghost in the former Cookies with Altitude store next door might appear in our space since Cookies has moved. This ghost was angry because all the cooking implements at Cookies were designed for someone right handed rather than left handed (or it might have been the other way around). Perhaps she also changed locations.

The Herald basement attracts ghost hunters because it is old (1895) and its first use was as a mortuary. It’s fair to speculate that a spirit or two might have accompanied the bodies that were moved in and out of the building back in the day.

So what is the most haunted place in Leadville/Lake County?

Well, if I were a serious ghost hunter, I’d head down to Tiger Alley and Stillborn Alley, the alleys on either side of Second Street, once known as State Street.

State Street was infamous enough with its theaters, gambling houses and saloons. But walk out behind the buildings lining State Street back then and the darkest side of Leadville would emerge.

An article in the Dec. 4, 1880 Leadville Weekly Democrat said that if the Democrat could chronicle all the crimes that have been concocted and committed and could give the history of all the various criminal characters that have been harbored in Tiger Alley, it could give a chapter second to none that might be written on Five Points in New York, the most dangerous slum in the world during the late 19th century.

Tiger Alley was only 20 feet wide, running from Harrison Avenue to Pine Street. Most of the State Street businesses stretched back only halfway to the alley, leaving room at that time for various buildings including three log cabins once used by a local criminal named Frank Sales and his accomplices. Most of the buildings on State had back doors, and the thieves operated by luring men, especially those with big bankrolls, out the back doors where they were attacked and robbed.

The story of how Robert Bogle met his demise mirrors many such incidents on Tiger Alley after dark. The Dec. 1, 1901 Herald Democrat, relates how Bogle, a lunch-counter proprietor on State Street, was beaten and robbed at the mouth of Tiger Alley, leading to his death. It was believed that Bogle had $400 or $500 on him and was wearing two diamonds.

Mrs. James Simpson, proprietress at the Carbonate theater, reported she heard cries for help around 3 a.m. They came from Tiger Alley. Loud and strong initially, they grew fainter and finally became inaudible. Simpson shrugged them off, saying that this was not unusual for Tiger Alley.

Suicide was common along both Tiger and Stillborn Alleys. The Nov. 24, 1883 Leadville Chronicle noted that there had not been a suicide or suicide attempt for more than a week, finding this newsworthy. The next day “Frankie Edwards,” alias “Frankie Moore,” alias “Short-Haired Frankie,” a dance hall girl, ended her life.

A woman at the scene made this comment: “You know these girls nearly all take morphine all the time. They just pour it out in their hands and take it without knowing, or caring for that matter, how much they take.’’

Frankie lay in bed, her body still warm, surrounded by “haggard looking men and women” who had been her acquaintances, a reporter said

Women in the sex trade tried to keep from getting pregnant through various home remedies. When these failed, they usually did what they could to end the pregnancy. Were many of those stillbirths really abortions or murders? Was pregnancy the cause of many of those suicides?

Both alleys were full of filth. In Leadville’s early days the alleys were places to throw out garbage and trash. Stillborn and Tiger were two of the worst.

According to the April 27, 1880, Herald Democrat, in some places offal was piled up three to four feet along Stillborn alley.

“There is enough venom to contaminate the atmosphere the whole city,” the newspaper said. “A vile stench emanates from Tiger Alley which is well calculated to turn the passerby even if it doesn’t kill the residents.”

A stillborn baby in the area of State Street would be likely to be tossed into a privy or left along the side of the alley.

There were no social agencies in those days to help women in trouble, or, for that matter, to watch out for the children.

A policeman told a newspaper reporter on Aug. 23, 1880 about a woman he termed the worst mother in town. She lived on Stillborn Alley along with her three children, ages three, five and seven. The officer said that when the children misbehaved, she would lock them out of the house, sometimes for an entire night, despite the cold and snow. The oldest child was already trained to be an accomplished thief and the others were sure to follow in her footsteps.

That very night the children had been locked out in the rain while their mother was out on the town, the officer said. He did what he could, breaking into the house so that the children could go inside.

I walked along both Tiger and Stillborn Alleys earlier this month, not in the dark of the night but on a bright, sunny, fall afternoon. Tiger Alley was quite deserted. The Pioneer Club, now condominiums, remains from the old days along with the Pastime Bar. Bordering Stillborn alley is the RV Corral, so there is more activity. It completely takes up the space between Second Street and Stillborn Alley.

We all love the stories of the old West, the daring sheriffs, the legendary outlaws, the shady ladies with hearts of gold. We try not to think of the degradation that existed, the men who didn’t think twice about robbing and killing, the working girls who turned to alcohol and drugs to help endure the lives they had to live, some only 12 or 13 years old.

If there are ghosts in Stillborn or Tiger Alleys, these are the ghosts.