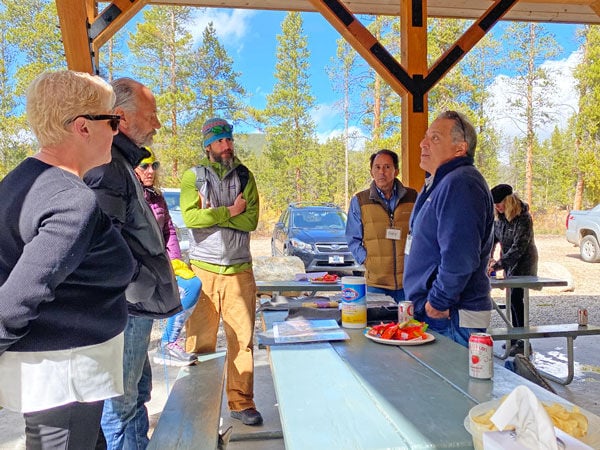 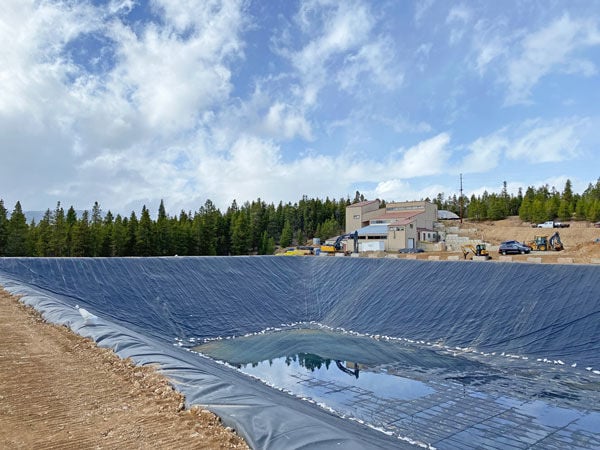 A 2.2-acre tailings pond is dug adjacent to the Leadville Mill. The pond can hold roughly 60,000 gallons of material, or one year’s worth of waste. 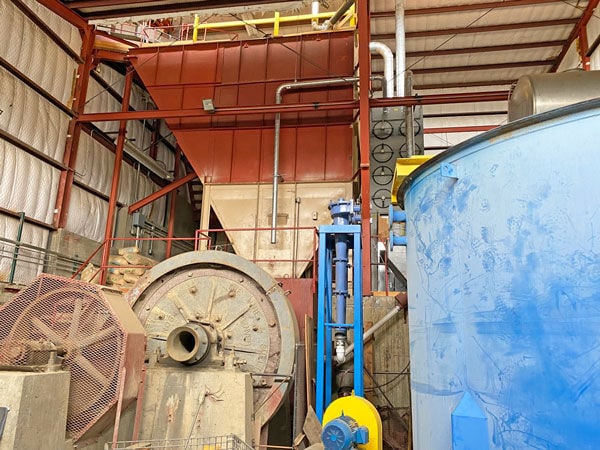 Equipment inside the Leadville Mill awaits the fate of Union Milling’s application with the state. If approved, piles of mining castoff will be processed at the mill, flowing from the red bin pictured top left through the cylindrical machinery below and eventually to the blue vat pictured bottom right.

A 2.2-acre tailings pond is dug adjacent to the Leadville Mill. The pond can hold roughly 60,000 gallons of material, or one year’s worth of waste.

Equipment inside the Leadville Mill awaits the fate of Union Milling’s application with the state. If approved, piles of mining castoff will be processed at the mill, flowing from the red bin pictured top left through the cylindrical machinery below and eventually to the blue vat pictured bottom right.

After extending the review period of Union Milling’s application to use a sodium cyanide solution at the Leadville Mill in July, the Colorado Department of Reclamation, Mining and Safety again requested more information from the applicant last week.

The Leadville Mill’s owner, Gary Knippa of CJK Milling, who purchased the property from Union Milling last year, is currently contracting with Union Milling to prepare the mill for potential operation. Together, the companies are proposing to process old piles of mining castoff throughout California Gulch and slag piles along U.S. 24 for gold and silver, which CJK Milling will sell.

After completing a feasibility study last summer, which involved material collected in California Gulch, Union Milling determined that the operation is not viable without the use of sodium cyanide, as opposed to flotation techniques that do not involve the potentially toxic solution. Although the proposed use of sodium cyanide is not unusual in the mining industry, several Leadville residents are concerned.

Although the Colorado Department of Reclamation, Mining and Safety (DRMS) told the Herald in July that a decision was slated for October, the department expressed additional concerns with Union Milling’s proposed tailings facility last week, and again questioned the use of sodium cyanide all together. Union Milling requested a 10-day extension of the application, during which time the operator will propose additional plans.

DRMS Environmental Protection Specialist Dustin Czapla said the department’s concerns with the proposed tailings facility lie with the facility’s proximity to residential properties. Resembling a large pit directly adjacent to the Leadville Mill, the 2.2-acre storage facility, where biproducts of the mill operation containing traces of sodium cyanide would be stored, is up-gradient from homes and residential water wells.

Currently, the tailings facility, which is triple-lined using geosynthtic clay liners and sensored to detect leaks, is built with two wells to monitor groundwater quality. According to Czapla, DRMS suggested a third well and additional changes to the facility to ensure that no contaminants would impact surrounding groundwater. “Even with monitoring wells,” said Czapla, “oftentimes it’s too late by the time a contaminant is detected.”

As it stands, the facility can hold roughly 60,000 gallons of product, or about one year of waste, according to Union Milling representative Nick Michael, who added that the waste would resemble wet sand. Once the storage pond is full, Union Milling would expand the pit south toward U.S. 24 and east toward Leadville Sanitation District property. Michael added that the mill operation would last approximately eight years and that the facility could eventually be buried.

Last weekend, CJK Milling hosted an open house at the Leadville National Fish Hatchery to discuss the tailings facility and other aspects of the proposed mill operation with locals. George Benson, who lives approximately 200 feet from the Leadville Mill, said he appreciated CJK Milling’s effort, but that many of his concerns, including noise and traffic related to the operation, were not addressed.

Last January, several Leadville residents formed the Concerned Citizens for Lake County (CC4LC), an ad-hoc group of locals who live in close proximity to the Leadville Mill. The group has since expressed their concerns through letters to DRMS and the Herald, some of which have been published over the last few weeks.

CC4LC also hired two attorneys who have filed a formal objection with DRMS and will represent the group during DRMS’s public hearing on the matter, which will not take place until DRMS is ready to make a decision, according to Russ Means, director of the minerals regulatory program for DRMS.

According to Ruth Goltzer, a CC4LC member, the group is primarily concerned about water, air and soil pollution, and noise, traffic and safety.

Michael said air and groundwater surrounding the Leadville Mill would be monitored on a daily basis and that acceptable contamination levels would fall in accordance with the Colorado Department of Public Health and Environment. Michael also believes that the tailings pond, which he called “state of the art,” is adequate in protecting against contamination.

Regarding noise, traffic and safety, Means said that is not something DRMS is explicitly reviewing and that the issue would fall with the Board of County Commissioners, who would also review the project, should DRMS approve Union Milling’s application.

According to Michael, Union Milling is planning to transport material from Leadville’s east side to the Leadville Mill about 23 times a day with three or four trucks. The trucks would travel from the east side along South Toledo and Monroe streets to U.S. 24 south of Harrison Avenue. Michael said he is devising a plan to work around high density areas, such as Monroe Street.

Union Milling plans to use the trucks and tailings piles in California Gulch to feed the Leadville Mill. Shortly after Knippa formed CJK Milling in January 2020 for the sole purpose of bankrolling the mill project, the company purchased over 100 plots of land in California Gulch, including the Penn Mine, the plot from which Union Milling would initially pull material. Knippa said the company would move on to the additional plots of land after the Penn Mine is dry, and that no historic headframes would be damaged.

Goltzer added to CC4LC’s concerns that operations in California Gulch would not only damage roads, but also disrupt the U.S. Environmental Protection Agency Superfund remediation work that began in the 1980s after the Yak Tunnel failed, releasing toxic materials into the surrounding waterways. Knippa, however, argues that his operation is a continuation of that cleanup effort in that Union Milling will remove piles of mine waste from the area.

Although Knippa plans to keep the properties private after the piles are processed, the investor said vegetation and tress will be planted on the plots and that he would consider easements for trails and recreation. Knippa added that he and Michael have discussed installing a solar farm at the Leadville Mill site. At this time, the company is not planning to bring in material from outside of Lake County.

“I don’t want to be the one responsible for damaging Lake County’s environment,” said Michael, who lives in Denver. “Our intention is to do something positive here. The concerns we hear from locals are legitimate. We believe we are taking the necessary precautions, but the state is saying it’s not enough, so we’ll keep working to make changes that work for everyone.”