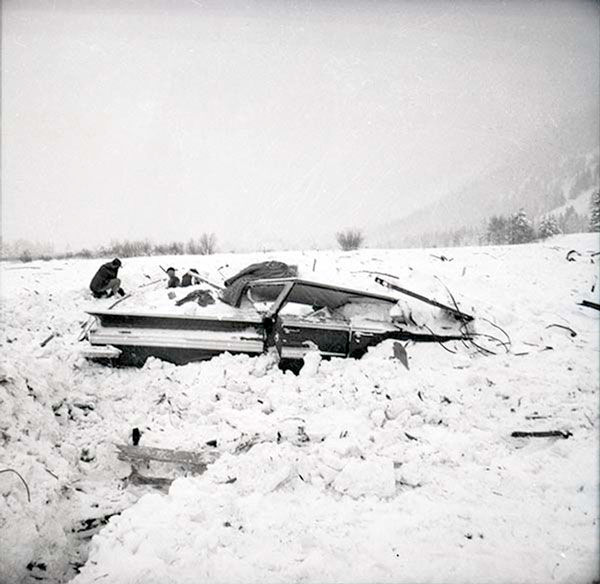 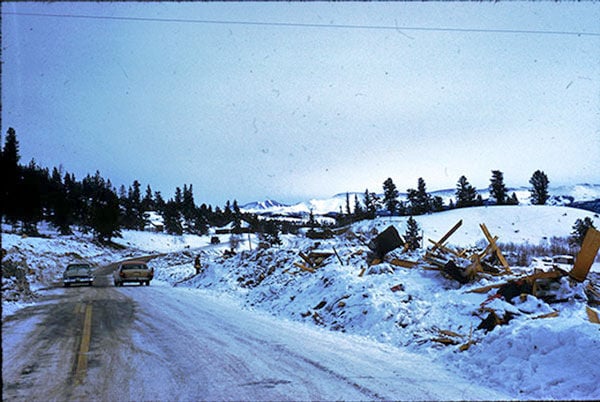 Avalanche debris is seen along the shoulder of Hwy. 82 after a massive avalanche slid off Mount Elbert in 1962. 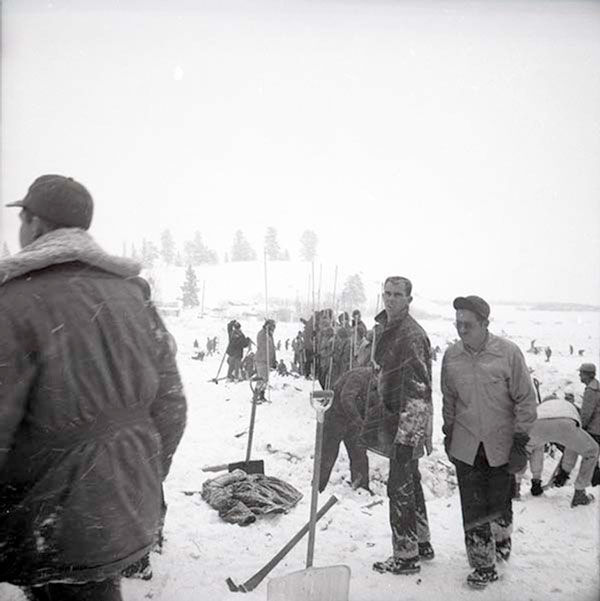 Volunteers gather shovels and probes near Twin Lakes before heading out to search for missing persons. The Herald reported that approximately 750 volunteers joined the search mission on the day after the avalanche. 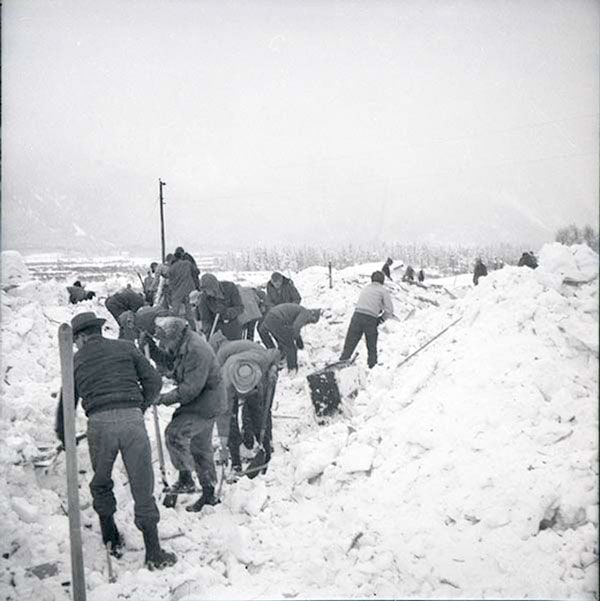 A search party shovels through avalanche debris near Twin Lakes. One home was covered by 15 feet of snow; the avalanche pushed another home 500 feet from its original site.

Avalanche debris is seen along the shoulder of Hwy. 82 after a massive avalanche slid off Mount Elbert in 1962.

Volunteers gather shovels and probes near Twin Lakes before heading out to search for missing persons. The Herald reported that approximately 750 volunteers joined the search mission on the day after the avalanche.

A search party shovels through avalanche debris near Twin Lakes. One home was covered by 15 feet of snow; the avalanche pushed another home 500 feet from its original site.

The following article, reprinted here with some edits, originally appeared in the Herald Democrat on Monday, January 22, 1962.

Tragedy struck the tiny village of Twin Lakes, 18 miles southwest of Leadville, Sunday when a mass of snow slid down giant Mt. Elbert, sweeping over four houses and snuffing out at least six lives.

Two persons were rescued from the buried wreckage of their home. William Adamich, 35, and his wife Barbara, 30, were hospitalized at St. Vincent’s hospital with frostbite, cuts and bruises. Their condition today was reported improved by hospital officials. Their son Billy, 9, was found dead. Another son, Michael, 7, is still missing, and rescuers are working frantically today to find him. However, little hope is held that he will be found alive.

The other two houses were vacant. The Joe Shelton family, which had previously lived in one of the homes, had moved to Glenwood Springs. The Joe Sheltons had planned to go to the cabin for the weekend, but business matters kept them at home. Shelton said, “If it hadn’t been for that, we probably would have been buried here, too.”

Electric clocks in the Twin Lakes area which stopped at approximately 5:31 a. m. indicated that this was the time that the slide occurred. However, it was not until 8:30 a. m. that anyone discovered the disaster.

Nels Lindstom, who lives two houses west of the G. L. Shelton house, told The Herald Democrat that he arose at 8:30 a. m. and looked out to see the devastation. He said he had no prior knowledge that anything had occurred. As soon as he discovered the slide, Lindstom said he and a tenant of his, Bud Rowe, walked to the General Store and attempted to phone the sheriff’s office. However, the telephone lines were down and the call could not be completed.

Lindstom and Rowe then hailed a car occupied by skiers from Oklahoma and asked them to notify the sheriff’s office, which they did at 8:50 a. m. Rescue operations got underway immediately.

Bob Rinker of the Twin Lakes Lodge then began probing for victims of the slide. He found Adamich at 9:30 a. m., and Mrs. Adamich was rescued at 10 a. m., just one-half hour after her husband was found.

The snowslide is believed to have started 13,000 feet up Mt. Elbert. Snow weighing in the thousands of tons loosened itself and began its rumbling way to level ground. The overhang of snow had apparently become loosened by the Chinook wind that roared down the area Saturday night and Sunday morning. The temperature in the Twin Lakes area at that time was approximately 19 degrees.

The usually northern direction of the wind had changed during the recent storm and winds had commenced blowing in from the south, completely changing the usual pattern of snow overhang in the high mountains.

As the ocean of snow wound its way down the mountainside, trees, rocks and dry timber were intermixed, forming a battering ram of great force. The course off the south side of Perry’s Peak is such that a minor slide would have been stopped on the flat directly above the devastated area. This flat is some 200 feet across, but it was not able to hold the force of Sunday’s slide.

By some quirk of nature, the slide appeared to have leapfrogged this natural barrier and came tumbling onto the heavily wooded hillside above the group of six houses on the highway just outside the village of Twin Lakes.

The slide was approximately 3,500 feet wide on the highway level, and then fanned out to approximately one mile in width in the meadow below the Adamich residence.

The Joe Shelton home was pushed in a northwesterly direction into the meadow below the highway. This meadow was covered to a depth of 15 feet by the slide. The home was found in major sections at the extreme end of the slide. One corner of the house was found intact, and having slid with the corner section was the refrigerator, which was on its back with the door upright. It was only slightly dented. The roof section of the home was found approximately 200 feet from the corner section, having been turned over with the shingles used as sled runners. Light fixtures were still partially in place, but all shades and lamps were simply snatched from the fixtures by the force of the slide.

Not too far from the room section was found a garage “creeper” completely intact with the exception of one caster which had been sheared off. A slab of concrete painted a dull green was found near the roof section. This had apparently been a step or floor section, and it was buried by only two inches of snow. Other sections of the Joe Shelton home were scattered in the area in a haphazard manner.

The home of the William Adamiches was located just below the highway on the left side of the road, leaving the village of Twin Lakes going toward Independence Pass. This was a frame construction. Apparently this home simply “exploded” from the force of the slide. It was pushed some 500 feet from its original site when the snow began depositing various splintered pieces over the meadow. The roof section, under which were found the only human survivors of the slide, was completely lifted from the house and had slid out into the meadow.

Apparently the force of the snow created a wave action that carried Mr. and Mrs. Adamich up under the ceiling and thus gave an air space and protection from the crushing weight of the snow. Mrs. Adamich was found approximately 75 feet from her husband. They were discovered through their cries for help. The other survivor of the household, the family dog, was found under the kitchen table and was freed.

The G. L. Shelton home, located at the extreme end of the slide area, was moved only some 25 feet from its original foundation, but the body of Steve Shelton was found buried by 10 feet of snow and debris. His body was recovered at approximately 1 p. m. Sunday. He was the first victim to be found after the Adamiches were rescued in the morning.

DEBRIS SWEPT ON WAVES OF SNOW

The crushed and smashed automobiles, trucks and furniture of the victims were swept on the waves of snow like miniature toys. Furniture looked like so much kindling wood after the forces of nature shoved and pushed it down the slide area.

Directly above the highway a large mine boiler from the Gordon Tiger mine, directly in the path of the slide area, was swept down. A fuel tank approximately 15 feet in diameter was also deposited just above the highway. Buried near the remains of the Adamich household is a coil of mining cable approximately one and one-half inch in diameter and several thousand feet in length which could have been swept down from the mine with the slide.

The first rescue workers at the scene reported finding the bodies of two deer which were carried down by the slide. It would be entirely possible that these two citizens of the forest could have been responsible for starting the holocaust.

For a time Sunday it looked as though a second slide might come plummeting down to the village of Twin Lakes, and all but the rescue workers were warned to stay out of the area. However, this morning the Colorado State Patrol, with a 75 mm Howitzer, used five shots to knock down the largest potential slide in the area. They also knocked down other potentially dangerous-looking snow further west in the canyon.

After the first call for help came into Sheriff Clarence McMurrough’s office, hundreds of men volunteered their help. Members of the Lake County Rescue squad, of course, were the first called out, and in their usual capable ways began rescue operations.

Volunteers went to the disaster area immediately after they heard of the tragedy by word of mouth and appeals broadcast over Radio Station KBRR. The number of volunteers at the peak hour of the search Sunday afternoon was approximately 750.

Response from businesses in the area was a real tribute to the generosity of persons who live in this high country. Sandwiches, coffee, gloves, cigarettes, cookies and candy bars all reached the disaster area for distribution to the workers almost immediately. Ladies’ groups, individuals and the World’s Highest Jeep Club, to name a few, were quickly on hand to offer aid and assistance.

People came from Climax, Buena Vista, Granite, Leadville and the entire surrounding area to aid in the rescue operations. Climax Molybdenum Company sent equipment to the site, and Lake County equipment was also put to use immediately to clear the area.

But the heartbreaking task was left to the individual rescue workers who probed and shoveled for the victims. Each man shoveled as if his life depended on it and secretly hoped that he would not find a dead body, but a survivor. The stark tragedy of the disaster was mirrored in the faces of each rescue worker.

Traffic was stopped to the left side of the highway entering Twin Lakes to avoid a parking problem, and workers walked to the scene of the tragedy. At the time people were warned to stay away because of the possibility of a second slide, cars were parked for three and one-half miles along the east side of the highway. It was estimated that approximately 2,000 persons were in the area at 2:30 p. m.

United States Army personnel stationed at Camp Hale and Fort Carson came to the disaster site almost immediately, and Army food was also distributed to the rescue workers. Army personnel continued working in the area today, along with other Lake county volunteers.

The search for young Michael Adamich was halted at approximately 5:30 p. m. when darkness hampered the rescue workers. However, workers took up the operations at dawn this morning and continued through the day seeking the young snowslide victim.