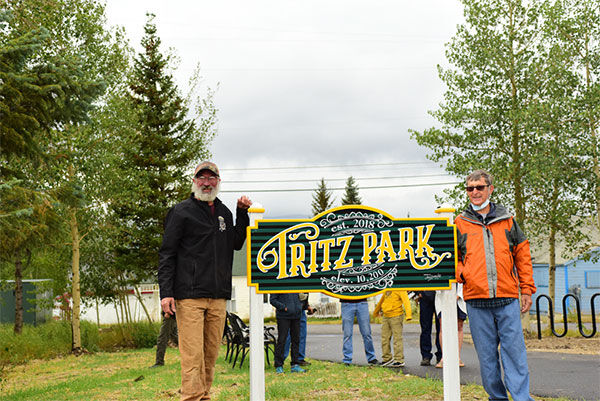 Kevin Mastin, left, and Howard Tritz pose alongside the sign Mastin created for Tritz Park. The sign was unveiled as part of Saturday’s ceremony naming the park in Tritz’s honor. 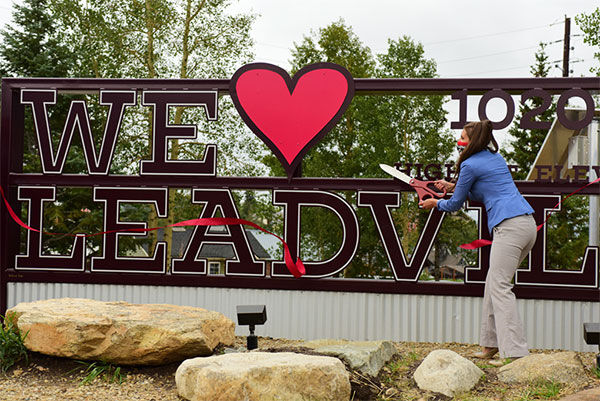 Kevin Mastin, left, and Howard Tritz pose alongside the sign Mastin created for Tritz Park. The sign was unveiled as part of Saturday’s ceremony naming the park in Tritz’s honor.

The City of Leadville dedicated Tritz Park in honor of long-time community member and key founder of the Mineral Belt Trail, Howard Tritz.

About 20 community members gathered in rainy weather on Saturday at the park’s North Poplar Street location to honor Tritz, introduce new improvements and officially open the public space with its new name.

Mayor Greg Labbe began the ceremonies with an address thanking Tritz for his community involvement and declaring the park Tritz’s namesake.

Tritz and Labbe opened the section of the newly aligned Mineral Belt Trail that passes through the park with a ribbon cutting. “There’s no doubt I’m proud of the honor,” Tritz said while addressing attendees.

In a second address, Labbe thanked Sarah Dallas, the city’s administrative services manager, and Leslie Cook-Knerr, former director of the Lake County Community Fund, for the work the two put into commissioning the new “We Love Leadville” sign and coordinating the different parties that contributed to the park’s improvements.

“Certainly this has been a heart-and-soul project,” Dallas said of the time and financial support required to complete the project.

The “We Love Leadville” sign, benches, a pedestrian-activated crosswalk and landscaping features are among improvements made to Tritz Park this summer.

1The decision to name the park in recognition of Tritz was made by the Board of County Commissioners in 2018. In the years since, collaboration between city and county government, local organizations and community members made the plan come to fruition.

“So much heart and effort went into making this happen,” Labbe said in summary of his acknowledgments to Tritz, Dallas and Cook-Knerr.