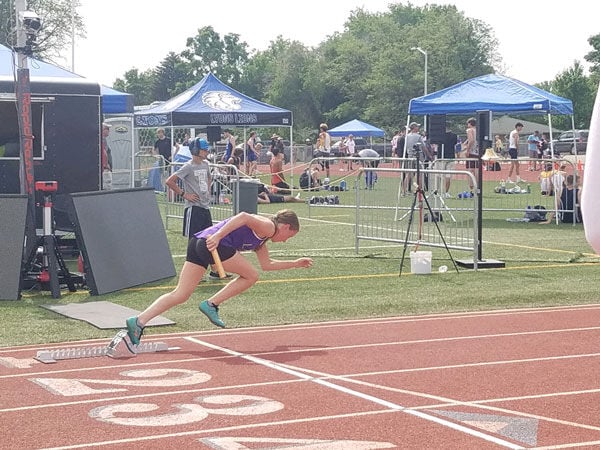 Aurora Marruffo takes off in the 4 x 200 meter relay. 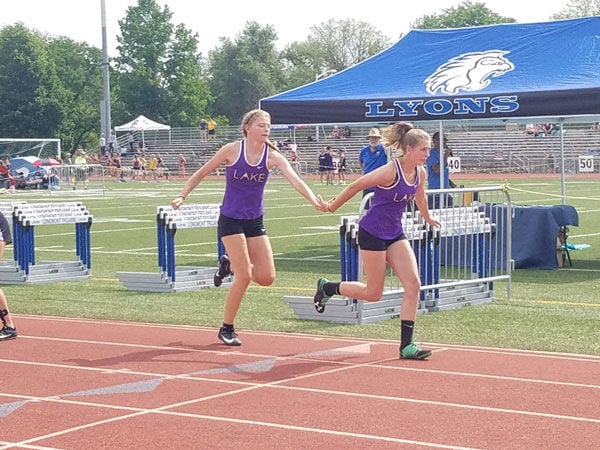 Aurora Marruffo takes off in the 4 x 200 meter relay.

Last week provided two opportunities for Lake County High School’s track and field athletes to improve their marks before the state-qualifying rankings were finalized. On Tuesday, June 15, the Panthers competed against six other 2A schools at South Park High School in Fairplay.

Aurora Marruffo took first place in the long jump with a new personal record (PR) of 15’ 10,” solidifying her spot in the state meet competition. Adele Horning ran the 3,200 meter run mostly by herself, but her time of 14 minutes and 5 seconds was enough to snatch the final state-qualifying spot.

Maya Mendoza cut four seconds off her PR in the 400 meter to run 1:11 and take third in that event.

The girls 4 x 200 meter relay team of Marruffo, Jaycee Windorski, Kaytlin Sprague and Coleman dropped three seconds off their season-best time, but they may come up two positions short of qualifying for state.

Anthony Martinez improved his long jump mark to 20’ 10.5” on his way to victory in that event. Obed Tarango reached third place and a PR of 16’ 11.5” in the long jump.

Fabian Jimenez, Jace Peters, Lazaro and Martinez teamed up in the 4 x 100 meter relay to finish in 44.97, the fastest that a Lake County team has run in over 12 years.

On Friday, a smaller contingency of Panthers competed in the St. Vrain Invitational, a huge meet that included 84 schools from all participating divisions.

Spurred on by a couple of fast opponents, Martinez finally broke the Lake County High School record in the 110 meter hurdles. The previous record was 15.15 seconds and Martinez finished in 15.06, which was also good enough for secind place at the meet. Martinez also set a PR in the 300 meter hurdles with a time of 41.80 seconds, moving him up to fourth in the state rankings.

Peters slashed 22 seconds off his 3,200 meter time to finish in 10:33 and sixth position in the state rankings. Peters also accomplished a PR of 4:50 in the 1,600 meter race and improved his pole vault best to 11’ 9,” now ranking ninth in that event.

Windorski cleared a personal best 4’ 10.5” in the high jump and moved into 10th place in the state rankings.

At this point, 13 Lake County athletes have qualified in 22 entries at the state meet because they finished the regular season ranked in the top 18 of their events. A few more sit just beyond the 18th spot and await news of their possible acceptance on Monday afternoon. The state meet will be held at Jeffco Stadium in Lakewood on June 24-26.